How to whip up a conic shelter for shade and protection 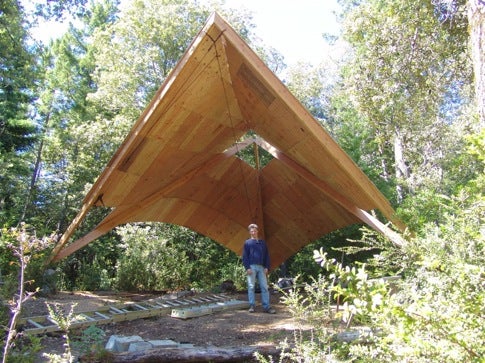 My first encounter with a Conic Shelter was in 2002 and while I cruising Black Rock City, the temporary Nevada city also known as The Burning Man Project. The soft, curved, contiguous wood canopy of the structure that I saw there had a remarkably organic feel when placed among the many shade tarps, parachutes and tents that make up the fleeting metropolis. The sound of fabric snapping in the blasts of strong desert wind is so common to playa life that the Conic Shelter was starkly quiet by comparison. The sweeping canopy of bending wood panels seemed to defy all building logic. A closer look at the fastening system produced in me a late “ah ha” as I reasoned that I actually might be able to make one of these! So I went digging for more DIY info.

The originator of the Conic Shelter design is Chuck Henderson. Chuck started out on the conic concept in the 1970s and completed his first structure in 1974. Clearly the idea had merit because by 1982 he met with Buckminster Fuller, who encouraged him to keep working with this design. With many new varieties under his belt he now offers construction manuals and a design kit for $100. You can also join his beta program for $500 to get additional materials and help. The structures are known to withstand heavy winds and snow loads.

As I consider the ways ways that I can add shade my New Mexico homestead—an outdoor workshop and kitchen, community space, and a dinning area to name a few—I’m considering taking on a Conic Shelter. I’ve deduced the basic steps:

The support structure is modeled after the ancient pyramids of Egypt. (If you spun a pyramid like a top it would leave a conical pattern.) I particularly like that no wood touches the ground, which extends the life of the structure. You can see here the elegant solution that Henderson came up with for attaching the beams to the concrete forms.

Have any experience with Conic Shelters that might be useful as I look into my own? Let us know in the comments.