After 14 years of work and $5.5 billion, the LHC has survived faulty magnets, avian sabotage, and the threat of... 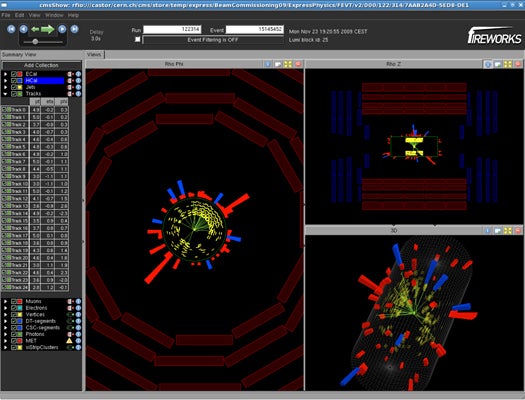 After 14 years of work and $5.5 billion, the LHC has survived faulty magnets, avian sabotage, and the threat of malevolent time travelers to finally collided its first particles.

Three days after the accelerator generated its first proton beam since shutting down last year, the giant particle accelerator sent two beams of protons speeding towards each other at nearly the speed of light. With the collision, the LHC got back on track to find the elusive Higgs boson.

The collision took place at an energy of 450 GeV, far below the maximum power of the accelerator. By Christmas, LHC scientists hope to generate collisions twice as powerful as yesterday’s test. However, even at that doubled energy needs a sevenfold-increase to reach the LHC’s maximum capacity, and the level where scientists might observe the Higgs boson.

The picture above shows the collision as recorded by the Compact Muon Solenoid (CMS) detector. The red and blue bars represent subatomic particles flying forth from the proton collision like atomic shrapnel. When the LHC finally ramps up to full power, the 3,600 scientists at the will witness the most powerful particle collisions ever engineered by man.

Let’s hope they can keep the machine working, and safe from birds, until then. 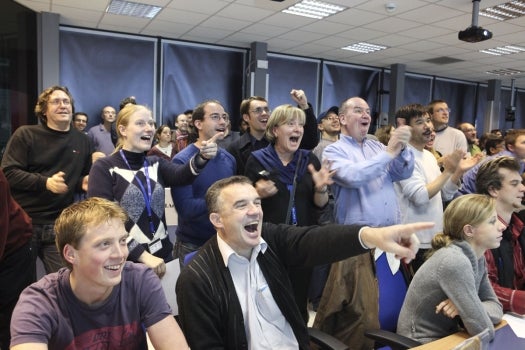 And the Scientists Rejoice