Say I’m Inside the Large Hadron Collider and It’s Revving Up. Should I Be Concerned?

Is that a likely situation? No matter; Popular Science has the answers 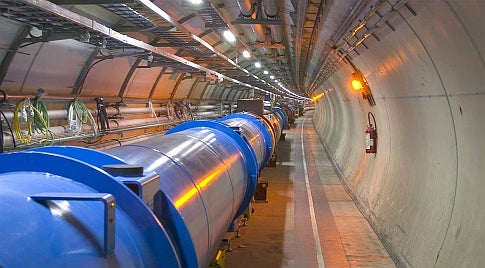 Well, it’s never a great idea to stand next to a machine that could create black holes, but the magnets that steer the proton beams around the planet’s most powerful particle accelerator would probably spare you from excess radiation. Then again, there is the off chance that some 300 trillion protons could erupt from the device and kill you on the spot.

Even though the LHC’s twin beams will travel in protective isolation through 17-mile-long, two-inch-wide pipes sucked to a near-perfect vacuum, some of those protons—potentially billions—will inevitably wander off the track. When they do, they will slam into the magnets that steer and focus the beam, or hit other hardware, gas molecules or protons. These collisions will generate a mess of secondary radioactive particles, explains Mike Lamont, an LHC machine coordinator, filling the tunnel with a field of radiation roughly equivalent to that of a full-body CT scan. That’s not a dangerous amount of radiation to be exposed to for a few minutes, but longer than that, and you might suffer some cellular damage. (It’s important to note, though, that the security measures in place at the LHC make it virtually impossible to sneak into the tunnel when the beam is on.)

If engineers were to lose control of the beam, however, watch out. The beam is only one millimeter wide, yet it contains 320 trillion protons moving just shy of the speed of light. (That gives it about the same momentum as a 400-ton train speeding at 95 mph.) It would plow through the magnets and unleash a fatal cascade of high-energy particles and radiation.

And that’s just if you were near a runaway beam. If you stood in its way, it would burn a hole right into you, Lamont says. “A human body wouldn’t stand a chance.”

Ask Us Anything
Physics