Physicists at CERN may have caught the first whiffs of the elusive Higgs boson, researchers announced this morning, but more... 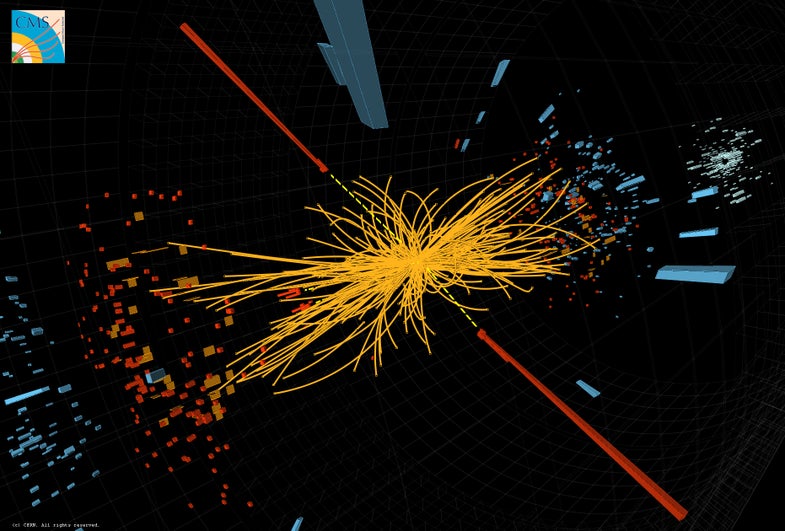 Physicists at CERN may have caught the first whiffs of the elusive Higgs boson, researchers announced this morning, but more numbers must be crunched before anyone will claim its discovery. Bumps in signals at the Large Hadron Collider are not surefire proof of the so-called god particle, at least not yet — but at the very least they’re enough to keep faith in our modern theories of physics.

Two detectors have been sifting the detritus from ultra-high-energy proton collisions at the LHC, and so far they have seen “tantalizing hints” of the Higgs, physicists said at a news conference. The particle weighs about 125 to 126 giga-electronvolts, according to evidence from the Atlas and CMS detectors, respectively. That’s about 125 times heavier than a proton.

If it exists at all, it must weigh between 117 to 127 GeV, according to the new measurements. That relatively narrow band is the result of previous LHC (and Tevatron) experiments that already ruled out other suspected sizes.

“As of today what we see is consistent either with a background fluctuation or with the presence of the boson,” said Guido Tonelli, spokesman for the CMS experiment. “Refined analyses and additional data delivered in 2012 by this magnificent machine will definitely give an answer.”

Atlas spokeswoman Fabiola Gianotti also demurred — “This excess may be due to a fluctuation, but it could also be something more interesting. We cannot conclude anything at this stage,” she said. “We will not need to wait long for enough data and can look forward to resolving this puzzle in 2012.”

The world over, physicists (and those with physics envy) watched online and in university conference rooms in heady anticipation. Tuesday’s announcement was widely expected to bring news of a Higgs discovery, and while neither the Atlas nor CMS teams were claiming such a breakthrough, they haven’t not seen it, either. 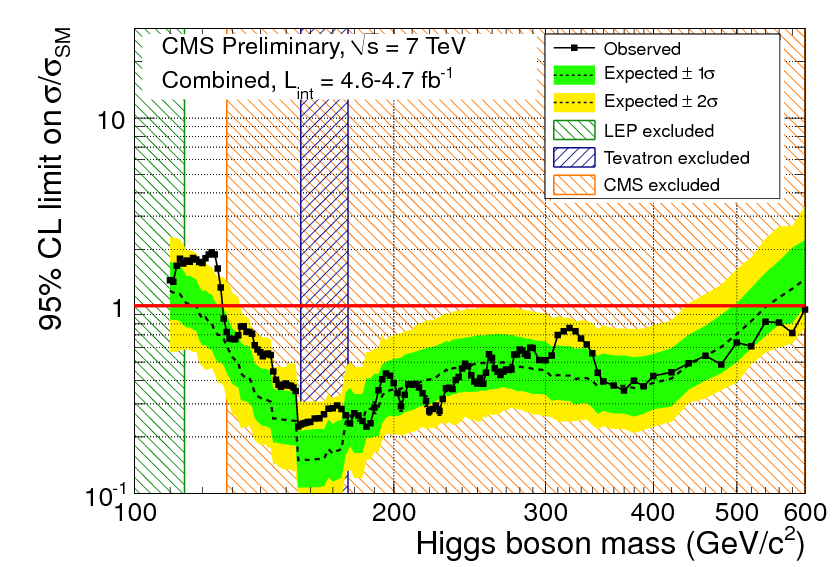 Exclusion limit on the mass of the Higgs boson at 95% confidence level (below red line). The analysis is based on proton-proton collision data collected by CMS in 2010 and 2011. The hatched bands show the mass regions previously excluded by CERN’s Large Electron Positron collider, Fermilab’s Tevatron, and now by CMS. The dashed line and the green and yellow bands show the average expected CMS sensitivity corresponding to the actual amount of data analysed.

Or, as Guardian blogger John Butterworth awesomely explains it:

A physicist saw an enigma
And called to his mum “Flying pig, ma!”
She said “Flying pigs?
Next thing you’ll see the Higgs!”
He said “Nah, not ’til it’s five sigma!”

At the LHC, high-energy collisions between protons shatter the particles into their constituent parts, and at really high energies, physicists expect to see the Higgs boson emerge from the mess. The suspected smidgen of energy is thought to endow all other particles with mass, hence its importance. It is also the only particle yet to be observed in the entire standard model of particles and forces — so not finding it at all would be really interesting, too.

CERN managers had already decided to keep the LHC running through 2012 to improve their odds of finding the Higgs. More data is being generated all the time, so the Atlas and CMS teams are optimistic for a true five-sigma result sometime next year.

We have seen previous rumors of a Higgs sighting before, but nothing as promising as Tuesday’s announcement. On top of the statistical significance (for Atlas, at least), it’s crucial that two different detectors have seen something intriguing, and in roughly the same mass-energy range, as the NYT points out.

One of the most amazing things about today’s announcement is the possible new pathway it opens. If the Higgs is indeed between 117 and 127 GeV, that’s actually pretty little, in relative terms. At one point physicists thought it could weigh as much as 600 GeV. If it’s small, as these results suggest, that means it must come with another particle to stabilize it. So no matter what we learn with more data, one thing is certain — even more discoveries are yet to come.