Can This Machine Rescue Physics?

Suddenly the U.S. isn't the center of the physics universe. The answer: build the International Linear Colliderâ€”one of the most powerful (and expensive) pieces of equipment on Earth 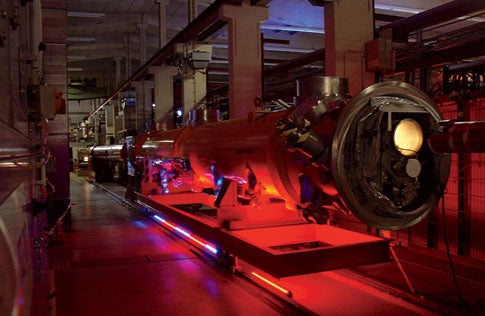 When the world´s biggest particle accelerator, the Large Hadron Collider, opens next year near Geneva, the focal point of the high-energy physics world will shift from U.S. soil for the first time in half a century. Bummer, indeed. But America´s brightest are busy devising a rescue plan. In April, a panel of U.S. science and business leaders presented a bold comeback strategy: to build the biggest particle accelerator yet, a multibillion-dollar, 19-mile-long piece of mega-machinery called the International Linear Collider (ILC) that can smash particles together at near light speed.

Detractors in the physics commu-nity say a push for the ILC could smother less glamorous projects. And the last time the U.S. took on a science research project of this scope-flash back to the Superconducting Super Collider, circa 1993-Congress canceled it partway through construction and shifted most of the funds to other areas. Bitter memories of the SSC´s demise and the ensuing money crunch still linger.

But not pursuing the ILC, the National Research Council panel argues, could prove devastating. “It would mean giving up on the most fundamental area of science there is,” says Harold Shapiro, president emeritus of Princeton University and chair of the panel.

The ILC will collide together electrons and positrons (fundamental particles with no constituent parts), enabling physicists to fully explore the kind of brain-bruising questions that would keep even Einstein up at night. Sure, we believe “dark matter” makes up most of the universe, but what the heck is it? Supersymmetric particles, or something else? While we´re at it, how did the universe begin? How will it evolve? Does it have 10 dimensions? Eleven dimensions? More?

Although Switzerland´s Large Hadron Collider, or LHC, will certainly chip away at these questions as it smashes protons together, scientists will need the more precise measurements of the ILC to fully answer them. Whereas the LHC might prove, say, the existence of the famed Higgs boson-the so-called God particle that gives matter its mass-the cleaner collisions at the ILC would let scientists figure out how the elusive particle actually works.

Aside from solving some of nature´s toughest puzzles, the panel´s report concludes that hosting one of history´s most ambitious physics experiments will draw talent to the U.S. from all over the globe, offer more opportunities to U.S.researchers, and inspire American kids to take up careers in science.

All good things. Yet at what cost? The panel suggests that the U.S. spend $500 million over the next five years simply researching the technology required to build the ILC-a mere $30 million less than the total U.S. contribution to the entire LHC project. (Because the host for the ILC will be chosen by a multinational panel, a kind of International Olympic Committee for physics, such a nicety should put the U.S. in a strong position to bid for it.) The current estimate for the whole shebang: $12 billion, with the host country probably picking up 50 percent of the tab.

Norman Augustine, a former chair of Lockheed Martin and a member of the panel, says the initial half-billion-dollar investment, at least, is a must. “the U.S. has from day one been the global leader of the field,”he explains. “If we miss the ILC, that will be tantamount to folding our hand.”