Rosetta Spacecraft Will Orbit A Comet For Nine Extra Months

It may use the time to try some risky maneuvers 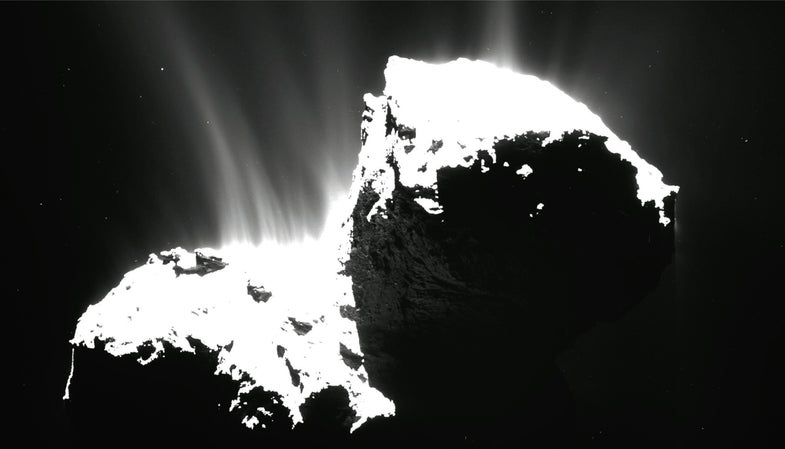 Gas and dust jet out from comet 67P/Churyumov-Gerasimenko as it gets closer to the sun. ESA/ROSETTA/MPS FOR OSIRIS TEAM MPS/UPD/LAM/IAA/SSO/INTA/UPM/DASP/IDA
SHARE

The spacecraft that’s orbiting a duck-shaped comet 180 million miles from Earth just got its life extended. Instead of ending in December of this year, the Rosetta mission will continue flying around Comet 67P/Churyumov-Gerasimenko until September 2016.

The European Space Agency hasn’t specified why they’re prolonging the mission, but it certainly helps that Rosetta has returned a treasure trove of data, despite its setbacks. (Mission extensions are fairly common; after the initial costs of building and launching a spacecraft, keeping it operating for a few extra months or years has relatively little cost compared to the potential science payoffs.)

Comets are like interplanetary fossils; untouched, they still bear information about the early solar system. To see what we can learn from them, the Rosetta orbiter is tagging along with Comet 67P as it nears its perihelion–the point where the comet’s orbit takes it closest to the Sun–on August 13. The comet is heating up along the way, boiling off lots of ice, dust, and volatile compounds that Rosetta can ‘taste’ from above. With the new extended mission, scientists will have more time to study what the comet is like after the meltdown.

“We’ll be able to monitor the decline in the comet’s activity as we move away from the Sun again, and we’ll have the opportunity to fly closer to the comet to continue collecting more unique data,” said Matt Taylor, ESA’s Rosetta Project Scientist, in a statement. “By comparing detailed ‘before and after’ data, we’ll have a much better understanding of how comets evolve during their lifetimes.”

If Rosetta makes it through the cloud of dust and ice evaporating from the comet, ESA says they plan to bring it in for a closer look at the comet’s nucleus. They may even try some riskier maneuvers, including flying across the night side of the comet to measure plasma, dust, and gas interactions.

Here’s hoping the mission’s longer lifetime will give the team a fighting chance to get the Philae lander back online. After a rough landing in November, Philae was unable to get enough power to its solar panels, resulting in seven months of hibernation. Now the later is awake again, but having problems communicating. If scientists can establish a better connection with the lander, it might be able to resume collecting science data again.

If it’s any consolation, the Rosetta mission may yet get a second landing attempt. In September 2016, when the orbiter is low on fuel and not getting enough sunlight, the scientists will most likely put it down on the comet. Although the press release uses terms like “touchdown” and “set Rosetta down”, others are anticipating a more fiery end. As it hurtles toward the surface, Rosetta may be able to return the amazing images of the surface that Philae has been unable to deliver.