The World’s Most Complete, High-Res Topographic Map Gets an Update

The view from above just grew clearer 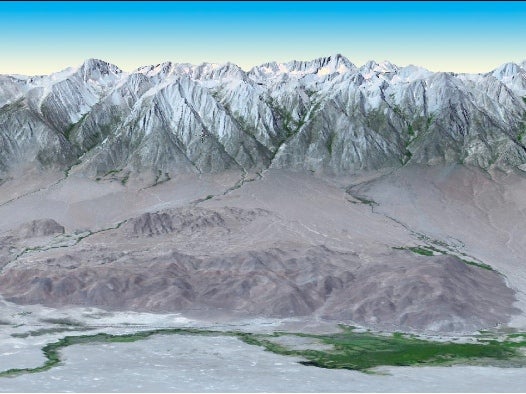 NASA and its partners at Japan’s Ministry of Economy, Trade, and Industry (METI) have released an improved and updated version of the most complete topographical map of Earth ever compiled. Produced from data beamed down from NASA’s Terra spacecraft, the map data represents the most complete and highest-resolution topographical data available today, covering 99 percent of Earth’s landmass.

The global digital elevation model is the product of images collected by the Japanese Advanced Spaceborne Thermal Emission and Reflection Radiometer (ASTER) instrument, which flies aboard Terra. ASTER gathers images in the visible to thermal infrared wavelengths in two dimensions, but by merging two slightly offset 2-D images (known as a stereo-pair) it is able to create the 3-D visual effect that accurately conveys elevation data across the globe.

The original global digital elevation model was released in June of 2009, but the new version adds more than a quarter million new stereo-pairs to the data set, improving spatial resolution and vertical accuracy while expanding coverage (it can now identify lakes with diameters as small as 0.6 miles). It now covers almost all of Earth’s surface, from 83 degrees north latitude to 83 degrees south.

The data can be used by anyone for any number of applications, from engineering and urban planning to environmental studies or mineral exploration. Data users who want the whole model can download it from the USGS. Those who simply want to see what the most accurate digital topographic map looks like can cruise around the Hawaiian island of Oahu in the video below.