Ice On Comet Is As Old As The Solar System 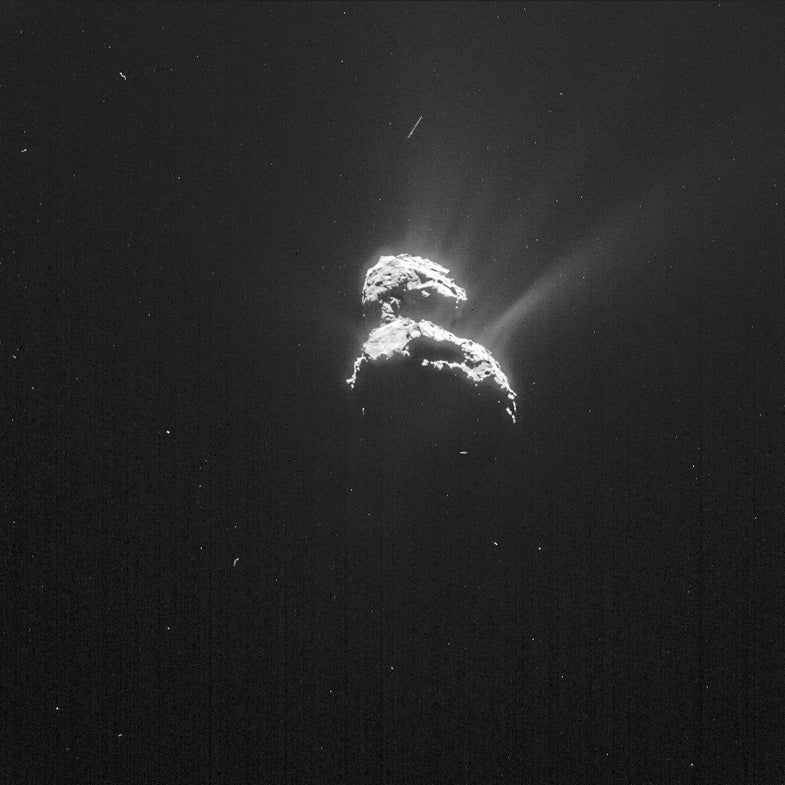 Which came first, the comet or the solar system? At least when it comes to the comet’s ice, the answer is that they both formed around the same time (around 4.6 billion years ago).

In a paper published in The Astrophysical Journal Letters researchers announced that they had discovered that the ice on the surface of comet 67P/Churyumov-Gerasimenko formed at the same time as the solar system itself. The comet is currently being observed by the Rosetta spacecraft

The ice on the comet’s surface is crystalline, meaning the water molecules are arranged in a neat orderly pattern within the ice. This kind of pattern occurs when water is allowed to cool relatively slowly, like in the cooling nebula of an early solar system. The experts believe this ice formed somewhere between -378.4 degrees Fahrenheit and -369.4 degrees Fahrenheit.

The researchers made this discovery not by analyzing the ice on a molecular level, but by looking at the chemicals trapped inside the ice on the comet’s surface. The ice contained only a tiny amount of Argon, a much smaller amount that would be expected if the ice was amorphous, or had a disordered structure of molecules. If the ice was amorphous that might have meant that the comet’s ice formed outside of the solar system, in interstellar space.

The researchers hope that this new information will give other scientists a better understanding of how our solar system formed.

The Rosetta spacecraft will continue operations until September of this year.