This smart doorbell doesn't need to be wired into your house. 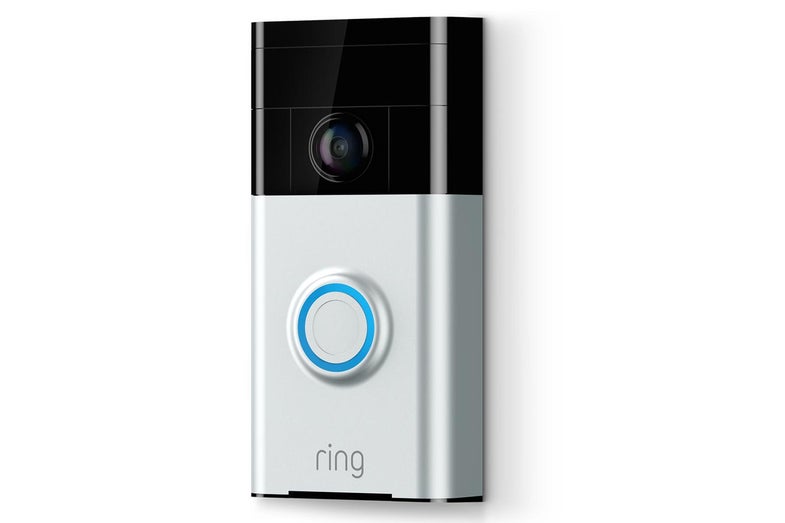 Like most other smart doorbells, Ring lets you see who’s at your door and interact with your guests before letting them in. Unlike its competition, however, Ring doesn’t require dedicated electrical wiring; instead, it can work off of rechargeable battery power.

Since our test home doesn’t have built-in doorbell wiring, we chose the wireless installation option. Unfortunately, despite the freedom it offered, we still didn’t have a lot of placement options for the Ring. That’s partly due to our unique front door situation, and partly due to the Ring’s 5-by-2.4-by-1-inch size, roughly the same as a thicker iPhone 7. The door has a thin, wooden border surrounded by painted shingles. The former was too thin to serve as an adequate base, while the latter were too short to accommodate the Ring’s entire length. We ended up installing the unit directly into a shingle and letting it hang down about a inch over the one below it—not ideal, but not horrible. All told, the Ring took a little over 10 minutes to install, including the mandatory app setup.

Once in place, the Ring can only alert you when someone’s at your door via a notification on your phone. Our review unit came with the Chime Pro, a $49 chime/Wi-Fi range extender that, once plugged into an outlet, boosts the Ring’s network signal and amplifies the sound of the doorbell alerts. It closely mimics the effect of a traditional doorbell. There’s also a $29, non-Wi-Fi extending version called the Chime.

During the three weeks we tested the Ring, the doorbell performed reasonably well in most situations. You receive alerts on your phone (and through the Chime if you have one set up) when someone presses the doorbell or triggers its built-in motion sensors. Once that happens, you can answer the alert on your phone, tablet, or PC through which you can see, hear, and talk to the person at the door.

Unlike some other outdoor Wi-Fi security cameras we’re testing, the Ring never failed to recognize and alert us within seconds of someone walking to the door. In fact, we had the opposite problem.

Within the app, you’re supposed to be able to dial in when the Ring will, well, ring. For instance, you can set up specific zones, disable the motion alerts during paricular days and times, and control how sensitive sensor will be. But, even when we shrunk the zone to within a few feet of the front door (we’re about 50 feet from the road), we continued to receive daily false triggers. Large trucks—usually waste-management or recycling—seemed the be the most-frequent culprits, and we never figured out how to completely fix the problem.

We should mention that the Ring does have a built-in IR sensor that detects body heat, and it does seem to eliminate false alarms from things like shadows and tree branches, which is nice.

As far as video quality is concerned, the 720p image wasn’t all that dazzling to look at, but it’s serviceable for the purposes of a video doorbell. Infrared night vision worked well enough, and two-way talk came through clear on both ends. (The $250 Ring Pro can stream 1080p video, but it requires an existing hardwired doorbell).

Ring says the rechargeable battery will last between six months and a year. We can’t verify that, but we can say that at the time of writing (a little under one month since install), we have 58 percent battery life left. So the company’s estimate may be a little optimistic.

When you buy a Ring, you get a 30-day free trial of backup cloud storage, which gives you access all your triggered Ring events. Once that time period is up, you can choose to pay $3/month (or $30/year) to save six months worth of videos to the cloud. If you don’t, you’ll only get the instant Alerts with live view. That’s a little disappointing considering other video doorbells like the Skybell offer at least a week’s worth of video backup cloud service for free.

And if hanging what is essentially a $200 camera right outside your front door makes you a little nervous (like it did us), Ring does say it will replace any stolen units if you provide them with a police report. The company also claims its proprietary screws will help deter theft.

While it’s nice to have a wireless option in the video doorbell category, the Ring’s bulk, price (including the $3/month cloud storage fee), and the middling video performance make it more of a discretionary buy. For $230—the smallest amount you will pay for a Ring and the Chime—you can buy pretty much any Wi-Fi connected outdoor security cam with all the same basic features (minus the doorbell functionality), better resolution, and in a less purloin-able package.