It costs $200 up front, but most users won't need to pay for a cloud subscription. 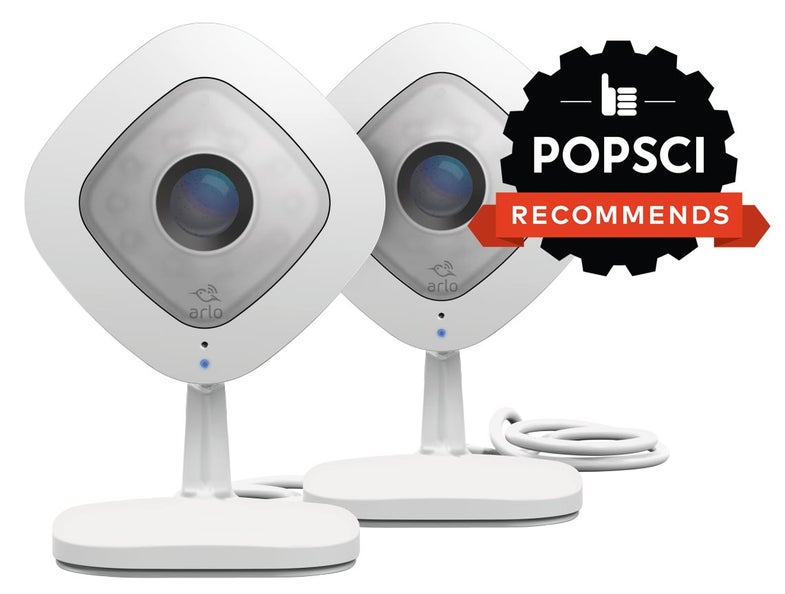 The Arlo Q is an indoor security camera that helps you monitor your home for motion and sound when you’re not around. Like the rest of Netgear’s Arlo suite of security cameras, the Q offers a full seven days of video and audio event backup for free, as well as plenty of custom detection options with its companion app to set it apart from its competition.

Like most in-home security cameras, the Q is simple to setup. After downloading the Arlo app, you choose the Wi-Fi network you want the camera to use and then place a large QR code your phone generates in front of it. A chime sounds to let you know the two have been paired. After that, it’s just a matter of fiddling around in the app to tweak the camera’s audio/video sensitivity and set your own personal alert modes.

You do need to plug the camera into an outlet, but with a cord that measures over eight feet, that shouldn’t limit your placement options much. We set our Q on the same bookshelf we’ve been using to evaluate all indoor connected cameras, one that looks out onto our entire living room.

We recently reviewed the Arlo Pro, Netgear’s outdoor-focused wireless security camera and found reliability issues that seriously hamper its performance. Happily, that trait doesn’t seem to run in the family. The Q was dependable and consistently performed well throughout the two weeks we tested it.

Video and audio quality are fantastic. You get a wide 130-degree, 1080p picture that’s sharp, bright, and lacks the barrel distortion (https://photographylife.com/what-is-distortion/) that is present in some other home security cameras. The camera’s night mode and audio capabilities were equally impressive. Even in pitch darkness, the camera’s ring of 10 infrared LED lights produced clear and legible images of people and text as far away as 10 feet. Similarly, its built-in speaker always excelled at recording clear audio.

Like the other Arlo cameras you control with the app, you get a wide range of modes to choose between, from geofencing, which turns the camera on and off based on whether you’re in your house or not, to regular time-based schedules. You can also tell the camera to detect either motion or sound or both as well as customize its sensitivity to those things.

Most of the dings against the Q have to do less with the camera and more with the Arlo app. We like the fact that you can use your fingerprint to log in on both Android and iOS phones, but there are clearly some issues that still need to be ironed out on Android. Occasionally, the app would spit out “recover token failed” or “account not found” messages and require us to log back in manually with a username and password. Then, after two or three successful fingerprint logins, the same thing would happen again. As was the case with the Arlo Pro, you’ll also see some exceptionally long buffer times (about 30 seconds) when trying to use the camera’s live view. These were ultimately small annoyances though, and they didn’t persist.

At $200, the Arlo Q is in the upper price range of what you can expect to pay for this type of device, but pricing can be deceiving with security cameras. You have to factor in the price other companies charge for even basic video/audio event cloud storage when considering a camera’s overall value.

For instance, a Nest Cam is barely useful as a recording device unless you opt for the $10/month (or $100/year) Nest Aware subscription. That buys you 10 days of continuously recorded video for one camera. It’s also the only way to make use of some of the fancy algorithms the camera uses for face detection and depth sensing. Without a Nest Aware subscription, all you get are snapshot stills of triggered video/audio events from the past 24 hours.

The Arlo Q, on the other hand, comes with seven days of cloud storage for all your triggered video and audio events for free. Those videos are easy to download directly from the app, too, if you want save them on another device. And if you want the option of continuous video recording, you can pay $10/month (or $99/year) for 14 days of it for one camera. The point here is the Arlo Q is actually pretty good deal if you want your security camera to actually function like a security camera.

The Arlo Q is one of the best indoor security cameras we’ve tested so far. It’s reliable, produces sharp, clear images during the day and at night, and it’s free seven-day cloud storage remains one the better values you’ll find.

Range: Adjustable up to 50 feet