The screen, button layout, and even the speakers make this phone better sideways 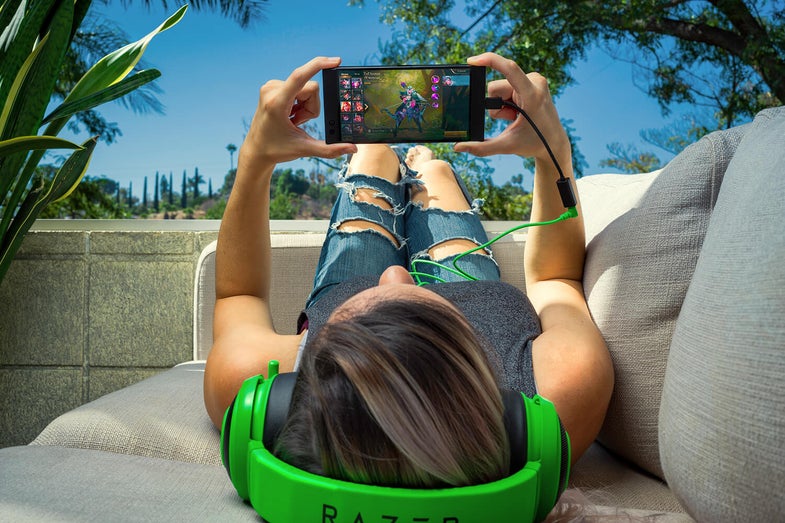 Most of the time you hold your phone, you position it vertically. That makes sense for most apps that require scrolling or swiping, but we do it even when it’s crazy—like when we’re shooting video. Razer, however, designed its first smartphone with horizontal holding as a priority. The sideways orientation is better for gaming, watching content, using augmented reality, and shooting video that isn’t a nightmare to watch, but is it enough to help Razer stand out in the wilderness that is smartphone competition?

If the Razer Phone looks familiar, it’s because it emerged from a device called Nextbit Robin, a smartphone born from a successful Kickstarter campaign in 2015. Razor bought Nextbit at the beginning of 2017 and ported the company into its hardware division, which is also responsible for the company’s Blade line of gaming laptops.

But, despite the familiar design, the Razer Phone employs some specific tweaks to serve its gaming-specific audience. It mounted stereo speakers on the front of the device like on the Google Pixel 2 XL, and that prevents your hands from blocking the sound when held horizontally.

And the volume buttons are now centered on the phone’s case so your fingers won’t accidentally activate them during a game or movie-watching session.

The familiar 16:9 aspect ratio matches movies and TV better than the skinnier (or flatter, depending on how you’re holding it) aspect ratio of the iPhone X (2.17 to 1), or the Samsung Galaxy Note 8 (18.5 to 9). This is a more familiar format for game developers, especially for games that are also available on TVs.

The screen supports a 120 Hz refresh rate, which is one of the most impressive parts of the device as a whole. It’s a Sharp LCD display just like the ones found in the Razer Blade laptops and it smooths out scrolling and animations, but more importantly, enables gaming at higher framerates and full resolution. If you have used a late model iPad Pro, you have experienced the difference 120 Hz actually makes during general usage.

The Razer phone employs a familiar Qualcomm Snapdragon 835 chip and 6GB RAM, which is what you’d expect from a flagship phone. The 4,000 mAh battery, however, is substantially bigger than phones like the IPhone 8 Plus and the Samsung Galaxy S8.

But, despite its “horizontal-first” mindset, Razer made a few odd choices, the biggest of which is the omission of the built-in headphone jack. You do get a 24-bit digital audio converter in the box that plugs into the USB-C charging port, allowing for the use of headphones. This gives you high-end audio performance for a phone, including Dolby Atmos surround sound, but also requires a dongle that messes with your hand when holding the phone. Would it be weird to have the port on the side of the phone? Maybe, but it seems like it would be a lot more efficient for holding the phone.

The phone also isn’t going to get Android 8 any time in 2017, which is a downside, even if the device will be getting content like Final Fantasy IV. You’re stuck with Android 7 Nougat for the time being.

To look at it, the $700 Razer phone (available unlocked, directly from Razer) likely isn’t what many users expected from the company. The aluminum slab body—which also acts as a heatsink to cool the device during heavy processes like gaming—is understated compared to some other Razer products, which come laden with colored lights and geometric shapes.

In 2017, the Razer Phone makes sense as a device for gamers. It eschews tacky add-on controllers like the nightmarish creations of the early 2000s—we’re looking at you, Nokia NGage—and focuses on specs that will maximize performance if competitive mobile gaming catches on like e-Sports have. Razer clearly sees a possible future where mobile games like Tencent’s Arena of Valor can muster millions of spectating fans like the company’s other title, League of Legends. And if more phones take cues from the Razer phone, those fans will shoot horizontal video of the action, instead of vertical, which would be a win for all of us.