With bass for days and surprisingly crisp definition considering its size, the JBL Flip 6 is an outdoor-friendly ultra-portable Bluetooth speaker to beat. 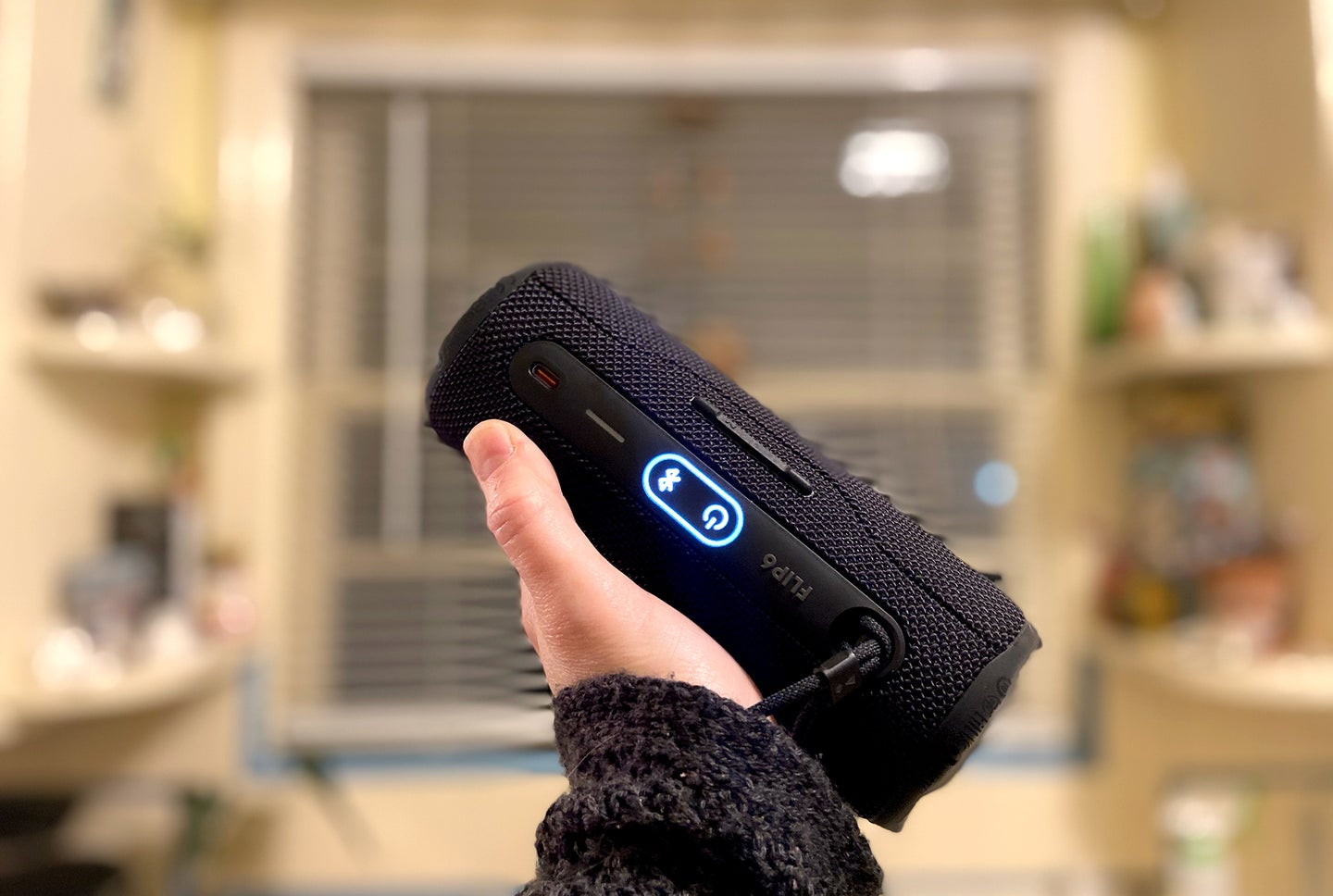 The JBL Flip 6 lets you pump up the volume without upping the speaker’s size. Erin Behan
SHARE

I’ve got JBL’s Flip 5 Bluetooth party speaker in my left hand and the new JBL Flip 6 in my right hand and they’re both blaring indie-rock legends Pixies. From afar it might look like I’m lifting small weights, or at least some pre-workout energy drinks, but the only thing I’m really pumping is agile bass—especially from the right. While these small Bluetooth speakers look like similar cylinders, stuffed burritos if that’s more your thing than tallboy beverages, the Flip 6 is a slightly weightier portable speaker than its predecessor, both physically and sonically. The actual speaker is a touch heavier than the previous model (introduced in 2019), while the lows are a little stronger and the highs a little clearer—even at top volume. Test whether you can distort the sound and you’ll definitely conclude this is one loud speaker. But thanks to several durability upgrades the speaker’s sturdiness goes beyond a sound that doesn’t break up as the beat speeds up. Let’s take a closer look at all the improvements that make the newest JBL Flip 6 a go-to go-anywhere Bluetooth party speaker.

Available in grey, red, black, and blue, with teal coming soon, the Flip 6 immediately announces its intentions with its bold, exclamation point-emblazoned JBL logo (much bigger than the Flip 5’s small badge branding). The compact JBL Flip speaker is a powerful and versatile to-go music buddy, easy to toss in your gym bag for workout tunes, your suitcase for impromptu hotel dance parties, or in a daypack to keep the tunes or the podcast going wherever you go. On a trip and watching a downloaded movie via your phone or laptop? Using the Flip 6, instead of the tinny speakers on your computer or phone, improves the experience immensely. You can listen to it standing up on one end vertically or turn it on its side, depending on your preference, and it’s got an adjustable shoelace-type wrist strap. You can stand the speaker up on either end, or you can lay it down on its side. At 7 inches by 2.6 inches by 2.8 inches (17.8 x 6.8 x 7.2 cm), and a relatively light 1.21 pounds (0.55 kg), the JBL Flip 6 really can go anywhere, and I mean anywhere: bedroom or the beach, shady patio or sunny poolside, beside the kitchen sink or in the shower.

Music lovers who also like to get outside (or anybody with kids and/or pets) will be sold on the best portable speaker that’s waterproof. The JBL Flip 5, which I’ve enjoyed in many places without fail, made (and survived) a splash with its IPX7 rating—a fancy way of saying you can dunk it into water up to about 3-feet deep for up to 30 minutes and expect your speaker to not become a useless paperweight. The newest JBL speaker in the Flip line ups the ante with an IP67 rating. This upgraded rating allows for the same level of submersion; I took it in the shower, dunked it in running water, and threw it in the snow (sadly, no pools open in the PNW in early January) and the JBL Bluetooth speaker carried on flawlessly. Where it improves on the previous wireless speaker is in dustproofing. While I was unable to take the Flip 6 to Burning Man for a definitive test, this dust-resistance upgrade can help prevent a hardware failure in desert conditions and add confidence if you decide to take the speaker to somewhere maybe a little less extreme than Death Valley—the playa, a windy beach, or, heck, the playground sandbox. And while the Flip 6 can survive a dump or sand dune, a small rubber stand helps keep the speaker from rolling off where you’d prefer it.

Setting up the JBL Flip 6

The JBL Flip 6 uses the more robust Bluetooth 5.1 protocol (up from the Flip 5’s 4.2) and I was able to walk with it throughout a 1,500-square-foot, two-story house without ever losing connection. Pairing the speaker with my iPhone 11 (iOS 14.8.1) using the centralized Bluetooth button on the speaker was easy. That button is right next to the on/off one and both illuminate when on. When more than one Flip device is paired together, assuming it works, a light ring around the power button and the Bluetooth button should also illuminate.

On the same panel as the power/Bluetooth buttons is a power indicator light that turns red when time is short and a USB-C charging port, which comes with protection that sets off an alarm if there’s salt, water, or other chemicals in the port that require you to unplug and give the speaker some time to dry out. Speaking of charge, the specs say the speaker’s 4,800 mAh battery gives you 12 hours of sound and I found that to be more or less accurate, depending on the volume I was playing at. It turns itself off after a period of inactivity, essential for people like me who have never remembered to turn off a portable speaker device in their lifetimes. It takes a quick about two-and-a-half hours to reach full charge.

The additional physical controls are equally straightforward. A few inches away—in a line atop the fabric—there’s several raised, rubberized buttons: the infinity-shaped PartyBoost button (we’ll get to that in a bit), two volume buttons (- for lower volume and + for higher volume), plus a triangle-shaped button that allows you to pause and restart whatever you’re listening to. These buttons don’t have backlighting, but they’re simple to navigate.

To connect my JBL Flip 6 to my old Flip 5, I had to download the JBL Portable app (available for iOS and Android). No matter how hard I tried, and I’m a stubborn person, simply pressing the PartyBoost buttons on the two speakers didn’t connect them as promised online. I tried various fixes, like unpairing one speaker from my phone, then the other, then resetting the Bluetooth connection, then pairing one but not the other, but nothing seemed to work. However, since you’re using a connected device to play music anyway, using the app doesn’t seem too big of a burden when pairing speakers.

Note that I found that in order to pair with the app, you need to first pair your device (in this case my phone) with the speakers themselves. Then, when I opened the app, it found both speakers and allowed me to connect them to play together with the touch of a button. JBL says you can connect up to 100 PartyBoost speakers together in mono (an impressive symphony of sound, I’m sure). I was only able to connect two since that’s all I had on hand and would have paired them to create fully defined left and right channels except, because I was connecting a Flip 5 with a Flip 6, the app wouldn’t allow me to, with a note that said, “Please use only two of the same PartyBoost speakers for Stereo mode.”

Even if you don’t want to connect multiple speakers, you might find the JBL Portable app handy as it also allows you to adjust the equalizer setting for bass, midrange, and treble. While it’s not necessary to adjust for every song, you might find that toggling the five steps available for each band is useful, depending on the type of music you’re playing—and the volume you’re crankin’ it up to. If you’re getting down to the chiming exorcism of Concrete Blonde’s “Joey,” you won’t even need to mess with the equalizer. While on a throbbing Kills song, such as the twangy-meets-Timbaland “Doing It to the Death,” you can crank up the bass without any of the bad shakes.

No doubt, what you’d like to know most about the JBL Flip 6—beyond the bountiful specs packed into its diminutive case—is whether this small Bluetooth speaker’s sound makes it worth lugging around. Well, it does. While the Bluetooth only supports a standard-definition codec connection, everything the speaker receives projects with depth. You’d never confuse this speaker for a true two-channel system, but it perfectly reinforces anything I’d want to play from my iPhone or MacBook, allowing me to walk unrestricted around the house while enjoying a connection that performed without a crackle.

JBL brags on its “racetrack-shaped woofer,” the same driver that feeds the low frequencies and midrange of the Flip 5, while a tweeter new to the Flip 6 facilitates the high-frequency end of things. And that booming bass doesn’t get muddy until you really, really turn up the volume, thanks to dual passive radiators (one at each pole of the speaker) that use Harman-tuned digital signal processing to deliver a thumping, distortion-free signature sound rooted in JBL’s long history developing concert speakers. It’s a consistently pleasing roll, even if it never reaches full subbass rumble (something you can’t expect from a speaker this size). For the audio nerds out there, the dynamic frequency response range is 63 Hz – 20k Hz, while the output power is 20 W RMS for woofer and 10 W RMS for tweeter. For the rest of us, you are free to blast Hot Chip or some Sex Pistols to your heart’s content and expect clear sound with impressive bass and low-mids.

The sound quality emanating from the tiny speaker impressed everyone who heard it. And while music—even albums with expansive, oscillating soundscapes like Röyksopp’s 2014 The Inevitable End full-length—performed at a level I’d expect from a larger, more expensive speaker, the biggest win for me was using the JBL portable speaker to play the sound from TV shows and movies I watched on my phone and computer while traveling. For the snappy dialogue, energetic soundtrack, and clarity of the little sound details, the speaker will be joining me in my suitcase on any future adventures I take where I’m expecting some electronic downtime.

In the best waterproof speaker category, the JBL portable Bluetooth speaker delivered, performing well in the shower (I took several and allowed for liberal splashing against my better “Do not get electronics wet” judgment). And I dunked it for 10 minutes in a shallow bath of water and it didn’t suffer any visible ill effects. As mentioned, a brief toss in the snow did no discernable damage.

So, who should buy the JBL Flip 6?

JBL makes some of the best Bluetooth party speakers, delivering powerful sound across price points. As the company’s entry-level model, the JBL Flip 6 is a versatile, imminently portable Bluetooth speaker with a resonant, relatively refined sound for its size and price tag. At $129.95 it’s not the most casual purchase, but if you’re looking for a go-anywhere speaker to get a small dance party started or you want to use it to add dynamics to a movie you’re playing off a phone or laptop, you’re going to be impressed. Those who already own a Flip 5 will appreciate the elevated focus of this iteration and like that PartyBoost can pair them together, even if the connection with an older version won’t allow for stereo mode. Likewise, travelers who are looking for impressive range and reliability get a nice compromise between size and performance in the JBL Flip 6 speaker.

Erin Behan is a writer and editor based in Portland, Ore. For Popular Science, she reviews everyday electronic devices and tests them on her small brood of children (one teen and one grade-schooler) and pets (one very gregarious cat). She writes and edits for a variety of online publications and companies on a range of topics, including real estate investing, sportswear, home insurance, and food. For fun, she likes running in the PNW rain, practicing yoga at home, visiting friends in far-flung locales, and getting out into nature. She recently bought a 100-year-old house, which both terrifies and excites her.