Playing the most popular game in the world on Samsung's new Flagship phone. 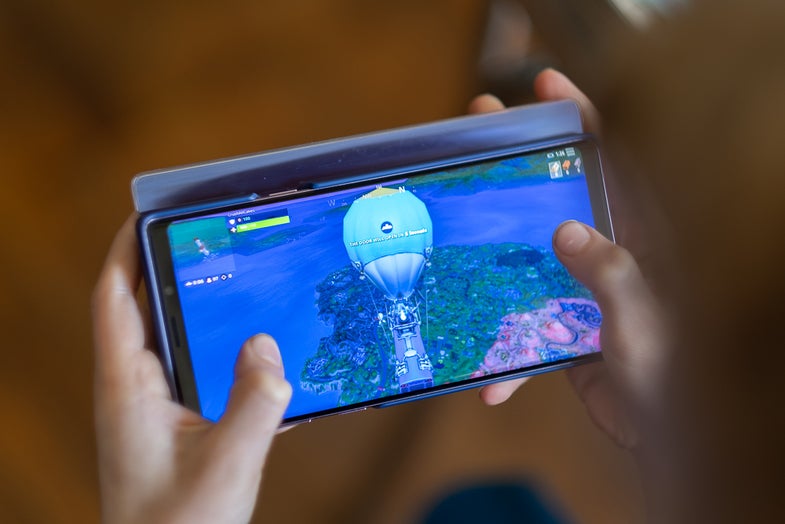 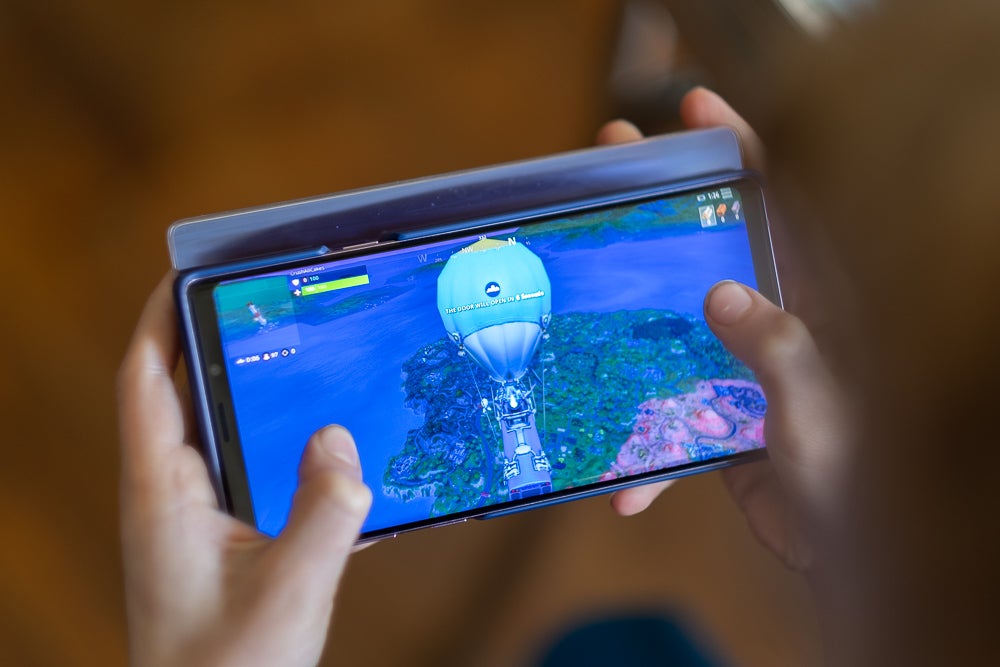 The 6.4-inch screen is wide and ready for some cartoonish violence.

It’s late on Monday night—a school night—and my kids are looking over my shoulder as I hunch over Samsung’s new flagship smartphone, the Galaxy Note9. I’m playing Fortnite, and despite a weekend-long crash course in the world’s most popular video game, I’m still not very good. “Don’t go to Lazy! Everyone will already be there!” my daughter (Fortnite level 32) says, sounding disappointed as she advises me to avoid a specific part of the map. I stubbornly resist her suggestion.

“You died,” my son (Fortnite level 12) says flatly. “The game looks really nice on that screen, though.” He’s right, and that’s largely the point of the new Samsung Note 9. It’s a big phone with cranked specs that debuted along with Fortnite‘s arrival on Android. Checking in over $1,000, it’s pricey, and its massive 6.4-inch screen sometimes feels impractical, but that fits the ethos of gaming hardware. It’s intentionally over-the-top. 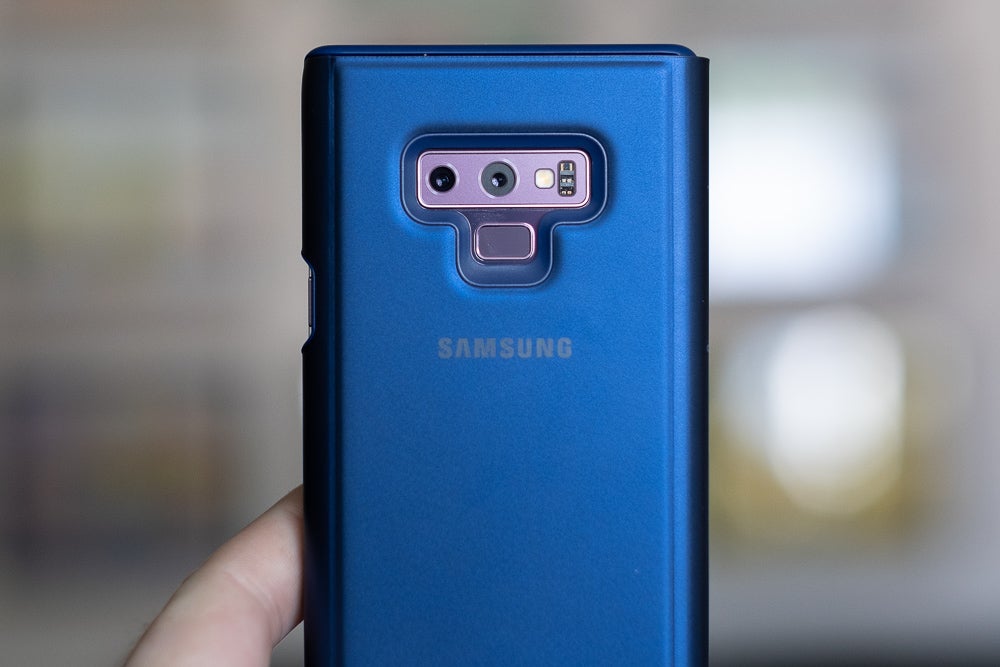 The back of the Galaxy Note 9

You don’t use the back of the phone very much when playing Fortnite, but here it is in a blue case.

If you’re familiar with the Note8, then there aren’t a ton of surprises in its successor. The AMOLED screen moves up to 6.4-inches from 6.3-inches in the Note 8. The Note 9 also uses the newest Snapdragon 845 processor and moves up to a maximum of 512GB of storage, which you can eventually expand up over 1TB with the release of Samsung’s 512GB MicroSD card.

It’s all more than the average person really needs. The storage is enough for tens of thousands of photos and hours of 4K video. The processor can chew through any app you throw at it from the Android ecosystem. Even the new 4,000 mAh battery (up from 3,300 mAh in the Note 8) is way more than enough to last a full day of heavy usage.

But that’s what makes Fortnite such a great companion for the Note 9 in general.

Here’s a quick Fortnite primer in case you’re not totally familiar. The game is a battle royale, in which you take on, or team up with, 99 other people; different games arrange teams differently, so you can play 50 vs. 50 or in smaller squads. In June, the game had over 125 million regular active players across a variety of platforms like the big consoles and iOS, but that was before it was open to Android users. It’s a phenomenon.

It’s also indicative of a relatively new era in smartphone gaming. It’s easy to joke about Candy Crush and other decidedly casual titles, but estimates say that roughly 50 percent of the $138 billion total gaming market will come from mobile revenue. Technically, Fortnite is a “free” game, but it offers literally thousands of dollars in optional add-ons, like outfits, character skins, and those ridiculous dances that dominate every middle school dance. 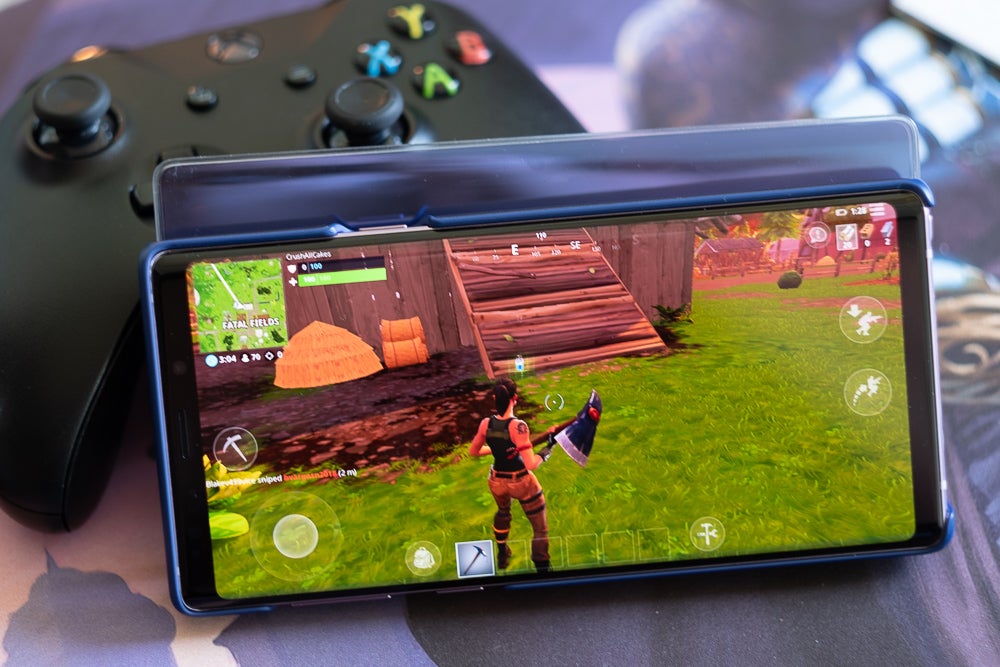 I took this picture after I died and I was waiting for another new game to start. This person stole my items.

The first thing you’ll notice about Fortnite on Android is that it’s not on the Google Play store. You have to download the app directly from its maker, Epic Games. Its massive user base will presumably help encourage users to jump through the extra hoops involved with installing a non-Play-Store app (you have to grant several levels of access to outside developers and have a separate Epic Games account). It feels like setting up a PC game, complete with installing an application whose main job is installing the Fortnite application.

The download itself is big, checking in around 2GB, which is where that extra storage on the Note 9 comes in. Other popular games like Blizzard’s Hearthstone or Player Unknown’s Battlegrounds Mobile also require gigabytes of storage that would eat up a 32GB phone’s space in a hurry..

One the app starts, the colors blast your eyeballs with all the neon accoutrement of a cereal commercial from the late ’90s or a walk through Time Square. The Note 9’s OLED display has measured roughly 27 percent brighter and 32 percent more contrasty than the Note 8. Set the screen to max while sitting in a dark room and it can get bright enough to hurt your eyes a little.

One notable difference, however, between dedicated gaming phones like the Razer Phone or the not-available-in-the-U.S. ROG phone, is that this Samsung device has a typical 60 Hz refresh rate. Other phones have cranked that stat to 90 Hz or 120 Hz to make motion appear smoother on the screen, but motion on the Note 9 feels like a typical smartphone. There are so few high refresh rate phones around that this isn’t a knock against the Note 9, but maybe an indicator of what we’ll see from future Galaxy devices if the focus on gaming remains.

The other notable point about the screen is its lack of a notch at the top that would cut into the display. Even the new version of the Android OS makes room for a notch, but the Note 9 keeps a more traditional shape. The edges of the screen do wrap around to the sides of the phone as part of Samsung’s Infinity Display, but that’s not as distracting as I expected it to be. It did, however, require me to slightly change my finger position while I hold the phone so I didn’t accidentally click on the game menu during Fortnite sessions. 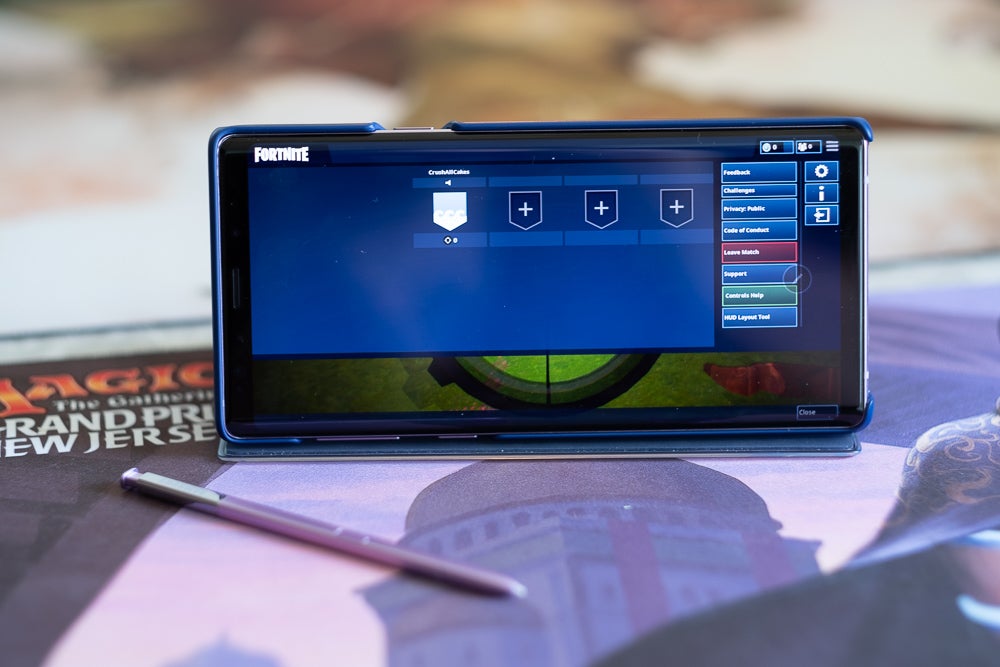 Samsung put considerable work into the S Pen stylus that comes with the phone. While I didn’t use it to play Fortnite, I did enjoy using it to doodle and even play some other games where very fine touches on the screen helped gameplay.

The 4,000 mAh battery lasts a long time, even when it’s doing the intense computing required for high-end gaming. The more interesting element, however, is the water carbon cooling system that uses liquid to keep the phone chill during heavy operations. An AI-powered system keeps tabs on the temperatures and helps cool the processor as needed.

Playing intense games will make your phone hot, which hurts performance and kills battery life. After the Note 7 debacle in which phones literally caught fire, Samsung maximized cooling with a system that’s worthy of a larger device. The phone will get warm if you play long sessions of Fortnite, but it never got hot, like my iPhone sometimes does.

Other gaming bonuses The Note 9 uses Samsung’s gaming mode features in Android to help cure common annoyances that come up with you’re concentrating on a game. You can get to the phone’s menu by swiping from the side of the screen, and you can lock it during a game. Game mode also silences your notifications and prevents other apps from interrupting you while you’re trying to build a fort and some person is trying to snipe you and steal your legendary items.

And if you’re a die-hard Fortnite person, you can get an exclusive skin for playing on the Note 9 on its release day, and Epic will gift you up to 15,000 V bucks (the in-game currency) for pre-ordering. To me, those bonuses mimic one of the worst parts of the current video game landscape in which platform exclusives, pre-orders, and micro transactions stand between gamers and the full experience of a title. But, the fact that they’re so present here is an indicator of just how tied into the complete gaming landscape this title and the hardware really are.

Once Android 9 Pie ships to the Note 9, the improved Bluetooth compatibility will also help if you want to attach accessories, like a keyboard and mouse, to the Note 9 and really take the experience above and beyond.

Should you buy it and play Fortnite on it?

If you’re seriously into mobile gaming, then the Note 9 has a lot going for it. It doesn’t have the fancy, fast-refreshing screen of the Razer phone, but you do get all the other Galaxy features, including the excellent S Pen stylus (which has also gotten some key improvements, but they have nothing to do with Fortnite, so we won’t go into those here).

The bottom line when it comes to considering this phone is how much you really crave overkill. While Apple charges you $1,000 for an iPhone X that’s more sophisticated and refined than its typical iPhone offerings, Samsung is about brute force power and features.

When I asked my kids what they thought about Fortnite on the Note 9, they were genuinely impressed. “This is better than on my Phone [an iPhone 7],” my daughter told me without looking up from the OLED screen. “It’s brighter. Look at my green mohawk. That’s what I always want it to look like.”