How to pick the right wireless charger for your smartphone

It's surprisingly tricky to get the best performance. 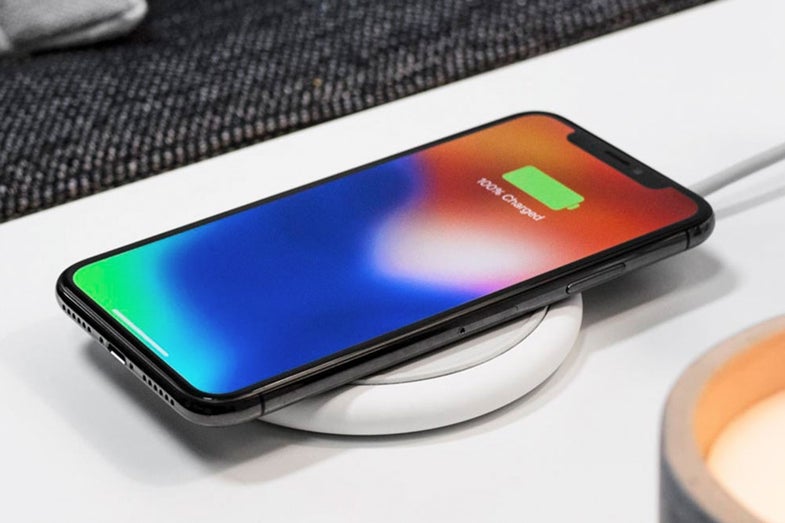 Wireless charging is a wonderfully simple idea. You plop down your smartphone on top of a pad on your nightstand and electricity flows from the grid into your device so you can burn it up the next day scrolling through newsfeeds and watching social media stories. Smartphones have had wireless charging tech inside since 2015 (it was a Blackberry!), but last year, Apple shoved a wireless charging coil into its iPhone X and iPhone 8 devices, which dragged it from the realm of a “hey neat!” feature to a seemingly essential inclusion on the spec sheet of any high-end smartphone.

And while using a wireless charger is simple, picking the correct one can be surprisingly challenging. Variables like design, form factor, and power level can make a huge difference in the efficacy of your new power setup. Here are some of the key things to consider when making the jump to wireless power, as well as some insight into how the tech works in the first place.

The most popular wireless charging technology comes from Qi (pronounced “chee”) and it involves electromagnetic coils in both the charging device and the gadget you want to charge. The power transfers to the device via induction, which will work through some smartphone cases if they’re thin enough and the material doesn’t create interference.

If you want a slightly deeper dive into exactly how the Qi technology works, you can check out the company’s description here.

What’s the deal with Watts?

This is where the shopping process gets a little tricky because the kind of phone you have and its power compatibility can make a profound difference on how fast and efficiently a wireless charger can power up your phone.

For reference, the wired charger that comes packed with the new Google Pixel 3, for example, is an 18-watt charger. Qi wireless charging technology as it currently stands can transfer up to 15 watts of power via wireless induction. Right now, the fastest-charging wireless phones can handle 10 watts, which typically translates to full recharge times in the roughly three-hour range, but that can vary.

Generally speaking, 10 watts is all you’ll need if you want to get the fastest possible wireless charge out of your device. That goes for phones like the Pixel 3 (which is the first Pixel to include wireless charging), the Samsung Galaxy devices, and the LG G7 ThinQ. Meanwhile, iPhones are currently capped at 7.5 watt wireless charging, but buying a future-proof charger is likely a better investment.

If you’re not sure what wattage is correct, it won’t harm your device to overshoot the number. The technology knows how much power is required—at least if you’re buying from a reputable company and dealer. If you buy something too weak, the charge will take much longer.

There are two main types of wireless chargers out there. The first is a pad that lays flat on your table or desk, while the second is a stand that holds the phone at a semi-upright angle so you can see the screen without having to hover your head over the device.

The style you pick depends on your preference, though the location of your charging station will likely guide your decision. I prefer the stand-style chargers most of the time because picking up your phone off the pad stops them from charging and using a device that’s laying flat on a desk is awkward. If you’re clumsy or putting it on a nightstand, however, where you probably won’t be using it much during its juice-up, then a lay flat charger might be a better call since it reduces the chance you’ll knock it onto the floor in a groggy morning haze.

Some companies like Belkin even sell pads you can install into a desk so they sit flush with the surface. It’s like having a special powered zone on your desk that can charge your phone.

Some phone manufacturers make their own wireless chargers. Google makes a charger called the Pixel Stand, while Samsung makes an array of wireless pads. Apple has promised its own wireless charging station using a technology called AirPower, but despite its announcement over a year ago, it still hasn’t materialized.

In short, it typically doesn’t matter what brand you buy as long as it’s a reputable company. You can check out the Wirecutter recommendations here—that team typically does an excellent job sorting through scads of products like this.

Sometimes, however, buying a first-party charger that’s the same brand as your smartphone does offer some benefits. The Pixel Stand, for instance, turns your phone into a makeshift alarm clock and digital photo frame.

Samsung’s duo charger can power up both a smartphone and a 7.5-watt at the same time, which is really handy if you use both every day.

What case can I use with my wireless charger?

Unfortunately, there’s not a hard rule to govern this. Apple and other phone makers specifically make some of their cases so they will work with wireless charging pads. In fact, the new Pixel 3 case is slightly different than the old Pixel 2 case (that phone didn’t have wireless charging) to make sure it was compatible.

Some companies, like Belkin, offer guidelines on their charger product pages to indicate what qualities might prevent a wireless charger case from allowing power to make its way in.

In general, though, thinner is better.

What about portable chargers?

Portable battery packs are essential kit for carrying your gadgets around, and there are wireless options out there, including some rather excellent options from Mophie. Wireless charging is a nice feature if you lose your cable or often forget to bring one (or you want to charge two gadgets at once and only have one cable). But, wireless charging is inefficient and slow, so portable wireless packs aren’t great at providing the quick bursts of charge you often need when you’re on the move.