If you’re looking to improve your Zoom game, this is the webcam you want. 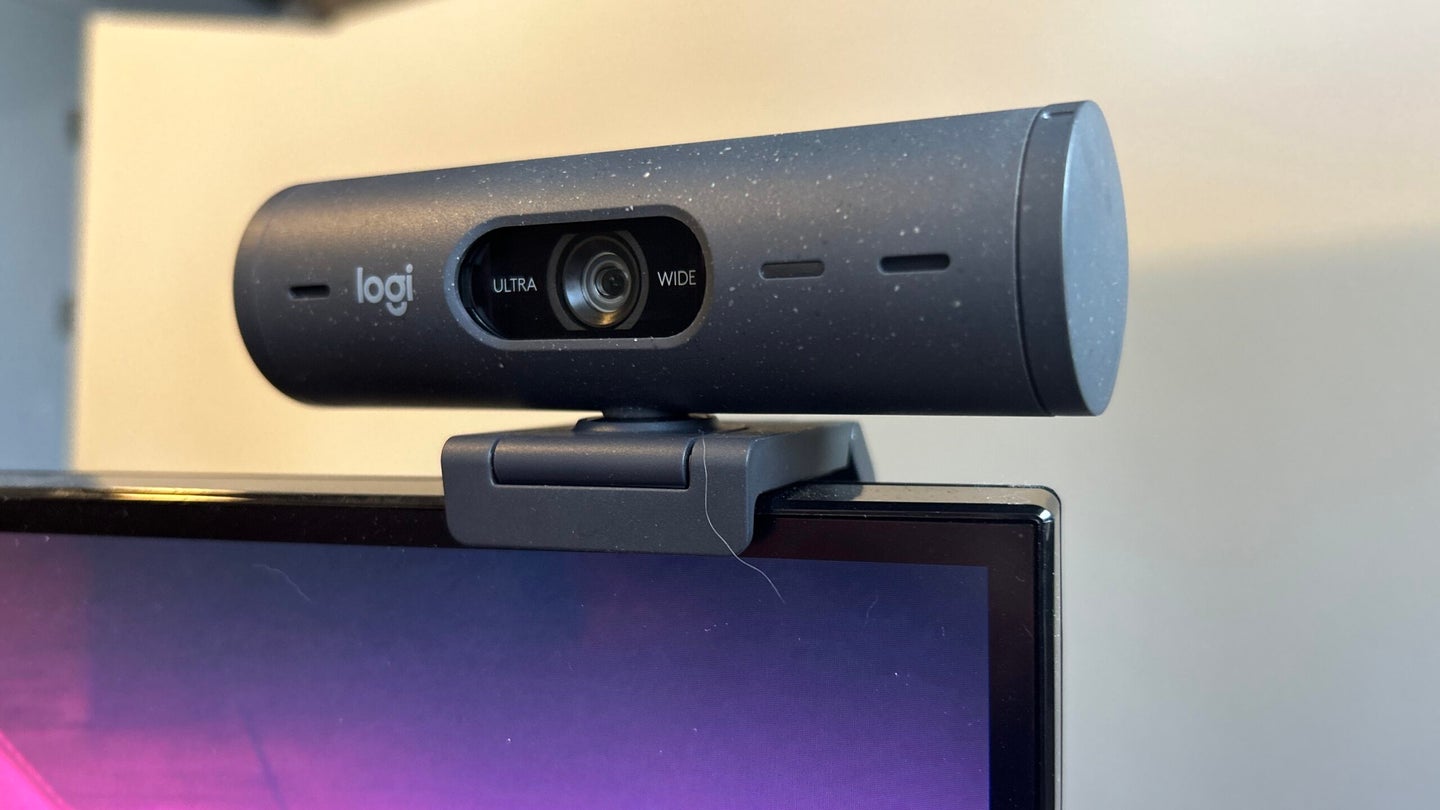 The Logitech Brio 500 has a modern look, and new features to match. Mike Epstein
SHARE

Logitech is the biggest name in consumer webcams and has been for a long time. The company has managed to retain this status throughout the COVID-inspired work-from-home revolution, even without updating many of its most popular webcams. For years, the Logitech c920 series has set the standard for dedicated webcams in terms of image quality, features, and configuration software—until this month, that is, when Logitech released a new 1080p webcam, the Logitech Brio 500.

Building out the “Brio” name that was originally reserved for its specialty 4K webcam, the Brio 500 is a sleek, feature-rich evolution of the Logitech c922 Pro. It offers the same core resolutions and frame rates: 1080p at 30 frames per second or 720p at 60fps. It also adds a host of improvements, including a new ultra-wide lens that allows for a more adjustable field-of-view with deeper zoom, auto-framing, and HDR support. The slick new cylindrical chassis facilitates some technical improvements, including a detachable mount that lets the camera spin 360 degrees. With the older webcams still around and getting a price drop, the more expensive Brio 500 will likely seem like a luxury at a glance. In my mind, though, it sets a new gold standard for workers who care about how they look on camera and want a webcam that makes it easy to get the perfect view for Zoom, Teams, or Hangouts.

What is the Logitech Brio 500?

The Logitech Brio 500 changes up the look of Logitech’s long-standing c920 webcam, which feels like a huge departure after 10 years with that design. The Brio 500 takes on a more aesthetically inclined form: It’s a thin cylinder made of speckled matte plastic, available in three colors–off-white, a dark graphite, and very light rose.

At 4.25 x 1.25 x 1.125 inches detached, or 4.25 x 2 x 2 inches with its mounting bracket, its footprint is slightly larger than the c920 series, because it’s much wider and a little taller but the rounded shape and smaller bracket feel less intrusive. The camera sits inside the chassis, so a rotating privacy shutter inside can cover the camera when you turn a dial on the side. The stereo microphones are now small slits in the housing, rather than a pair of speaker-like dotted panels on either end. All in all, it doesn’t stick out as much, which is saying something for a piece of gear that sits perched on top of a monitor in most setups.

The Brio 500 follows the top-level specs of previous mid-to-high-tier webcams. It can record video or livestream in 1080p at 30fps, or 720p at twice the frames. These core specs are identical to the webcam’s predecessor, the Logitech c922 Pro, but that’s OK. While a bump 1080p/60 would have been appreciated for Twitch streaming and other video projects, these settings offer what most video conferencing platforms can handle—Zoom and Microsoft Teams support up to 1080p/30fps, while Google Meet taps out at 720p/30fps.

The Brio 500 technically does offer a couple of straight-up quality “upgrades” over the c920 series. It’s a 4-megapixel camera, up from 3MP on the c922 Pro, which theoretically improves image quality in photos, though I doubt you’ll notice a difference in most situations. The stereo microphones now feature beamforming technology, which can specifically target the person in front of the camera and reduce the amount of ambient noise coming through. In a self-administered trial, I found that the mic did sound slightly more clear than my c922 Pro.

Widening the field (of view)

The redesigned Brio 500 camera features an ultra-wide lens with a 90-degree field-of-view, so you can capture a very large area, should you want to capture a group of people, or get a whiteboard in the shot. Using Logitech’s webcam configuration software, Logi Tune, you can automatically adjust the lens to shoot in a 65-, 78-, or 90-degree FOV, and adjust the framing using the camera’s 4x digital zoom. It gives you a lot more flexibility to set exactly what is and isn’t in the frame.

That flexibility also enables an AI-based auto-framing feature called RightSight, which digitally pans and zooms within its ultra-wide view to keep your face in the center of the frame, similar to what Apple, Samsung, and Google have added to their respective phones in recent years. (At the time of this review, RightSight is still in “beta” and won’t be available until around “the end of September.”) RightSight’s adjustability is comparable to those features, in that it works well when framing up a static face, but may not be able to keep up with a moving target. If nothing else, it creates a single-button solution for framing up your webcam before a meeting, rather than dialing in it yourself.

The Brio 500 also supports an enhanced version of “LightSight,” a matching feature that automatically optimizes and enhances the lighting of your webcam shot. This feature is available in previous Logitech webcams (and many others), so it may not seem like a big change. The Brio 500’s version of the feature is much better than prior models, however, thanks to high-dynamic range (HDR) support.

HDR, a technology you may have heard of if you’ve checked out any of our TV coverage, allows your camera to pick up and show a wider range of light and shadow than it normally could. In a webcam, rather than a high-end camera or display, HDR is a digital technology that takes the edge off hard lighting conditions. Daylight coming through a window looks less oversaturated and blown out. It’s easier to see details in dimly lit rooms. HDR support is still no substitute for proper lighting but it can do wonders if you’re in a room that could use another lamp.

In addition to all the upgrades going on under the hood, the redesigned camera housing offers a host of functional upgrades, in addition to its new business-casual look. First and foremost, the camera and mounting bracket are actually two separate parts now. The camera’s attached to the mount via a magnetic panel in its base, allowing you to take it off and put it directly on a tripod sans bracket, or just detach it and move it around by hand. That magnetic base panel is round, allowing the camera to turn 360 degrees on the bracket so you have real shot composition options when setting up. These options are hampered somewhat by a skimpy 5-foot USB-C cable, but you still have far more freedom to play around with the position of your webcam than in the past.

The mounting bracket is smaller than versions on the various Logitech c920 webcams and is specifically designed to hold onto monitors with thinner bezels. I’ve been able to comfortably attach it to monitors that I would not have considered webcam friendly with my older model.

The bracket also features a rotating panel directly under the camera, which allows you to point the camera straight down at the desk or table in front of the webcam. Thanks to a Logi Tune feature called “Show Mode,” which automatically flips the camera’s perspective when it’s pointed down, you can very quickly and easily pivot from talking to camera to showing a piece of paper or tablet with handwritten notes on it, and back again. Again, this gives you many more easily achievable shots that can come in handy in video calls. At the very least, you’ll never have to hold a note or a thing you want to people in front of the camera anymore.

So, who should buy the Logitech Brio 500?

The Logitech Brio 500 offers a substantial set of camera upgrades to the standard set by the Logitech c920 series. You might not use or even notice them every day, but you can expect that they’ll improve the video and audio quality of video calls and open the door for a more flexible experience. Even at a higher, $129.99 starting price, this is the best balance of quality and features to price for a webcam you’ll use primarily for video calls at work or with friends.

There’s a wrinkle, of course. For the time being, Logitech’s last-generation webcams, the c920 series, are still available with a substantial price cut. The C922 Pro costs $79.99 (down from $99.99) and the C920s costs $59.99 (down from $69.99). It’s unclear how long Logitech will keep producing and/or selling these cameras but that’s a big difference in price for the camera I would’ve recommended to most people as recently as a few weeks ago. If you don’t care about show mode, HDR support, or how the camera looks, you’re really better off sticking with the older models. Not everyone needs the best webcam, and the older Logitech webcams still get you very close for around half the price. In the short term, the Logitech Brio 500 could be considered a luxury but in time, as the older models fade away, it will likely become the king of webcams.