Google Pixel 2 Review: The phone that made me consider ditching iPhone

The screen, camera, and Google Assistant make a strong case for jumping ship. 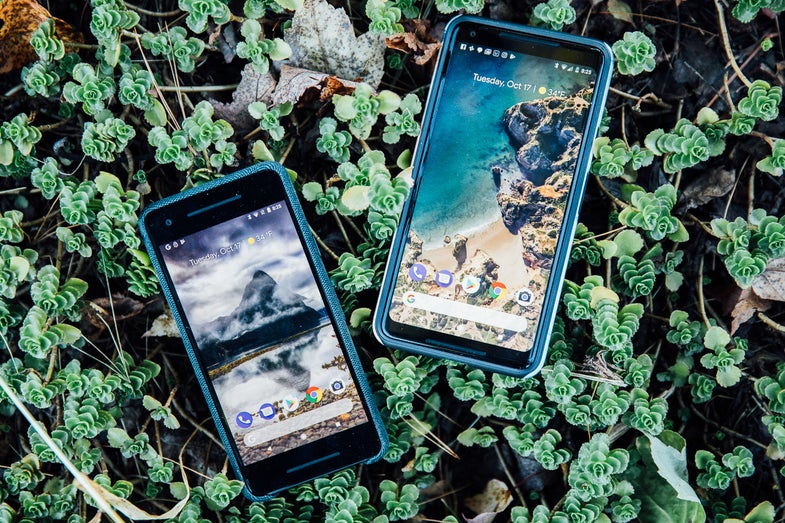 I started using the iPhone as my personal device in the 4S era of 2011. I liked the hardware and the fact that it let me avoid all the tricky Android version and compatibility issues. Since then, I have waited for an Android phone that could sway me to the other side, away from the iOS life I chose for myself many years ago.

I have used some great Android phones along the way, from the original HTC One to the versatile Moto Mods system, but nothing has convinced me. The Pixel 2, however, is as close as any phone has come to making me join the green text bubble crowd. The Pixel 2 and the Pixel 2 XL aren’t the biggest or most powerful phones—and they lack a few features that would certainly be nice—but what’s there congeals together into a very pleasing smartphone package. Here’s a rundown of everything I liked and didn’t like about Google’s new phones, mostly so I can consult my own notes when it’s time to upgrade in a few months.

— Both Pixel phones have identical specs except for the screens, including the latest Qualcomm processors and 4GB RAM each. As usual, those specific numbers are useless to the average human. Long story short, they have plenty of power to run any current app, and it should be that way for a few years.

— Android 8.0 Oreo comes stock on the Pixel 2 phones, and it’s not jammed up with manufacturer-specific nonsense and apps like provider-specific navigation apps and other such flotsam I don’t want. It’s clean and it’s quick. It’s the Android experience I want.

— Both Pixel 2 models use OLED displays, something the iPhone 8 and 8 Plus are lacking—Apple is apparently saving that for the iPhone X. It makes an immediate, noticeable difference with darker blacks and more natural color, and it’s one of the key advantages it has over the iPhones. Samsung, of course, has been using OLED for some time, but I actually prefer to keep some bezel around the screen. I’m a smartphone hipster in that way. I use my fingers to hold my phone, and I like having a place to put them. The Samsung phones also look cartoonishly oversaturated in comparison. [NOTE: Some users have been experiencing issues with the Pixel 2 XL screen, including weird coloring and even burn-in. Google issued an official statement to The Verge about it.]

— The always-on display to show the time and alert icons seems like a throwback at first, but it makes sense on a phone where the built-in Assistant plays such a big role. I also like that it identifies songs it hears playing around you and tells you what they are in real time so you don’t have to race into the Sound Hound app or try to remember lyrics for awkward Googling later.

— The camera was one of the biggest selling points of the original Pixel, and Google has put a ton more work into tuning the camera hardware. The HDR+ tech can overdo it on the colors now and then, but it does a solid job of making the scene you capture look like what you actually saw with your eyeballs.

— Squeezing the edges of the phone to summon the Google Assistant is intuitive and useful. Similarly, tapping the power button twice to summon the camera app is extremely handy, and something I wish iOS would do by default. One of the pet peeves I’ve had with Android is that I knew shortcuts like this existed from talking to seasoned Android users, but I hated digging for them. So I’m glad Google has brought them to the forefront.

— Google Assistant is way more helpful than Siri. Even though Apple and Google have different explicit purposes for their assistants—Siri is a way to navigate your devices, while the Google Assistant acts more like an actual assistant that can perform tasks inside apps or look up information. I find Google’s solution much less frustrating and to have far better integration into the apps I use on the regular.

— Google Lens tech allows you to point your phone at a landmark or an object and learn more about it. It’s an interesting way to leverage all the machine learning smarts baked into the Pixel phones, but it takes a little getting used to and the applications are still limited at this point. Every time I used it, like pointing it at a movie poster to find movie times, it felt cool, but impractical because you can’t be sure whether or not it will actually work like a text or voice search.

— The animated Live backgrounds are nifty. I stopped noticing them after some use, but every once in a while, it would catch my eye and I’d watch the crashing waves of the beach screen saver. Totally unnecessary, but fun.

— The USB-C is more versatile than Apple’s Lightning port because it works with more devices, and I have more faith in it sticking around for the long haul, even if Apple switches connections again down the road.

— The fingerprint reader is in the right spot on the back of the phone. It’s not so close to the camera that you smudge the lens like on the Galaxy, and it hasn’t been completely omitted like on the iPhone X.

— IP67 toughness ratings make it exactly as dust- and waterproof as the iPhone 8, and plenty rugged for regular usage. That comes in handy if a review phone were to, say, accidentally fall into a urinal at a rest stop on the New York State thruway, which could possibly totally happen. (Sorry, Google review coordinators).

— Like the original Pixel, both new versions will store your photos and videos automatically at full-resolution in the cloud for free. That will still cost you if you go with iCloud.

— The black cloth case Google shipped me with the Pixel 2 is one of the most handsome smartphone cases I’ve seen. I also really like the look of the black/white/orange Pixel 2 because it ditches the “cold metal slab” aesthetic.

The positives outweigh the negatives, but the Pixel phones aren’t perfect.

— The Pixel 2 XL has rounded corners on the screen like the iPhone X. It’s not an engineering choice, but a design decision, and I hate it. I thought I would get used to it after a couple days, but I continually noticed it on an otherwise beautiful 6-inch OLED display. The regular Pixel 2’s 5-inch screen has square corners.

—There’s no headphone jack. I don’t take off a lot of points for this omission because it’s likely to be the way of the world going forward. The Galaxy phones and the LG V30 still have the headphone jack if that’s the most important thing for you. Google’s dropped the price of its USB-C headphone dongle to just $9, so you can stay wired if you want. Or just get wireless headphones. I tried several pairs from Jaybird and Bose, and they all worked great.

—Wireless charging isn’t baked in. So if you want to ditch the power cord, you’ll need to get a special case and charging mat (which is, at least in my experience, never worth it).

—The Pixel 2’s 2,700 mAh battery is relatively small compared to the 3,000+ mAh flagship phones out there, but I had no problem getting well over a day of use out of it on a full charge. The Pixel 2 XL doesn’t suffer the small battery problem, as it has a massive 3,520 mAh cell, which coincides with its boogie-board-like form factor.

—No microSD card expansion slot means you’re stuck at 64GB or 128GB depending on which model you buy. This isn’t such a big deal thanks to Google’s policy of storing your photos and videos for free in the cloud.

—The Google Earth themed case that Google shipped me with the Pixel 2 XL is one of the ugliest smartphone cases I’ve ever seen. Full stop.

No, seriously, what phone should I buy? Because they all sound pretty similar.

The differences between all tier one phones, including the Pixel 2, the iPhones, the Galaxy phones, and the LG V30 are razor thin.

If you’re coming from an Android phone, you’ll have to decide if the Samsung’s technical advantages (like expandable storage, bezel-free displays, and the Note 8’s stylus) are worth giving up a better OS experience and a far better digital assistant (sorry, Bixby) in the Pixel 2.

If you’re thinking about jumping off the iPhone train before the X comes down the pipe and turns the familiar platform on its ear, then the decision is tougher than ever. You’re giving up wireless charging and a dual-camera (in the iPhone 8 Plus), but you’re getting a superior OLED display and a much smarter digital assistant in return (sorry, Siri).

While each one has strengths and weaknesses, you can totally pick up any one of them and live your digital life in pretty much the exact same way. When I upgrade my personal phone in a couple months, I’ll probably still go iPhone 8 Plus, because the Pixel 2 XL isn’t quite enough of an improvement to justify the effort of switching (and seriously, what’s with the round screen corners!?). But it’s closer than it ever has been. It’s not until I used a Google device with tight platform integration that I realized I use a lot more Google services than Apple ones. My text bubbles may turn green sooner than anticipated.