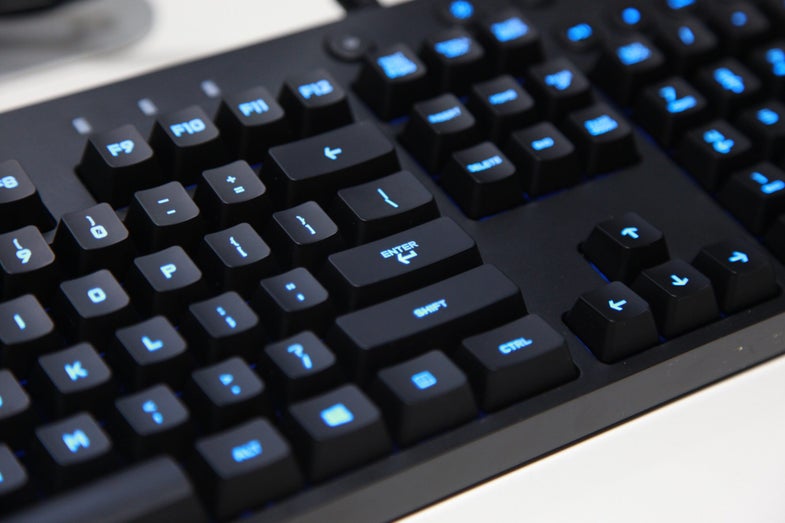 Each key can display up to 16.8 million colors. The LEDs under the keys are focused by a lens to reduce light leakage. Dave Gershgorn/ Popular Science
SHARE

In the past few years, keyboard makers have used sharp, angular designs that match the fantastical aesthetic seen in modern gaming to pitch their gaming keyboards at “stereotypical gamers.”

Now, Logitech is trying something a little different. Their new keyboard, the G810 Orion Spectrum, is a mechanical keyboard for the professional who also games. Or the gamer who’s also a professional.

The G810 is interesting because it’s a synthesis and refinement of a lot of trends in the gaming world. As gaming, including playing competitive games like League of Legends, Dota 2, and Heroes of the Storm, becomes more mainstream, companies making peripherals are adapting to a market that want more serious products. The G810 is just that: a harbinger of more refined gaming products. Logitech is also claiming that their keyboard actuates 25 percent faster than the competition, making it ideal for gamers as well as those who just want a great typing experience.

The keyboard is a matte black plastic with black keycaps, and each of the 99 (by my count) switches (plus 7 media/function keys) are configurable for key mapping and RGB lighting. The entire case is perfectly rectangular with rounded corners, a departure from Logitech’s previous model that screamed “gaming keyboard.” Each key can be lit up to 16.8 million colors, and under each keycap is a lens that focuses the light from the LEDs, which greatly reduces light leakage between keys. With Logitech’s software, the lights can be adaptive to typing (the lights change based on the keys you press), or responsive to the game you’re playing (when you’re being flagged down by the police in Grand Theft Auto V, the keyboard flashes red, white, and blue).

Under each key lies Logitech’s proprietary switch (the mechanism for actuating the key), called the Romer-G. Logitech says that the closest comparison to Cherry MX switches, which are widely used by other keyboard manufacturers, would be the Cherry MX Brown, which provide a light “bump” when the key is pressed. They’re rated for more than 70 million keystrokes, so feel free to clack away.

In use, the switches have a little more resistance than my Cherry MX Reds at home (on the Corsair K65 RGB), but each keystroke is a little more satisfying. Logitech has also included a roll bar in the top right corner of the keyboard, above the 10-key pad and media buttons, which is ultimately satisfying. Unlike the rest of the keyboard, the roll bar isn’t mappable. Also, Logitech’s software, which is used for mapping keys, changing colors, and more, is not available for Mac OS X (yet). While I’ve used the keyboard with a PC, most of my usage has been on a Mac, and I couldn’t take advantage of a lot of the extra features, even though it feels great to type on.

Logitech’s G-keys, which were extra customizable keys mainly used for gaming, are also absent from the G810. As a whole, the keyboard is gorgeous, designed to be sleek and unassuming.

Until you turn on the disco lights.

The G810 is available later this month and will cost $159, and will be bundled with a copy of Tom Clancy’s: The Division.