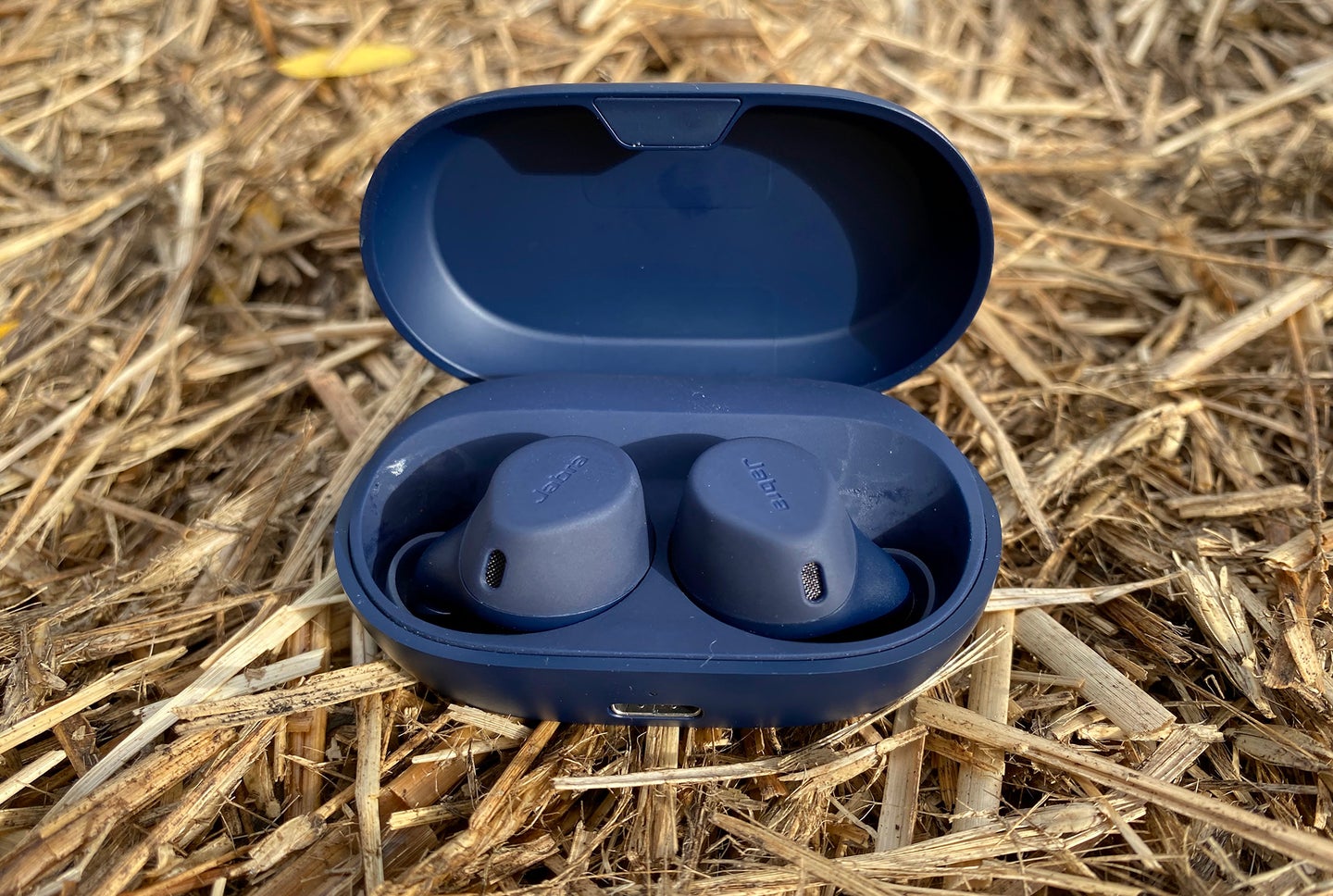 When I agreed to test the Jabra Elite 7 Active earbuds, I decided two tracks were absolute must-listens: Taylor Swift’s “Shake It Off” and Florence + the Machine’s “Shake It Out.” As soon as I learned that Jabra boasts that its “ShakeGrip” technology will make sure these wireless sports earbuds won’t budge, no matter what, I knew what I had to do. So, with the energizing boost of Tay Tay and Flo propelling me to test this selling point, I jogged, jumped, and tried just about everything to jostle the ’buds out of position. Despite my best efforts, however, they held firm, proving that Jabra’s claim was not fake, fake, fake, fake, fake no matter how I would shake, shake, shake, shake, shake.

What are the Jabra Elite 7 Active earbuds?

The comfortable, secure fit alone is enough to qualify a pair of the Elite 7 Active as some of the best true wireless earbuds for working out. But when you add in features like active noise control (ANC) and customizable sound that pumps out of powerful 6mm drivers, you’ve got an excellent pair of sports earbuds that can keep pace when your heart is really pumping. Selling for $179 and available in mint, navy blue, or black, the newly released Jabra Elite 7 Active ’buds are quality sports earbuds made for people on the move. This model is a follow-up to the Jabra Elite Active 75t, which was released in February 2020. The newer Jabra wireless earbuds offer the same IP57 waterproof rating (submersible in up to 3 feet of water for 30 minutes), plus a few upgrades. The big improvement is a sleeker design that is 16-percent smaller, with more discreet SAATI Acoustex mesh-covered microphones notched into the sides of the ’buds rather than dominating the outer edge.

The new Jabra Elite 7 Active buds also offer re-engineered EarGels made of a composite silicone that the company bills as ShakeGrip, which is advertised as allowing the ’buds to stay in place without wings, hooks, or fins. Other upgrades include longer battery life, with the Jabra Elite 7 Active offering 8 hours of playtime in the ’buds, with the case—an oval that measures roughly 2.5 inches long, 1.25 inches deep, and 1 inch tall and charges via included USB-C cable or Qi wireless—boosting that total to 30 hours. By comparison, the Elie Active 75t offers 5.5 hours of life in the buds with a boost to one day of playtime via the case. The new Jabra earbuds also improve fast-charging, with 5 minutes of plug-in time affording an hour of playtime, compared to the Jabra Elite Active 75t buds’ 15 minutes of plug-in time yielding an hour of battery life.

Fit comes first with these sports earbuds. Active is in the name, after all, and they feature an especially long and slim earpiece, with three silicone gel size options included to help the ’buds anchor themselves securely in your ear canal. In my case, the body of the earbud tucked almost entirely behind my tragus (the triangular patch of flesh that sticks out over the ear canal). The minimal protrusion came, in part, because the body is also efficiently designed.

The plastic casing of each ’bud, which is edged with a layer of silicone, packs in a 6mm driver, two microphones, and a clickable button that lets you perform functions like switching tracks and changing to ANC, while only weighing 5.5 grams. That’s notably light when you compare it to the high-performing Jaybird Vista 2 (another one of my favorites), which weigh 6.7 grams per ’bud with the medium ear fin (5.4 grams without it) and the JBL Live Free NC + TWS, which weigh 6.8 gram per ’bud. For me, the Jabra earbuds’ fit was incredibly comfortable—I could barely feel them during hour-long workouts and I only became slightly aware of them when I wore the headset for several hours while working at my desk.

Setting up the Jabra Elite 7 Active earbuds was actually—thankfully—a passive process. Once out of their case, the ’buds instantly synced to each other and I paired them to my phone by clicking their name in the list of available Bluetooth connections (the BT 5.2 protocol codecs supported include both SBC and AAC for maximum iOS and Android compatibility). And, thanks to a late January 2022 firmware update, the Jabra Elite 7 Active supports multipoint pairing, meaning you can be connected to, say, your laptop and phone at the same time so you don’t have to fuss with untethering from one and messing with settings in the other if you decide to email one last quick attachment before a run around the neighborhood. Similarly, you could have the earbuds paired with, say, both your phone and a connected smartwatch and use whatever device was most convenient to answer a call if someone tried to get a hold of you during a workout.

Setting up your customized listening experience requires more time and effort, but it’s worthwhile. Start by downloading the Jabra Sound+ app (available for iOs and Android, and necessary for firmware updates if you want that multipoint feature and anything new that rolls out). From there you can personalize your ANC/ambient awareness levels by moving two sliders that can dial the levels of these noise-cancelling earbuds up and down. In the settings tab, you can personalize your experience even more with functions that include MyFit, an automatic check to make sure your buds are correctly in place, and options for adjusting the controls in each earbud. You can assign different functions to one, two, or three clicks (only light pressure required) on either the right or left side, and functions supported range from pausing the music to advancing tracks to switching sound modes (between HearThrough and ANC). However, there is no option to adjust the volume with the ’buds—a definite low point. But what the physical controls can do is very user-friendly.

From the sounds you hear to the noises you don’t, the Jabra Elite 7 Active earbuds have a lot to offer. Here are the noteworthy features:

Equipped with two mics apiece, the Jabra Elite Active buds will effectively cancel out noises around you and even customize your noise cancelling—as mentioned above. The noise cancelling successfully muted my wife’s Zoom calls, the barking dog, and my nearly 4-year-old daughter’s “Rainbow Rangers” cartoon. I actually found the noise cancelling more effective than that of the Skullcandy Hesh ANC over-the-ear headphones that I’ve enjoyed. The Jabra Sound+ app also comes with preloaded Soundscapes that let you pleasantly drown out your environment with natural sounds and white noises. I thought the rain and clapping thunder in “Perfect Storm” and the crashing surf in “Ocean Waves” were particularly pleasing and effective—as well as true to life.

In addition to muting the world, the Jabra true wireless earbuds are also equipped to amplify it. Jabra’s version of ambient/transparency mode—mixing in some external sound with the music for situational awareness—is called HearThrough and it skews more muted than other ’buds I’ve tested, in part because the seal of the EarGels is so secure. This was perfect when all I needed was to hear a car coming up behind me on a bike ride, but it was a nuisance when I tried using the HearThrough mode to talk to my wife. In those instances, I found it better to simply pause the music or take one out (there is a mono mode supported, so you can use either ’bud independently).

Four microphones (two on each bud) make the ANC and HearThrough features work, as well as make these Jabra Bluetooth earbuds great for calls. A special mesh over the microphones guards against wind noise; I used them on several outdoor phone calls and one Zoom meeting that I took on my back deck and I had no issues. I set up my Jabra headphones so that three clicks on the left bud connected me to Siri (Amazon Alexa and Google Assistant are also natively supported on Android devices) and the virtual assistant had no more hearing trouble than usual, passing my test of successfully naming the 15th president (James Buchanan, for those who don’t feel like asking their own phones).

The overall sound quality in the Jabra Elite 7 Active buds is very impressive. The 6mm drivers—which are the same size as other sports buds, such as the Jaybird Vista 2, which I’ve taken for quite a few runs—offer rich, detailed playback across the entire 20Hz to 20kHz spectrum. This was apparent in the noticeable touches like the ring of the tambourine in “Shake It Out” and the chuckles in “Shake It Off.” Meanwhile, the buds strut their stuff at both ends—from the rhythmic drums and bass in “Shake It Off” to the soaring treble in the chorus of “Shake It Out.” Nothing I threw at them could shake their confidence.

While the stock tuning of the Elite 7 Active has the kind of authority you need to keep your intensity high during a workout, customization could very well motivate a lot of customers to buy these Jabra headphones. I’ve already mentioned the ANC customization, but that’s just the start. The Jabra Sound+ app comes with six preloaded EQ mixes: neutral, speech, bass boost, treble boost, smooth, and energize. These mixes adjust the bass and treble accordingly. For instance, “smooth” stays fairly level, with slight elevations in the bass and treble, while energize pumps up the bottom and top ends, dipping the middle range slightly, to bring out the beats and catchy choruses that motivate workouts. You can also create and save your own mixes, known as MySound, by sliding dots on a line chart.

So, who should buy the Jabra Elite 7 Active earbuds?

Active listeners should definitely consider buying the Jabra Elite 7 Active earbuds. The earbuds’ slim, lightweight design and special silicone EarGels create a fit that is more secure and more comfortable than any pair of sports earbuds I’ve tested. To my mind, that fit and the increased battery life make the extra $30 you need to spend to upgrade from last year’s Jabra Elite Active 75t worthwhile.

The sound customization and sound quality will also more than suffice the needs of most listeners. But if you’re as much a sonic critic as you are a workout fanatic, a pair like the Jaybird Vista 2 offers even greater sound customization, while the JBL Live Free NC + TWS, which I’ve found energizing, offer a slightly more immersive sound (for many listeners, the differences will go unnoticed). If you’re looking for a solid pair of sports earbuds on a budget, the Skullcandy Dime, which I found to be a top budget buy, are unapologetically cheap, delivering an incredibly punchy sound that outperforms its price point. But these budget ’buds come back to Earth with an IPX4 rating that can’t handle workouts that get too sweaty. They also don’t offer any sound customization.

If you need a set of earbuds for work more than play, the Jabra Elite 7 Pro, the Active’s more expensive cousin, provides the same great sound, plus added technology that makes for clearer phone calls, such as bone conduction sensors. Similarly, if your lifestyle is a little less sweaty and your budget a bit bigger, there are productivity partners such as the Sony WF-1000XM4, a reviewer favorite and the noise cancellation champ. Still, if you’re more into crunches than just crunching numbers, I don’t think there is a set of buds that will stay in place quite like the personalizable and powerful Elite 7 Active.