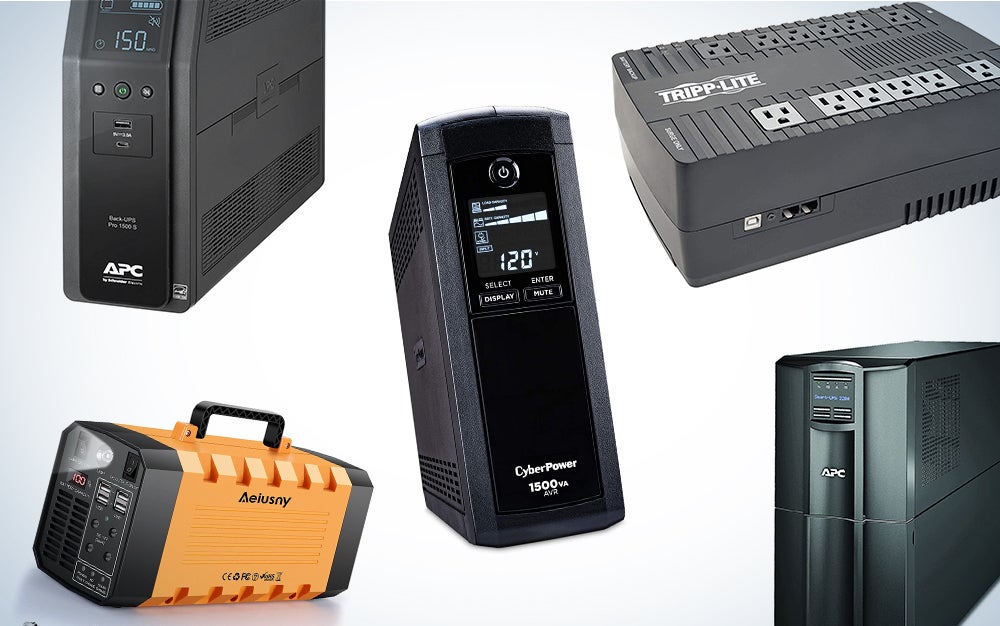 A reliable battery backup protects your electronics in more ways than one.

Losing power is never fun, but it can also seriously mess with your electronics. Computers, external hard drives, home Wi-Fi networks, and more all feel the negative effects of an outage. So, it’s important to create a plan of action to keep your home or your business, or both, running during these possible future blackouts. One important part of your plan should be to consider the best battery backups (uninterruptible power supply, or UPS), which will automatically take over when the power drops or goes out entirely.

But there’s no one solution that’s perfect for everyone. Some might need a more powerful and versatile solution—particularly if you’re looking to back up the equipment in your business. Or maybe you have computers and laptops that are particularly sensitive. And you’ll find that UPS models have a broad price range—you can buy one for under $100 or spend thousands of dollars.

To help you narrow those choices, we’ve put together a list of the best 5 UPS models currently available.

Even if you’re not prone to power outages, many UPS models also include surge protection features. An automatic voltage regulator smoothes over brownouts and spikes without needing to change your battery. It’s one of a number of capabilities you’ll want to look for in a UPS.

How we selected the best battery backups

For the majority of the UPS models in this guide, we focused on the home user, which is why we selected units that were less than $300. However, for one, Best UPS for business, we selected a more expensive model, since most small business owners are likely to pay more for a more robust UPS that can handle more machines.

Next, we prioritized UPS options that output as a clean sine waveform, instead of a simulated sine waveform: This feature is important for more sensitive computers, like gaming systems, and audio equipment.
We also considered a number of other features that we considered important—for instance, we looked for UPS models that included surge protection features, like line interactive topology, which uses an automatic voltage regulator to normalize any dips or spikes in power in active (or non-battery backup) mode. We also considered other features: How many outputs did the UPS have? How many outlets were both battery-and-surge-protected outlets? How many outlets had only surge protection? Plus, we considered USB ports, the length of the power cord. These details can sound pedantic, but they can make a huge difference in day-to-day use.

What to consider when buying the best battery backups

If you’re looking to buy a UPS, you’ll find that there’s a rather large range in prices—from less than $100 to more than one thousand dollars. So, how do you choose? Use the following guide to help you make your decision. Here are some factors to consider before making your purchase:

When you’re looking to buy an uninterruptible power supply, or UPS, which is a device that will not only provide power to various devices, like a laptop or wireless router, but it also serves as a surge protector. Depending on how powerful your UPS is, you can have it provide battery backup power to many different devices. However, you’ll need to make sure that your supply has enough output power for the job. In general, the best battery backups can output at least 400W.

UPS models include a number of different features, but you’ll want to focus on a couple, depending on what you want to back up. A sine-wave inverter allows a UPS to produce a clean sine waveform, which is the best type for power output. In contrast, some inexpensive models output a simulated sine waveform, which can be problematic for some higher-end gaming laptops and audio gear. Another key feature is to look for line interactive topology, which in some UPS models, use an automatic voltage regulator to compensate for small dips and spikes in the active power coming into your house. So, this feature acts as surge protection for your computers and system.

A unit’s longevity depends on how powerful your UPS is, as well as how it’s configured. For budget or low-end UPS models, you’ll only be able to power devices that aren’t as powerful. Also, lower-end UPS models won’t let you run your computers and other gear as long. (This is called “run-time” and some manufacturers include this information on the product sections of their websites.) Be sure to research how much power you’ll need to run your devices in case of a blackout.

There are some types of products that you won’t be able to run—such as a refrigerator or microwave, which would be too taxing on the UPS. Also, there are some smaller products that just draw too much power. Hairdryers fit that description.

It’s also important to remember that a UPS isn’t meant to take the place of a home generator, which has a more robust power capacity. But for many consumer electronic devices, even monitors and power PCs, a UPS should give you the ability to run them, at least for a short amount of time. (Again, be sure to study the features and specs of the USP models you’d like to purchase to see if they will back up your system effectively.)

Why it made the cut: This strikes the best balance of features, power, outlets, and price for most people.

This mini-tower UPS from CyberPower provides quite a bit of power (900 Watts), which can power a variety of devices—such as desktop computers, workstations, networking devices, and home entertainment equipment. It has a multifunction LCD, and also includes line interactive technology, which uses an automatic voltage regulator to monitor and adjust for dips and spikes in power. Despite all of its muscle, it still runs quietly.

The UPS comes with 12 outlets—six that have booth battery backup and surge protection, and six outlets that only have surge protection. It has an 8-hour recharge time and also includes ports for your phones and network. But its output has a simulated sinewave waveform, which may be a problem with more sensitive computers and tech gear. Be sure to check the specs on your devices to make sure they’re combative with this UPS.

The CyberPower CP1500AVRLCD Intelligent LCD UPS also comes with the company’s Powerpanel personal-editing software, which allows you to remotely monitor the UPS unit.

Why it made the cut:  A very small investment provides solid backup to protect your pricier devices.

If you’re on a tight budget, you might be tempted to skip on buying a UPS for your gear. However, that would leave you vulnerable to power outages. Instead of foregoing a UPS, consider a budget-priced model, like this one from Tripp. The Tripp Lite AVR750U 750VA UPS can generate 450 watts, and has 12 outlets—6 battery & surge protected and 6 surge protected only.

It also provides you with line interactive topology, with automatic voltage regulator—for regulating dips and spikes in your active system without needing to switch to battery power. According to the specs, the line-interactive battery backup can correct for “brownouts and over voltages from 83V to 147V.”

At this price, though, it should be a surprise that it uses a simulated sine waveform (in backup mode) and may not perform adequately with sensitive gear. However, it does include a USB port, has TEL/DSL protection and it can mount to the wall.

Why it made the cut: It’s one of the most portable UPS, which also comes with a pure sine wave form.

This versatile, large-capacity UPS weighs just 7 pounds, which means it’s very portable. It has a 500W output, which according to the company’s specs, allows for the following approximate backup times: 3 hours running a PC and Display, 5 hours for a 32-inch LCD HDTV, and 8 hours for a 13-inch laptop.

Another nice aspect to this UPS is that it gives you four ways to recharge it. It will take 7-8 hours to charge the UPS via an AC wall socket or 12V car outlet. If you use a generator, it will take 8-10 hours and if you have the Aeiusny solar panel (which is sold separately) it will take about 12-15 hours to recharge. It also comes with a six-foot cord. Additionally, the Aeiusny has 3 AC outlets, 4 DC ports and 4 USB ports.

Why it made the cut: Although it’s a bit pricey, this APC UPS offers a lot of power and clean sine wave output for even sensitive computers and devices.

One reason this model makes for an excellent UPS for your home network is that it gives output power in a pure sine wave form. That means sensitive equipment, like networking equipment or high-end audio gear,  will work just fine, since output power is clean. It also offers additional connections and ports: 1Gb and coax protection and includes two USB ports—one type A and one type C. So, it’s easy to have a battery backup for the most important components in your network.

It also will regulate your system when it’s not functioning in battery back up, since it has line interactive topology, with automatic voltage regulator. Another nice touch is that they’ve angled the LCD, so it’s easier to view the UPS status. And it comes with a six-foot power cord and power-management software for Windows PC (Mac OS uses native ‘Energy Saver’ in settings).

Why it made the cut: This APC UPS is expensive, but ample power and advanced features make it attractive for business users.

One feature that stands out on the APC 2200VA is that it has APC’s SmartConnect technology, which allows your UPS to be cloud-enabled. According to the company, that means you can login via a “secure portal (via any internet-connected device).” Then “you can view the status of your UPS, receive notifications, get firmware updates and more.” So for those who might not have time to monitor or the money to have any IT department monitor the UPS, this can be quite valuable.

It also has a lot of power, for hooking up many devices, including your network, into the system. You get ten outlets, eight of which are both power-backed and surge-protected. The UPS also has both line interactive topology (via an automatic voltage regulator) and uses a clean pure sine wave form for output, which makes it compatible with most any computer or audio gear.

Q: What is a UPS for a computer?

A UPS stands for an “uninterruptible power supply” and is essentially a battery back for your computer or other devices and network should you lose power. If the power dies, a quality UPS will kick in automatically.

Most UPS models offer line interactive topology via an automatic voltage regulator to compensate for small dips and spikes in the active power coming into your house. Even if a model does offer it, however, it may not provide it to every outlet, so make sure to check the listing or the manual before you plug in.

Q: How long can I run my computer or devices on a UPS?

It depends on the system, computer and your UPS: If you’re only using a computer, you might be able to run it for 45 minutes. But if you add a monitor and an external hard drive to that, your UPS might only last for 10 minutes. Some of the UPS manufacturers include some runtime figures that might be useful to get an idea of how much time you have to run your devices.

Today, many of us are not only buying more computer gear and mobile devices for our homes, but many of us are also working more from home in hybrid-work situations. That’s why it’s more important than ever that you have a backup plan for your computers and other electronic devices. And that plan should include seeking out the best battery backups.