Is Amazon’s Dome Headquarters The Workspace Of The Future?

Trees and sunshine for better productivity 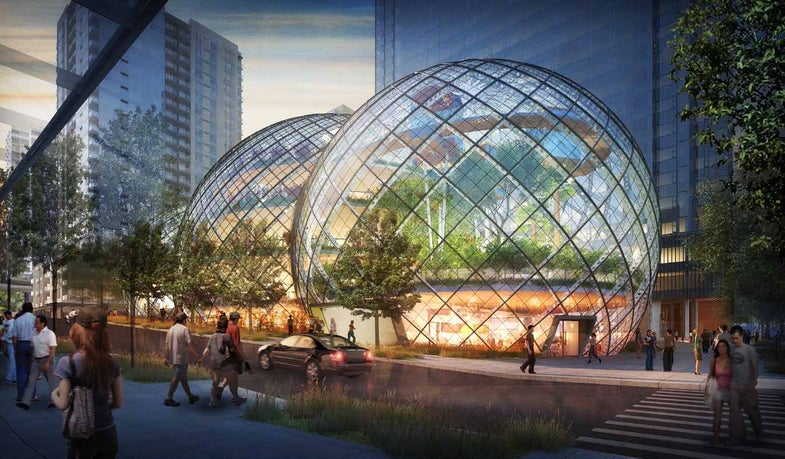 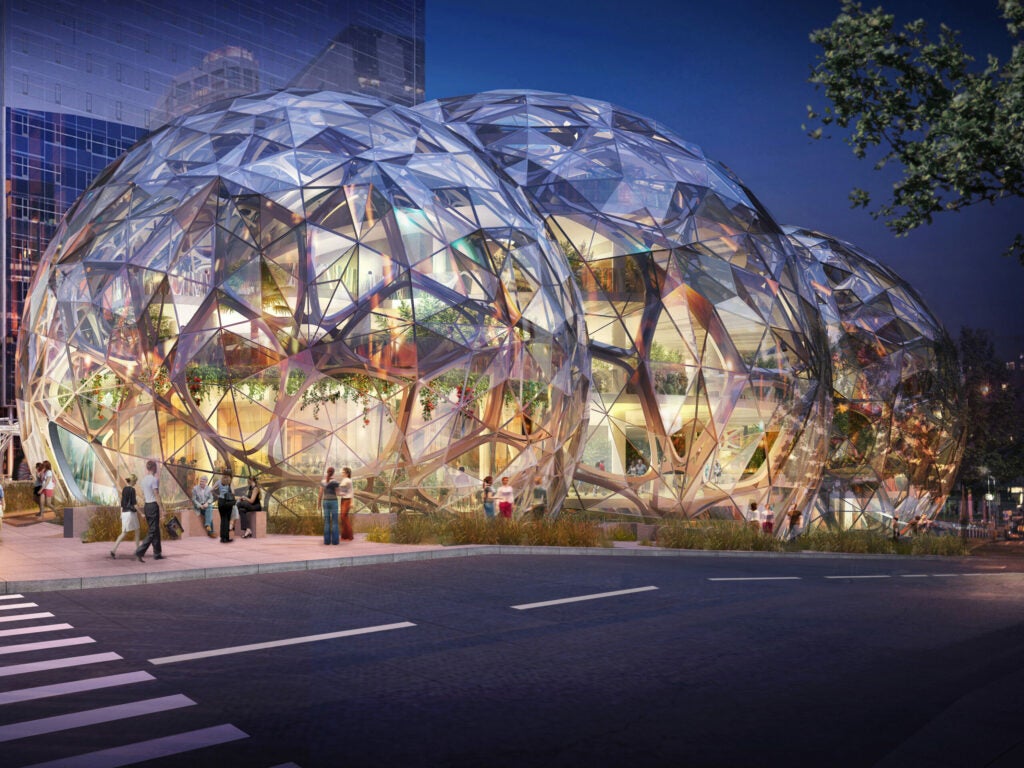 In addition to three high rise office buildings, Amazon’s new corporate headquarters will also include dome-shaped structures, right in the middle of one of Seattle’s busiest neighborhoods.

In the Denny Triangle section of downtown Seattle, one of the city’s fastest growing neighborhoods, Amazon’s new corporate headquarters is starting to take shape.

Amazon Tower I, a 37-story office building also known as Doppler, opened in December of 2015. A nearly identical building, Amazon Tower II, is projected to be finished in September, and Amazon Tower III (see a pattern emerging?) will be completed by decade’s end. Though these towers will forever change the look of Seattle’s distinctive skyline, another one of Amazon’s construction projects seems to be getting all the attention: the spheres.

Nobody’s really even sure of what to call them, and Amazon hasn’t yet committed to a name. Around the web, I’ve seen them referred to as biospheres, biodomes, bubbles, globes, spherical buildings, giant spheres, epic-looking glass spheres…you get the picture. When they’re done being built, the three intersecting spheres will give the company’s employees 65,000 square feet of green space in which to walk, talk, lounge, eat lunch, conduct meetings, brainstorm, and do whatever else it is Amazon employees do.

The Seattle-based architecture firm, NBBJ, intends for the spheres to be the “new visual focus and ‘heart’” of Amazon’s headquarters. Amazon unveiled the design in 2013, thereby scrapping a prior plan to put a six-story rectilinear office building in that location. And though the spheres are still far from complete—when I visited, crews were working on the steel exoskeleton—the structure is already fulfilling its promise to be the area’s visual focus. 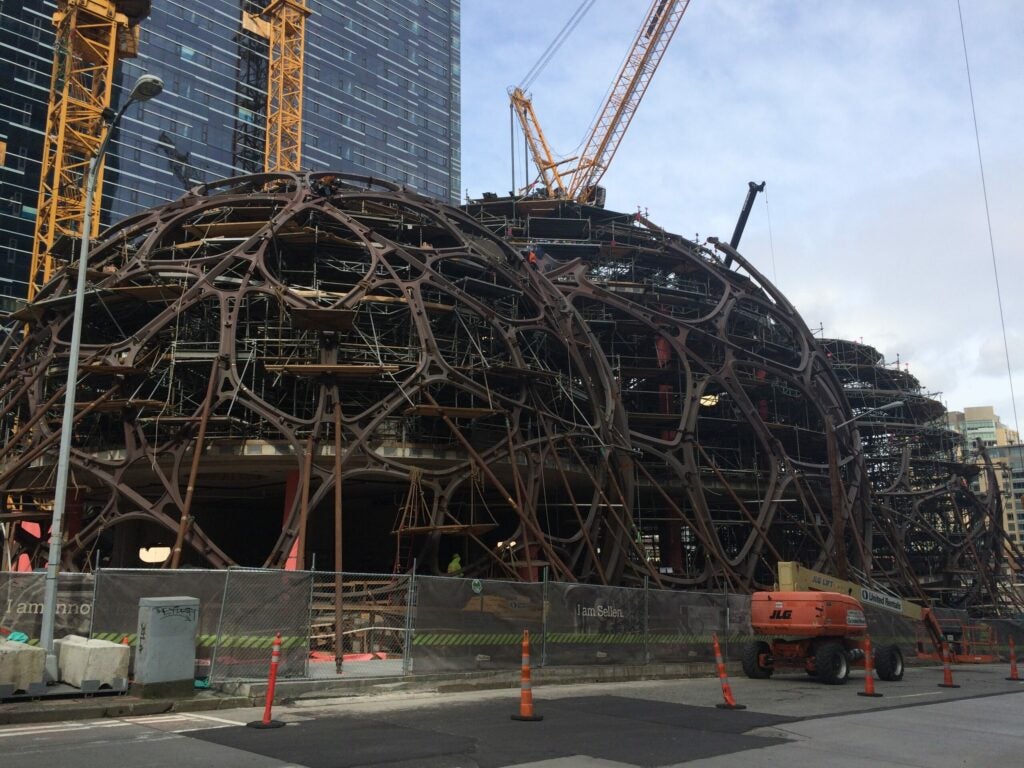 The domes, still under construction, are starting to take shape.

From blocks away, the spheres draw the eye. Their bold curves contrast sharply with the straight lines of the surrounding architecture. I wasn’t the only person to take pictures of the work in progress or simply gaze at it from the sidewalk. Even Amazon employees seemed to admire the spheres, though one might expect them to have gotten used to the sight by now.

What remains to be seen is whether the spheres will become the “heart” of Amazon’s headquarters, as NBBJ intends them to be. By gathering, assessing, and implementing data much like its notoriously data-minded clients, the multinational company has positioned itself as the firm de rigueur of the tech industry.

NBBJ architects have used data for every step of their design process. Amazon’s spheres, though unusual, rely on the idea that natural light, plant life, and the sheer act of walking reduce employee stress and improve job satisfaction more so than a standard office building. (I reached out to both the architecture group as well as Amazon for comment. Unfortunately, NBBJ declined to comment and Amazon didn’t provide any further comment other than what has already been made public.)

Researchers have looked into this connection. One study showed that workers performed better when plants were added to their office space, and another one found that people who worked in an office with windows performed better on certain tests and had better overall sleep than those who worked in a windowless office, or didn’t have access to a window. By creating an environment that optimizes sunlight, allows for trees to grow to full height, and simulates “montane ecologies found around the globe,” Amazon wants to give its employees a better chance at coming up with the next Prime, Kindle, or Echo. But a question remains: Will they visit and use the space voluntarily?

I’m not convinced. For Samsung’s headquarters in San Jose, the same architecture group, NBBJ, came up with a very different design from what you see in Seattle, and one that’s also supposed to foster collaboration. The ten-story, square, donut–shaped building will encourage employees to move between floors—something people don’t typically do on their own— because they’ll be within eyeshot of peers both above and below them.

Apple is also betting on the donut. Campus 2, set to open in late 2016 or early 2017, will occupy a staggering 176 acres of Cupertino real estate. The four-story ring will add 2.8 million square feet to Apple’s holdings and accommodate 12,000 employees.

Of course, it’s much easier for a company to spread out in suburban California. What sets Amazon apart is its decision to build in an urban setting, so close to downtown, with all the inherent constraints. There really is nowhere to go but up. And though I doubt employees will often leave their towers to stroll inside the spheres, I applaud the radical mark the company has decided to make on Seattle’s architecture.

American companies have long used skyscrapers to announce and symbolize their ascendancy. The Chrysler Building, Bank of America Tower, and yes, Trump Tower are more than just places where people work; they’re landmarks. Growing up in the Chicago suburbs, I was captivated by the Sears Tower. I knew nothing of Sears’ financial woes, or of the retailer’s former glory. All I knew was that on a clear day, it was rumored you could see Wisconsin from the observation deck.

I can imagine a kid connecting with Amazon’s spheres in a similar way. They’re alien but organic, futuristic but right there in front of you. And like all urban architecture, they bear scrutiny. To compare, the best photographs of Campus 2 were taken only last month, and from a drone. Sure, Apple’s donut will prevent leaks, but security comes at an expense. Campus 2 will not lead much of a public life. Meanwhile, Amazon is trying to be part of the neighborhood.

Acting as an unofficial member of the Denny Triangle welcoming committee, I entered Doppler on a Tuesday afternoon. Ascending the escalator to the lobby, I took in the building’s sleekness, its newness. Passing an empty waiting area and help desk, I turned the corner and found myself at Doppler’s security checkpoint. Employees swiped their badges; sliding glass partitions let them through. From where I stood, I could see a coffee shop, just out of reach. It was the end of the line. If Amazon’s spheres are meant to signal an era of transparency for the notoriously secretive company, they’re illusory. Doppler is proof of that. Like an ornery neighbor with a sign on his door, it sends the message: No Trespassing.

Update: After the article came out, the architecture firm behind the design, NBBJ, emailed us with updated renderings that better reflect the design as it stands now. Some images have been changed to reflect this. However, the firm declined to comment for the piece.