Should You Trust Big Pharma With Your DNA?

Privacy may be a small price to pay for personalized medicine 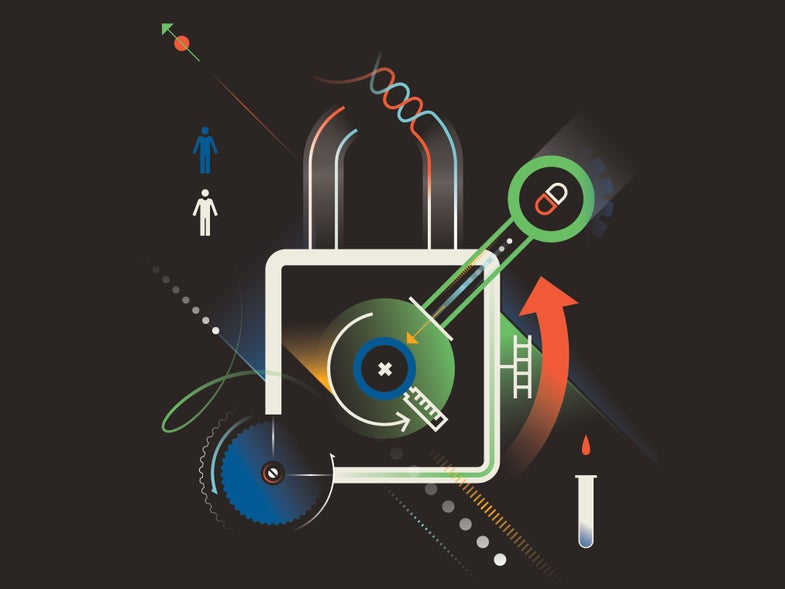 In January, the biotech company Genentech reportedly committed $10 million for access to the DNA of 3,000 Parkinson’s patients and their families. A week later, Pfizer made a similar deal for the genomes of 5,000 people with lupus. At least 11 more similar transactions are on the way–deals in which the private genomics company 23andMe stands to profit by commodifying its customers’ biological identities.

Off the bat, that sounds pretty creepy: offering up genetic information to the highest bidder. It’s sort of like what Google does with your whereabouts and searches. The thing is, selling or volunteering personal information may just transform medicine. A trove of data could give scientists the tools they need to develop gene-specific drug therapies for certain diseases. “We are hoping to ultimately develop Parkinson’s medicines, for example, that actually modify the disease as opposed to just treating symptoms,” Genentech’s Nadine Pinell says. Analyzing patterns in DNA could also help scientists find the genetic markers that trigger diseases, making preventive care more individualized and effective.

Even the White House is getting on board. In February, President Obama announced the $215-million Precision Medicine Initiative, which aims to compile genetic information from one million volunteers. “Ultimately,” Obama said, “this has the possibility of not only helping us find new cures, but it also helps us create a genuine health care system as opposed to just a disease care system.”

141: The economic return in USD on every dollar the federal government invested in the 17-year Human Genome Project

As with any modern data business, privacy is a concern. Even a small segment of DNA (23andMe looks at 750,000 base pairs out of 3 billion) can reveal a history of illness or predict future risks and be used, Maury–style, to identify baby daddies. But Dave Kaufman, program director at the National Human Genome Research Institute’s Division of Genomics and Society, says those worries are far-fetched. Research materials remain anonymous and closely guarded–although data breaches, like the one in February suffered by health insurer Anthem, punch a hole in consumer confidence. Legislation offers some protection, too: The 2009 Genetic Information Nondiscrimination Act makes it illegal for employers or health insurance companies to discriminate based on genetic data. The Act doesn’t address who controls data once it’s out there, but more policy is sure to arrive soon. And the White House initiative will certainly have plenty of security experts on the payroll.

Perhaps the most compelling reason to embrace DNA-sharing is that people don’t seem all that distressed about giving up their data. Eighty percent of 23andMe’s users have already opted to make their genomes available for studies. Whether they understand the fine print on what they’re signing away is up for debate. But most people, especially those with genetic disorders in their families, probably know they have more to gain from potential discoveries than they have to lose from unlocking their biological identities.

This article was originally published in the April 2015 issue of Popular Science, under the title “Should You Trust Big Pharma With Your DNA?”