Even without a DNA sample 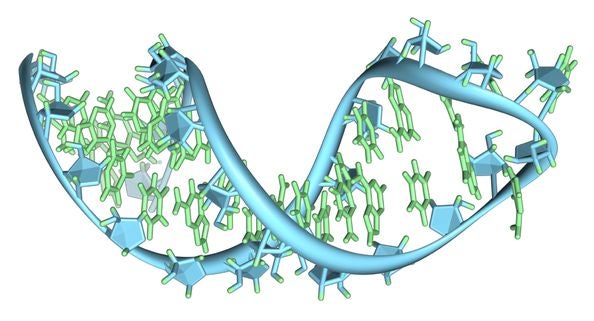 DNA databases are highly protected resources, because they contain the most detailed fingerprint that can be used to identify a person — from genetic predisposition to cancer, to paternity tests, to criminal histories. But apparently RNA databases, derived from large genome studies, can also be used to pinpoint a person’s identity, according to a new study. These databases are published in journals and are publicly available, and contain genetic information from thousands of people around the world.

Given these findings, scientists could use RNA and other deep personal data to improve patients’ health and serve the greater good, the researchers argue. But it also raises some questions about genomic privacy.

The study, conducted at Mount Sinai School of Medicine in New York, turns the process of RNA detection inside out. Researchers Eric E. Schadt and Ke Hao figured out how to infer a person’s DNA using RNA data; most studies use DNA sequences and then determine how RNA relays that genetic information.

The researchers looked at levels of RNA, which works as a messenger carrying out DNA’s instructions, in samples of liver tissue that were collected in two separate studies. One study looked at samples from liver donors, and the other studied people who were undergoing gastric bypass surgery. The Mount Sinai team looked for markers called expression quantitative trait loci, or eQTLs, which are locations on the genome that regulate expression of certain proteins or RNAs. They used algorithms that matched these eQTL patterns to variations in DNA bases, extrapolating the DNA sequences. Schadt describes it as “hearing a symphony and deducing which instruments are in the orchestra, essentially unwinding the developmental process to trace tissue samples back to RNA and the gene that instructed it.”

With this DNA inference, you could theoretically use RNA levels to match an individual to an independently obtained DNA sample — like scanning a barcode to see if two items match.

“DNA collected at a crime scene could be genotyped and then searched against the barcodes derived from the gene expression studies represented, say, in the GEO database, enabling investigators to potentially link unknown individuals at the crime scene to individuals who participated in a particular study,” the researchers write.

This finding rings some alarm bells about privacy — if you have stomach-shrinking surgery, and you’ve never donated DNA to a crime database, should the authorities really be able to track you down via your medical history? What about obtaining warrants for this information, when it’s technically already in the public domain? In a Mount Sinai news release, Schadt hints that the age of medical privacy may be drawing to a close.

“Rather than developing ways to further protect an individual’s privacy given the ability to collect mountains of information on him or her, we would be better served by a society that accepts the fact that new types of high-dimensional data reflect deeply on who we are,” he said. “We need to accept the reality that it is difficult—if not impossible—to shield personal information from others. It is akin to trying to protect privacy regarding appearances, for example, in a public place.”

The research appears in the online edition of Nature Genetics.