Your sense of smell is actually pretty amazing

Flavor: The science of our most neglected sense 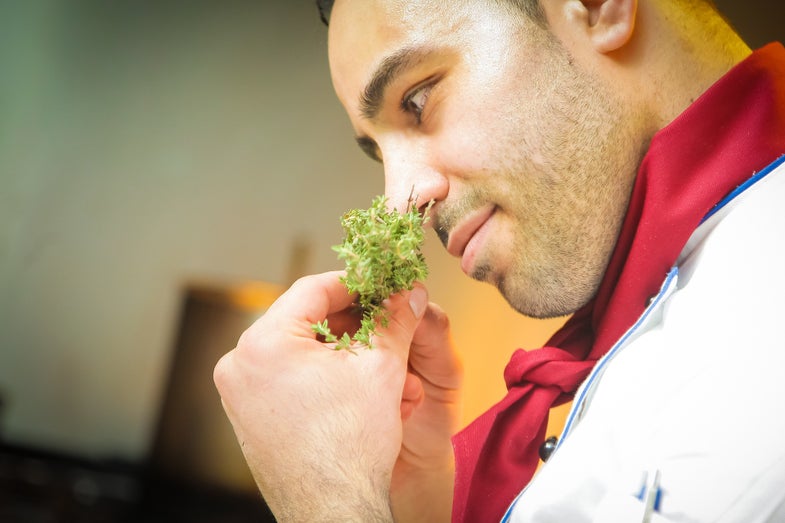 The following is an excerpt from FLAVOR: The Science of Our Most Neglected Sense by Bob Holmes

Our noses are a much more powerful tool than most of us realize—more sensitive, in many cases, than the most expensive piece of laboratory equipment.

Case in point: If you had happened to cross the University of California at Berkeley campus in the early 2000s, you might have noticed an undergraduate—blindfolded, earplugged, and wearing coveralls, knee pads, and heavy gloves—crawling across the lawn with nose to ground, zigzagging slightly back and forth. Was he rolling a peanut across the campus with his nose as punishment for some arbitrary offense during a fraternity initiation? Was he groveling before more senior fraternity brothers? No. He was following a scent trail laid down by a chocolate-soaked string—and doing it almost perfectly.

This rather odd spectacle was another of Noam Sobel’s slightly skewed brainchildren. (At the time, Sobel was a junior professor at Berkeley, though he’s now at Israel’s Weizmann Institute of Science.) For the chocolate-tracking experiment, Sobel and his students tested a total of thirty-two people and found that twenty-one of them could find and follow the chocolate track by nose alone, with all their other senses blocked. Better yet, when Sobel gave four of the volunteers a chance to practice repeatedly, every one of them got better at following the trail, moving faster and casting about less. When the trackers tried again while wearing a nose clip, every one of them failed to find the trail—clear proof that they weren’t navigating by some other cue that the experimenters had overlooked.

And it’s not just that we’re less worse than we thought: our noses actually compare favorably with those of other animals—even ones renowned for their sense of smell. Matthias Laska, a psychologist at Linköping University in Sweden, has been measuring the acuity of animals’ noses for decades, since long before Sobel’s chocolate study. The gold standard for this sort of thing is to measure the olfactory threshold, the lowest concentration of an odorant that can be detected—exactly what Doty’s machine tried to measure for my nose. Since you can’t just ask a monkey or an elephant whether it can smell something, Laska does the next best thing: He teaches the animal to associate the odor with a food reward—a yummy carrot for the elephant, for example, or a peanut for a squirrel monkey. Then he lets the animal choose one of two boxes: one unscented and empty, and the other bearing the tell-tale scent and containing the treat. If the animal picks the treat consistently, it must be able to smell the signal, and Laska repeats the test with a lower concentration of the odorant. When he gets to the point where the animal can’t tell which box has the treat, he knows the odorant signal has fallen below the olfactory threshold.

Over the years, Laska has used this method on everything from bats to mice to elephants to several species of monkey. Out of curiosity, he compared his results with what other researchers had reported for humans—and noticed that the animals weren’t necessarily any better smellers than we are. Intrigued, he started searching the literature for every study he could find that reported an olfactory threshold for a nonhuman animal, then looked to see if he could find a comparable threshold for humans.

The results showed that his initial comparisons weren’t a fluke. Human noses are more sensitive than those of rats for thirty-one of the forty-one chemicals that have been tested on both species, for example. Humans even outperform dogs in detecting five of fifteen scents. “The traditional textbook view that humans have a poorly developed sense of smell is not warranted,” says Laska. “We are not that hopeless.”

If so, why do customs agents use beagles instead of Bostonians to detect drug smugglers? Why don’t we track our dogs through the park as readily as they track us? Part of the difference may be that most of the time, we’re distracted by our senses of sight and sound. “Except for smell researchers such as me,” says Laska, “we are not constantly aware of the odor stimuli in our environment.” For one thing, it’s simply harder to pay attention to smells than to sights or sounds. If you’re looking for a friend’s face in a crowd, or scanning a bookshelf for a particular title, your vision is focused on a specific point in space. Similarly, when you’re trying to listen to one conversation amid a noisy cocktail party, you’ll turn to face the speaker and concentrate on that one spot. This tight spatial focus helps us notice what we see and hear.

By contrast, we don’t ordinarily focus our smelling in the same way. Sure, you can stick your nose into a wine glass, or take a sniff at the back of a toddler’s diaper—both instances where we really do pay attention to odors. But that’s not the way we usually use our noses. For most of the day, our noses aren’t focused on any one particular thing. Instead, we smell an undifferentiated mix of everything that’s going on around us, the olfactory equivalent of peripheral vision with nothing in the center of focus. Even when we’re trying to pay attention to a particular odor—what’s that herb in this sauce?—studies show we don’t get any better at detecting that target.

Excerpted from FLAVOR: The Science of Our Most Neglected Sense by Bob Holmes. Copyright © 2017 Bob Holmes. With permission of the publisher, W. W. Norton & Company. All rights reserved.