New research finds the mosquitoes are traveling much further than previously thought. 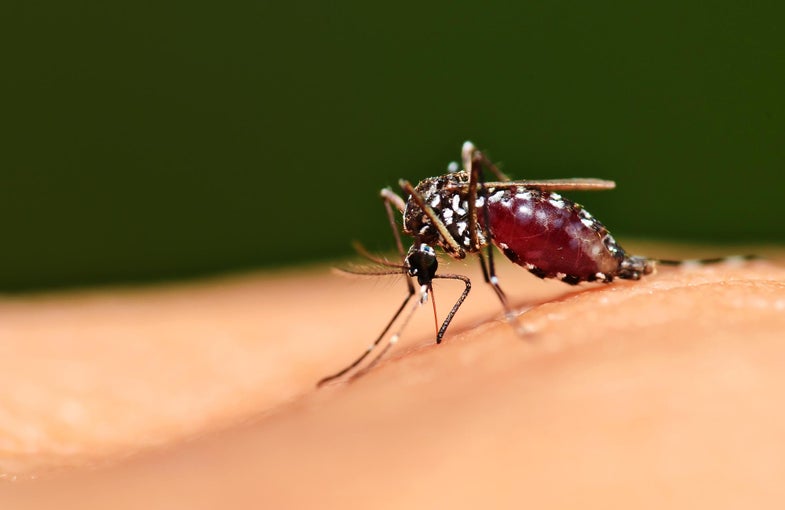 In the war against malaria and its mosquito hosts, we’ve deployed dogs, pesticide-spraying planes, and genetically engineered bacteria. The latest weapon against this deadly foe is a plain white balloon.

In West Africa, scientists are deploying these balloons, which capture mosquitoes and allow the researchers to figure out how high mosquitoes can fly. By doing so, they hope to piece together how the insects and the diseases they carry spread across long distances. Eventually, this information could be used to contain and eradicate diseases like malaria.

“This is truly a frontier,” says Tovi Lehmann, who studies the spread of mosquitoes and their pathogens at the National Institutes of Health and was the lead scientist on the new research.

In this multi-year effort, Lehmann and his team found many potentially disease-ridden mosquitoes can fly at much higher altitudes than previously thought. This means they can travel further, potentially explaining how the bugs survive periods of drought, colonize new areas, and spread disease. Lehmann presented an overview of the balloon research at the Entomological Society of America conference in November. The final results will be published either late this year or early next.

The idea for the balloons came out of a study of mosquito dormancy. The region they focused on, West Africa, is highly seasonal, characterized by lush wet seasons and parched dry ones. But not all mosquitoes there have the ability to hibernate through the droughts when there is no watery habitat for them to lay their eggs. This left the idea of mosquito migration, which hadn’t been seriously considered before, says Lehmann.

“This balloon is a very interesting approach and showing very interesting results—they are completely novel,” says Luigi Sedda, a spatial epidemiologist at Lancaster University in the United Kingdom who was not involved in the new study.

Over three years, Lehmann and his team of researchers used helium balloons in four villages in Mali. They tethered the balloons, which each had a sticky net attached for snagging small insects, at different heights, from 130 to 950 feet off the ground. They raised them overnight when mosquitoes are most active to see what insects were moving in the winds overhead. By cross-referencing the insects caught in the balloons with the insects caught in control nets near the ground, the researchers could be sure that what the mosquitoes the balloons picked up really did come from high up.

The scientists ultimately caught more than 3,000 mosquitoes, says Lehmann, and over forty different species, representing more than half of the different mosquitoes that reside in Mali. By looking at wind speeds for a given night to calculate the density of insects moving through the area, Lehmann extrapolated this number to conclude many millions of these mosquitoes traverse the high Malian skies at night.

“The presence of the numbers of mosquitoes at altitude collected in the study suggests they are moving far more than previously thought,” wrote Christopher Sanders, an entomologist and epidemiologist at the Pirbright Institute in the U.K. who also was not involved in the new research. But, without screening the collected insects for pathogens it’s difficult to say how exactly how the migration of the insects affects the disease transmission in humans.

Sanders hopes future research will do some of this disease detection work, while also correlating mosquito migration patterns with the movements of people and animals and seasonal disease outbreaks. Stacking all these trends together could help us get a clearer picture of the complex dynamics of a disease like malaria.

We still have a ways to go before we can successfully eliminate malaria, and it will likely be a combination of research efforts that beat the disease. But the balloons are providing novel information about mosquitoes that might help point those efforts in the right direction.