The latest “news” on fries is total garbage. 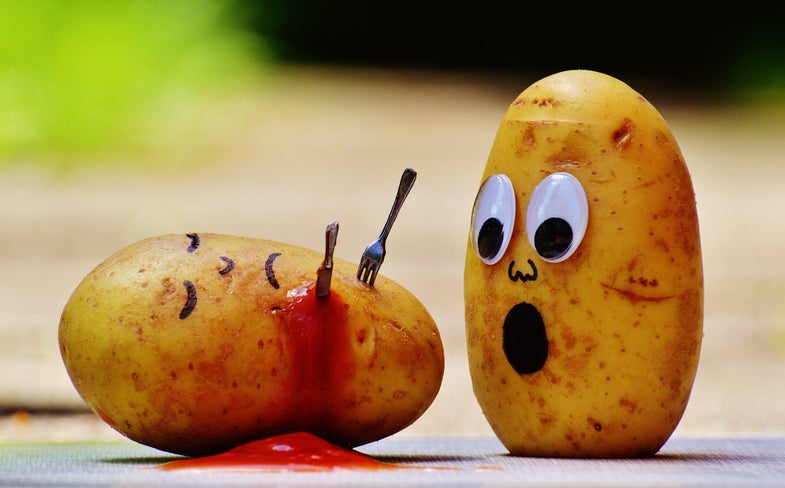 There are plenty of reasons not to eat potatoes, and only one reason to eat them: they’re freaking delicious. That’s the only reason you need. No one is eating fries because they think they’re healthy. But the next time you eat some delicious, oil-crisped taters and someone blurts out “hey, you know fries double your risk of mortality, right?” because they read a clicky headline, you can rest easy knowing that they are wrong. And superiority is the ultimate reward, right?

You could pretty much sum up the whole problem with the recent study on taters in one sentence: correlation doesn’t imply causation. Let’s all say it together. Correlation doesn’t imply causation. Now try to remember that next time you read literally any nutrition story. Just because a group of people who eats fried potatoes more than three times a week has a higher mortality rate than a group of people who hardly ever eat them doesn’t mean that potatoes are the source of those deaths. You can control all you want for age and socioeconomic status and every other obvious confounding factor. At the end of the day, people who eat fries three-plus times a week are almost certainly going to have other habits that make them more likely to die.

For starters, it’s likely that people who choose to eat that many taters are exercising less than the people who care enough about healthy dining to avoid that starchy temptation. And they probably consume more sugar generally as well. Or maybe they take in less fiber. You can’t eliminate the confounding effect of these other habits—that’s the real problem with nutritional studies like this. It appeared in The American Journal of Clinical Nutrition recently and it’s showing up all over the web. Nearly every article based on the study claims that fries doubled the mortality risk of the subjects, and media outlets aren’t technically wrong about the results. But first things first: it wasn’t potato intake generally, it was only fried potato consumption that the authors linked to higher death rates. Non-fried potato consumption didn’t lead to any increased mortality risk. Here’s a nice quote from the actual study that summarizes their findings: “After adjustment for 14 potential baseline confounders, and taking those with the lowest consumption of potatoes as the reference group, participants with the highest consumption of potatoes did not show an increased risk of overall mortality.”

It might seem weird that people who eat the most potatoes—you know, the thing that supposedly kills you—don’t die at higher rates than people who hardly eat any. Where did the “double” figure come from? The authors broke down the population into subgroups and found that some of the subgroups had an elevated mortality risk. Again: this is a common problem with nutrition studies. It’s easy to take your data and divide it up into chunks until something is statistically significant. In this case, correlations started looking significant when you looked at fried potatoes, specifically.

Now, it’s entirely possible that the authors always intended to break down the data into these specific groups. Maybe they didn’t reconfigure the data at all. But given the fact that this study wasn’t even about potato consumption to begin with, it’s at least a little suspect. The clinical trial they used data from was actually about osteoarthritis. There’s nothing inherently wrong with taking data from one study and analyzing it from a different perspective. It’s just a little weird to look at potato consumption data from a study that was intended to look at knee pain. It’s even weirder when you realize that to be a part of the study in the first place, you had to be one of the following: overweight, have had a knee injury, have had knee pain in the last year, or have had a parent or sibling who got a knee replacement. That’s a pretty specific subset of the population to look at if you’re going to make claims about potato consumption across an entire population.

Listen: fried potatoes aren’t good for you. Eating junk food is never going to be a healthy choice. Fries are full of starch and fat, and you should probably limit your consumption of both of those things—especially the starch. Starch is a simple sugar, and those cause your blood sugar and insulin levels to rise and prompt your body to store fat. They’re not great for you. But in moderation—and in combination with a healthy diet and exercise—you’ll be just fine. Enjoy your fries.