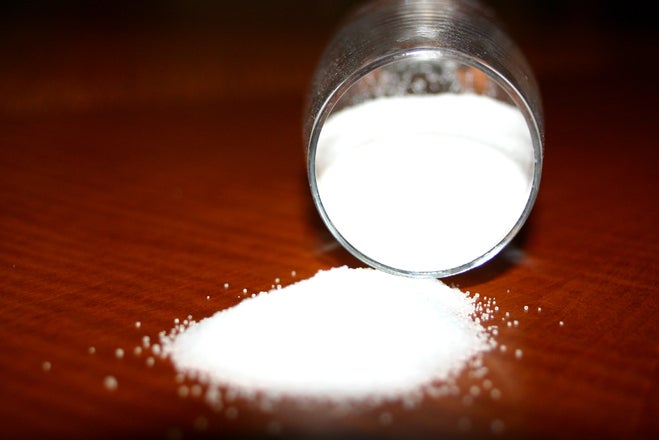 The more salt you eat, the thirstier you get. Right? Wrong, according to two studies released today in The Journal of Clinical Investigation. The research found that as salt consumption increased, people actually drank less water. And the high-salt diets seemed to make study subjects hungrier, too.

In the first study, a team of global researchers from German Aerospace Center (DLR), the Max Delbrück Center for Molecular Medicine (MDC), and Vanderbilt University, among other institutions, looked at 10 male subjects that were part of the Mars500, a joint project of the European Space Agency (ESA), Russia, and China designed to look at the psychological and medical risks of a mission to Mars. Study subjects are isolated, mission-to-Mars-style, for long stretches of time so scientists can keep tabs on their physical and mental state.

During a 105-day stretch of “spaceflight”, researchers reduced salt intake from 12 grams a day to 9 grams, and then to 6 grams, keeping each level constant for 29 days at a time. During the 205-day phase of Mars500, researchers conducted the same experiment—plus one more stage at the end, where subjects went from eating 6 grams of salt a day to consuming the original 12 grams a day. Meanwhile, subjects measured how much liquid they consumed and collected daily urine samples.

If salt made the 10 subjects thirstier, you’d think they’d drink more. But their records show that they actually drank less water as their salt intake went up. At the same time, they peed more, and had more salt in their urine. But their urine was also more concentrated, suggesting that the body was holding onto more water than usual.

A diet high in salt is typically associated with an increase in fluid intake. That’s why health authorities have suggested that diets high in salt—like diets rich in processed foods—might actually be contributing to the obesity academic by pushing us to drink more sugary and caloric beverages like soda. But that perspective was based mainly on after-the-fact survey data, not direct observation.

To understand the surprising results of the Mars500 study, the researchers turned to mice. They broke the mice into three groups—one fed a low sodium diet with tap water, the second fed a high sodium diet with tap water, and the third fed a high sodium diet with a saline solution—for four consecutive weeks. The studies in mice suggested that urea, which the body produces to get rid of nitrogen, was accumulating in the kidneys, counteracting the water-attracting force of salt. But making urea is energy intensive, which could explain another surprising finding: while the mice on a salty diet didn’t drink more, they did eat more. Perhaps their bodies were looking for urea-making fuel.

It’s important to note that a study on mice can’t necessarily answer questions about men. And a study of 10 men can’t necessarily answer questions about all men—let alone all humans. While women have expressed interest in going to Mars, neither the 105-day segment nor the 205-day segment of the Mars500 project included women. Similarly, all of the mice in the subjects were male.

But the study does suggest that urea—long considered a mere waste byproduct—could actually perform the function of helping our bodies dispose of salt while holding onto water. Clearly this is one area of nutrition that warrants further investigation. But in the meantime, you probably shouldn’t use it as an excuse to chase your salty potato chips with more potato chips—there’s no harm in drinking a glass of water or two instead.