The Month In Plagues: An Enterovirus Outbreak, Pubic Lice Are Not Going Extinct, And More 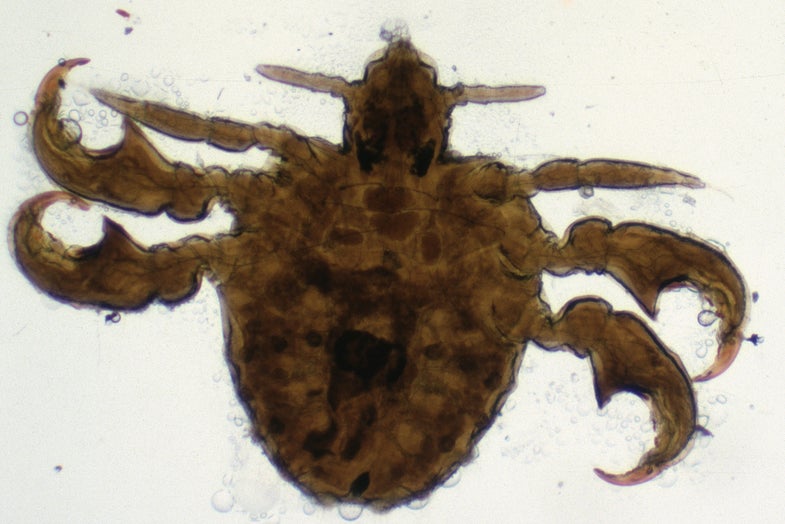 The Ebola epidemic continues in West Africa. Vox has a nice infographic exploring the history of the virus. In addition to killing more than 3,000 people, the epidemic threatens the region’s food supplies and economies. It is also overwhelming hospitals, making it difficult for patients with other illnesses to receive treatment. Here’s a great feature at Nature describing an Ebola-stricken hospital ward in Sierra Leone.

An enterovirus outbreak that started in the Midwest has spread across the US, mainly affecting children. A few kids in Colorado with the respiratory illness have also suffered from paralysis, and experts are investigating whether the symptoms are connected.

And Aeon has an interesting essay on the history of using math to model epidemics.

Speaking of Ebola, a new vaccine is being tested on humans. And speaking of dengue, a recent trial on its own vaccine apparently went well. Both would be the first vaccines against their respective viruses.

The Atlantic has a story on the history of tuberculosis vaccine attempts, as well as a recent outbreaks in an El Paso, Texas nursery.

Virginia Hughes pondered why there isn’t a broader effort to vaccinate dogs in order to lower rabies rates at her National Geographic blog. Meanwhile, an effort to do just that has helped lower cases of rabies in Bangladesh, according to the World Health Organization.

And speaking of rabies, check out this video of a rabid bat attacking a camper who’s playing a guitar in the woods.

New research suggests that previously undiscovered antibiotics may be found in a place we’ve never looked before: our own microbiome.

Researchers at MIT are using a new method called CRISPR to edit genes in antibiotic-resistant bacteria, which could help make the bacteria vulnerable to antibiotics.

Still, some companies are voluntarily forgoing antibiotics. Perdue recently announced that they would stop feeding certain antibiotics to their chickens. Maryn McKenna has context at her Wired blog.

Retro Report has a nice video and story about the history of Colony Collapse Disorder in bees.

Unauthorized GMO wheat has been discovered in Montana, raising concerns about the USDA’s ability to monitor field trials.

Pesticide levels have dropped in US waterways, which is a good thing for human health. But the levels that do exist still threaten aquatic life in urban streams.

Paul Voosen has a great story on GMO oranges at National Geographic.

And a new study suggests that a big threat to crops in the near future will be fungus.

Bounties on lionfish may help keep the invasive fish in check.

At the annual meeting of the Society of Environmental Journalists, reporters dined on an unusual spread of New Orleans invasive species, from termites to nutria.

And here’s a lovely story about a group of conservationists who are hand-weeding parts of Connecticut to curb a nasty invasive vine called mile-a-minute.

Remote-controlled insects may someday do our bidding.

There may be an uptick of disease-carrying ticks, thanks to climate change.

Speaking of ticks, here’s an awesome story by Cat Ferguson at Modern Farmer about tick-eradicating cowboys in Texas.

Scared of cockroaches? Here’s a great story about overcoming that fear, by Rachel Nuwer at BBC Future.

And sorry, despite popular reports, public lice are still a thing, says Gwen Pearson at Wired.