Losing To Win: How Fungi Cause Trouble in Cystic Fibrosis

Loss of a specific function means greater virulence in patients 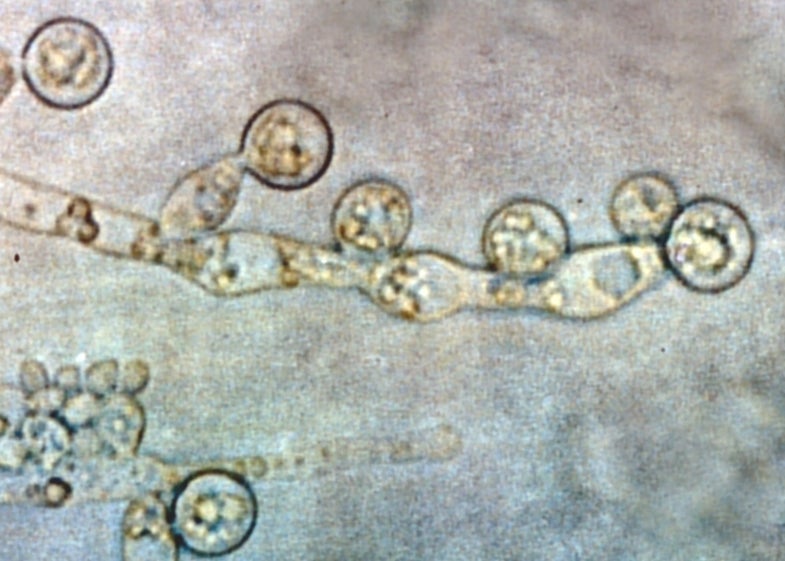 Cystic fibrosis (CF) affects about 30,000 Americans leaving them with a variety of symptoms ranging from gastrointestinal problems to the more recognized respiratory complications. The condition is caused by a mutation in the genetic makeup of individuals leaving them unable to control salt concentrations in the cell. This single alteration allows bacteria and fungi to grow freely in the lungs leading to recurring and/or chronic infections.

Within the lung, bacteria such as Pseudomonas aeruginosa take advantage of the altered salt concentration and the subsequent production of mucus to form biofilms leading to an increased chance for infection and respiratory complication. As for the fungi, they take advantage of the compromised immune system and find a home in the warm, moist, mucus-filled environment. Some species, such as Aspergillus fumigatus, are inherently pathogenic and must be dealt with immediately. Yet, another group of fungi, yeasts, seem to vary in their ability to cause troubles.

When a yeast cell enters the lung, it can act as a bystander, enjoying the environment and offering no ill will. But over time, the yeast may gain a stronghold and begin a change from a cellular appearance to one that forms branches, also known as hyphae. When this happens, trouble is soon to follow. The immune system cannot deal with these larger structures and attempt to find other ways to combat the growing colony. Unfortunately, this leads to a response akin to an allergy leaving the person with even more respiratory struggles. Without proper treatment, the process can end up being life-threatening.

The dire consequences of hyphae formation has led researchers to figure out how yeast cells can go from harmless colonizers to potential killers. Most work has focused on polymicrobial interactions between bacteria and fungi through chemical communication, also known as quorum sensing. Yet, in 2011, research suggested the bacteria prevented hyphae formation through this route. By 2013, the relationship was proven to be testy rather than mutually beneficial.

The confounding results meant yeasts had to find another route to trigger hyphae formation. With the immune system and now bacteria out of the question, the only possible option was inside the fungal cell at the genetic level. But to determine which genes were responsible, a large-scale analysis had to be performed.

Last week, that study happened. A Canadian team of researchers unveiled the first global analysis of fungi in the cystic fibrosis lung in the hopes of determining the reason yeasts became pathogenic. What they found suggested the old adage of sacrifice in the name of greater gain is alive and well in the microbial world.

The group examined 111 sputum samples from 28 different CF patients. The samples were then analyzed to determine the variety of fungal species living in the lungs. Standard tests such as growth variability and susceptibility to antifungals were performed to examine whether any of the patients were outliers from the others in terms of their fungal population. When that was over, the examination for the trigger could begin.

The fungal species of choice was Candida albicans. It’s known to have a dual role in human ecology both as a bystander and also a hyphae-producing pathogen. Isolates were examined at the genetic level in the hopes of finding any type of mutation that could lead to virulence. While a variety of mutations were found, most were unique to the isolate. Yet, there was one change that seemed to be globally present and also could control the transition from cell to hyphae.

It’s called NRG1 and acts as a negative regulator of glucose-repressed genes. It was initially found in another yeast species, Saccharomyces cerevisiae although it is also found in Candida. The gene is responsible for keeping the cellular form of the yeast and prevention of hyphae. Lower expression allows the transition from harmless entity to growing pathogen.

When the researchers examined the extent of change to NRG1, they expected to see little change in the gene makeup. But in almost every case, the actual sequence was changed. The result was a complete loss of function; NRG1 was simply not working. This meant the fungal cells could transform into hyphae without any restrictions. As for those bacteria capable of controlling this switch, they were completely ineffective.

The results of this study are less than encouraging for CF patients. According to the authors, this loss of NRG1 is most likely due to the consistent pressures attempted to prevent hyphae formation. When all else fails, the gene is sacrificed so the transition can occur.

Moving forward, this study may allow for more rapid analysis of fungi in the lungs and gain an appreciation of the situation based on the status of the gene. If the mutation is found, public health officials will know this means trouble and can engage in an antifungal strategy to clear the invaders. Although this means more medications for patients, at least it will help to prevent both short term and lasting consequences that could affect quality of life and ultimately, life itself.