The Forgotten Woman Who Made Microbiology Possible

Lab work can be a lot like cooking. You have to follow directions to measure, mix, and heat different chemicals... 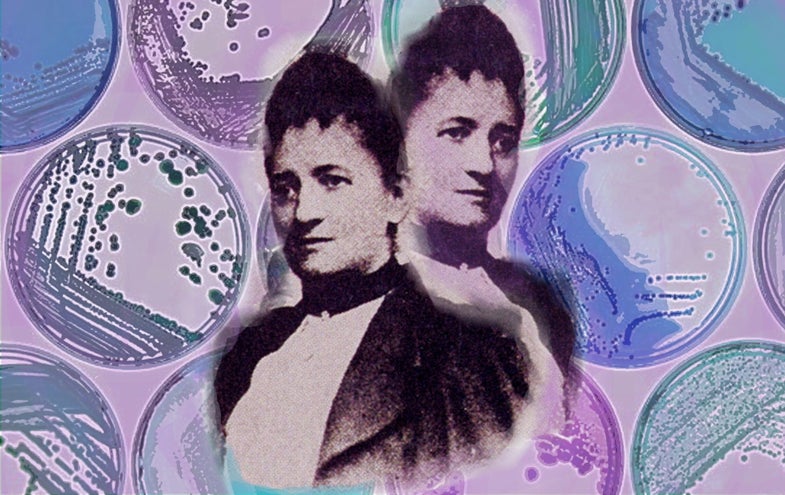 Lab work can be a lot like cooking. You have to follow directions to measure, mix, and heat different chemicals to the right temperature to get the desired result. For some experiments, the desired result is actually something that can be eaten by a range of different organisms. In microbiology labs, feeding bacteria is a major preoccupation, and preparing the proper growth medium in a lab’s “kitchen” is often the first step of any experiment. Petri dishes are filled with a sort of savory Jell-O, a nutrient-filled semi-solid matrix that creates a cozy home for bacteria to grow. Without the solid-yet-moist surface of the gel where the bacteria can cling to and reproduce, there’s little hope of separating a bacterial cell from its environment in order to study it. In the earliest days of microbiology, scientists were stumped about how to isolate bacteria. That is, until the family cook—a woman named Angelina—changed everything by bringing her culinary insight into the lab. Before Angelina, the work of classifying different bacteria seemed hopelessly complex. Unable to differentiate them, Linnaeus classified all bacteria in the order Chaos in 1763. (Today, Chaos is a genus of giant amoebae.) In the 1800s, scientists studying the spots of fungus growing on moldy bread and meat began to realize that each spot was an individual species of microorganism, which could be transferred to a fresh piece of food and grown in isolation. Inspired by these early food-based studies, Robert Koch used thin slices of potatoes as naturally occurring “Petri dishes” when he began his studies of bacterial pathogens. New techniques to isolate, grow, and study the behavior of individual species of microorganisms were developed in Koch’s lab in the last decades of the 19th century. In a 1939 article, Arthur Hitchens and Morris Leikind described the history of these crucial microbiological techniques and the development of the solid medium still used in labs today. They begin by writing that Robert Koch’s “genius lay in his ability to bring order out of chaos. Starting as it were with a box of miscellaneous beads, varying in size and shape, each bead a scientific fact, he found a thread on which the beads could be strung to form a perfect necklace.” But they continue to highlight not only the genius “bead stringers” but also the numerous and talented “bead collectors” who help to build the tools and collect the data that the bead stringers use. For Koch’s legendary discoveries of the bacteria that cause diseases like tuberculosis and cholera to be possible, he needed new techniques to effectively isolate bacteria beyond carefully sliced potatoes. He needed the tools that were developed by his less-celebrated laboratory assistants, like Julius Richard Petri’s dishes and Walther Hesse’s solid growth medium.

But behind the talented laboratory technicians that supported Robert Koch’s genius was an even more unsung heroine of microbiology. It was Walther Hesse’s wife (who was often an assistant and scientific illustrator for the lab) Angelina Fanny Hesse who made the isolation of bacteria possible. In the early 1880’s, Walther was struggling to find the right sort of gel for Petri’s dishes. He was experimenting with using gelatin to congeal the nutrient broth that the bacteria ate, but bacteria also liked to eat the proteins that congealed the gelatin, chewing through the gel and ruining the experiments. Gelatin also had another major drawback: it would soften and begin to melt at the incubation temperatures required for growing the bacteria.

Angelina, who cooked both the family’s meals and the beef stock that the bacteria ate in her kitchen, suggested that Walther use agar-agar, which is more heat-stable than gelatin and used to make soups, desserts, and jellies, particularly in Asia. (She had learned about it from Dutch friends who had lived in Indonesia, which was a colony of the Netherlands at the time.) Agar is a sugar polymer derived from algae that most bacteria can’t digest. Once it’s boiled and cooled, it forms a tough matrix that stays solid at much higher temperatures than gelatin.

With agar, many of the technical problems hindering Hesse’s—and therefore Koch’s—experimental progress were solved. Koch briefly mentioned the development (though he fails to mention either Walther or Angelina) in his 1882 paper announcing the identification of the bacteria that causes tuberculosis: “The tubercule bacilli can also be cultivated on other media…they grow, for example, on a gelatinous mass which was prepared with agar-agar, which remains solid at blood temperature, and which has received a supplement of meat broth and peptone.”

Angelina Hesse’s creative insight was thus written out of history with the ever-present passive voice of the scientific literature. Even today, the Wikipedia article about Robert Koch masks Angelina’s contribution to microbiological history, simply stating that Koch “began to utilize agar to grow and isolate pure cultures.” In the late 19th century, the use of agar to isolate bacteria was initially referred to as “Koch’s plate technique,” but since the early 1900s only Petri’s name remains in common use. In their article, Hitchens and Leikind suggested (seventy five years ago) that “plain agar” be referred to as “Frau Hesse’s medium” to acknowledge her forgotten “service to science and to humanity.” Perhaps it’s finally time that we remember Frau Hesse and celebrate all the ignored “bead collectors” working in the laboratories and kitchens that make science possible.