A phone so secure, its makers will pay you if you can hack it 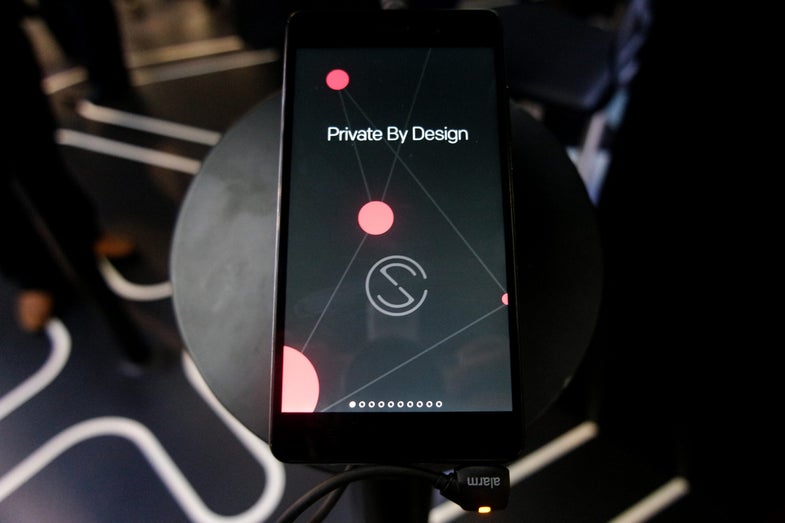 There’s nothing worse than getting hacked. Ask anyone at Sony, which lost an estimated $100 million in the malicious hacks committed against the company last year. Silent Circle, a company founded by Internet security legend Phil Zimmerman, wants to bring those type of hacks to a halt. The company’s solution: An end-to-end service that starts with an ultra secure smartphone called the Blackphone 2.

The Blackphone 2 is an update to the original Blackphone, which was long heralded as an “NSA-Proof” device before it was eventually discovered that no one can can escape the NSA. The second-generation of the device looks and feels a lot more high-end than the original version. There are still no aesthetic details on the phone, but the new version is slightly bigger and features a much better screen. The display is now 5.5 inches (phablet territory) and displays Full HD, which brings it up to the standards of most premium smartphones.

The phone runs on a modified version of Android called PrivatOS, which means that it’s compatible with all Android apps. The company is able to secure calls, texts, and contacts using its own apps called Silent Phone, Silent Text, and Silent Contacts respectively. The apps can be downloaded in the Google Play store, and they’re available to anyone with a standard Android for sending and receiving encrypted messages.

One of the new features on the Blackphone 2 is the ability to create different “Spaces,” which are essentially different user profiles on the operating system. The phone is able to virtualize a new operating system with each new space, meaning that each account is completely isolated. It’s as though you’re running an entirely different phone when you switch between users.

Although the standard version of Android can already create several logins, the virtualization that occurs on the Blackphone is much more secure and is unique to PrivatOS. Along with its advertised security, the operating system is also incredibly easy for people to navigate and control. The security settings on the phone allow users to manage the type of information coming and going from every single app, breaking down data into categories such as contacts, location, and more.

If the device is ever lost, don’t fret: It can be remotely wiped. The Blackphone 2 is especially great for IT professionals to use because of Silent Circle’s device management system. In essence, IT professionals can edit smartphone permissions (such as what apps you can download) in bulk. They also make it easy to distribute different permission sets using QR codes. That means that IT pros can have employees set up their own phones by simply scanning a code.

To ensure that the Blackphone 2 always remains safe, the company has a bounty program in place that will pay any hacker $128 for finding small bugs. (You can get even more money if the vulnerability is more serious.) Plus, the company promises to fix any critical security bug within a 72-hour window, but so far, all reported bugs have been fixed within a 48-hour window. The Blackphone costs $649 and is available now.