CES 2013: Hands On With The Razer Edge Gaming Tablet

A goofy gaming tablet with detachable joysticks ends up being a damned impressive Windows 8 machine. 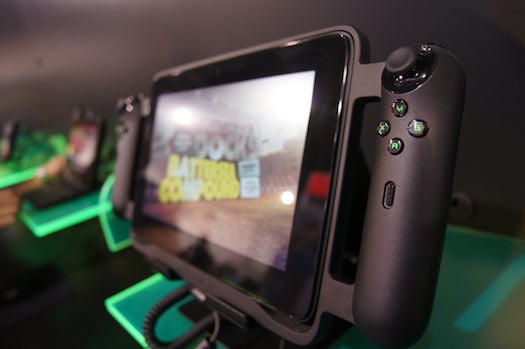 We’ve known about the Razer Edge–a Windows 8 tablet designed top to bottom for gaming–for awhile, but today at CES was the first time we’d actually gotten a chance to play with it. And, despite my own reservations about Windows 8, small Windows 8 tablets, gaming tablets, and tablets with detachable joysticks, as soon as I started using it, I got it: this is probably the best Windows 8 tablet I’ve used, period, and it’s a hell of a lot of fun.

The Edge, in its most basic form, is a 10.1-inch tablet with the specs of a mid-level gaming machine. At its cheapest, that’s an Intel Core i5 processor, Nvidia GT640M LE GPU, 4GB of DDR3 RAM, and a 64GB SSD, all for $999. Bump that to $1,299 and you’ll double the SSD’s storage and the RAM, and replace the i5 with an i7 processor. That’s powerful enough to run Dishonored and Dirt Showdown with tough settings, smoothly. 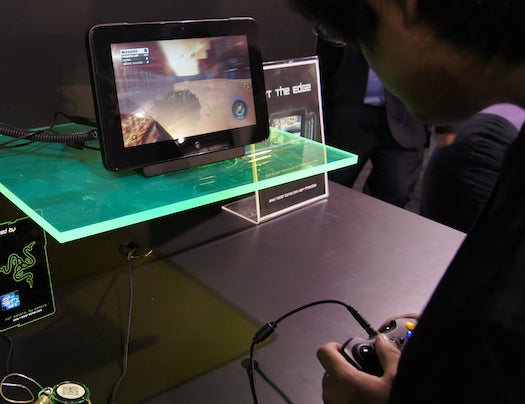 The hardware is nice; it’s chubbier than I expected, but not particularly heavy. It’s not iPad-thin, but then, it’s far more powerful than an iPad, and I didn’t find it wildly uncomfortable to hold. The build quality seems sturdy, though a bit plasticky, with a nice little curvy bulge to the back. But where it really gets interesting is in the accessories. There’s a keyboard sleeve, which is kind of small but okay to type on, a dock for outputting to a monitor or TV, and a joystick attachment that really impressed me, pictured up top. It gives you two joysticks, a D-pad, four face buttons, and six shoulder buttons, comfortably laid out, plus force feedback vibration. It turns the tablet into some kind of hyper-powered Wii U controller.

I did find that with the joysticks attached, the Edge was a little heavy to play like a Nintendo DS for long periods of time. But performance was impressively smooth, the screen is awesome–much better quality than the Microsoft Surface’s–and playing games like this was really fun. That was the key takeaway–companies have been trying for awhile now to make gaming tablets, and mostly, they run Android, which is an immature and limited gaming platform. But not Windows! Give a tablet the full breadth of Windows games and some solid software, and you’ve got a very impressive gadget. 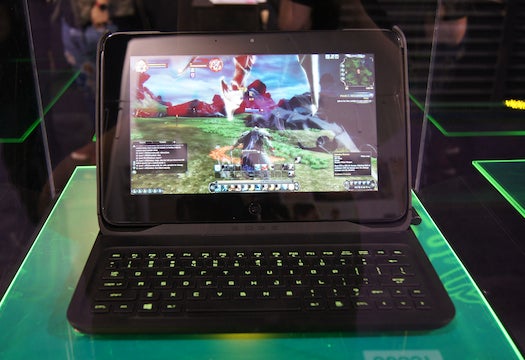 I could easily see recommending this for a gamer interested in a new, non-crazily-priced Windows machine. The price strikes me as pretty fair, actually; no way could you get a system anywhere near as portable with anywhere near the gaming performance of this thing. We’ll keep you updated once we get our review unit in, probably later this month.