Anyone can compost their food waste (and everyone should)

And it doesn’t have to smell. 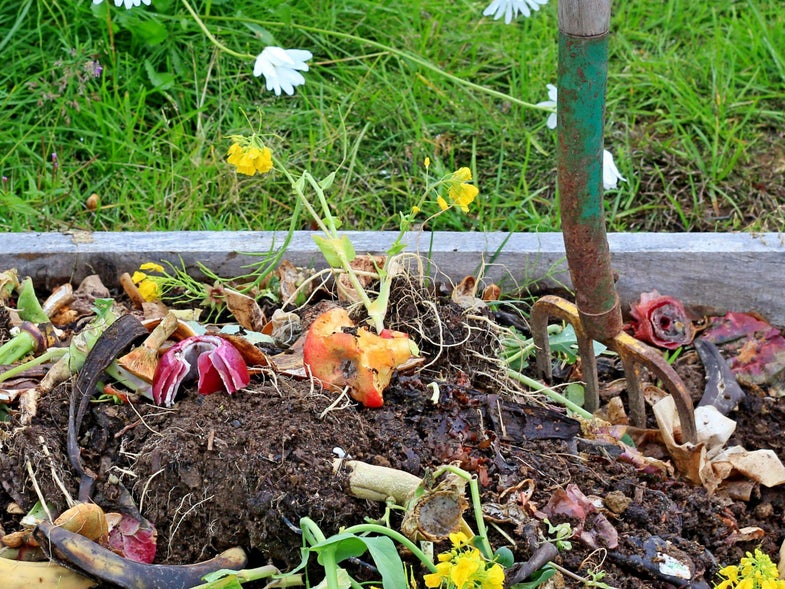 A surprising number of trash can be placed in a compost. Deposit Photos
SHARE

When we think of composting, we tend to think of enormous dumpsters full of everything you didn’t eat for dinner that day, mixing together into an earthy, smelly, nasty concoction that seems to have a life of its own. But at its most basic level, composting is simply the deconstruction of any organic material. And it’s probably already happening, whether you realize it or not, in your kitchen’s plastic-lined garbage bin.

In honor of Earth Day, consider this: In a study on the efficiency of household composting, researchers had a series of households compost for an entire year and tracked the waste they avoided. They found that, on average, composting saved 277 pounds of waste per person per year. Those scraps would otherwise have gone to a landfill or other garbage treatment facility. The results of the study, the researchers say, show that organic waste that would normally be placed in the garbage can be reduced by more than 80 percent.

But if organic matter is always going to decompose, why does it matter if it does so above ground or under the cover of a landfill? When food decomposes in a landfill, it does so underground. That means that it doesn’t have any access to oxygen and undergoes a process called anaerobic decomposition. This releases methane, a greenhouse gas that contributes to climate change. When organic matter decomposes above ground (in compost), it has access to oxygen and thus undergoes aerobic decomposition, which doesn’t generate methane.

If you think composting is a dirty, unpleasant activity, that’s far from the truth. It can be really fun, like one big science experiment. Here’s how to get started:

There are many variations on composting, and the best one for you depends on where you live—like an apartment or a house with a backyard—and what level of involvement you want in it.

Compost for a tiny apartment

If your living space is already squished, you might think composting is out of the question. But there are two easy ways to compost indoors. One way is called vermicomposting, which, as the name implies, employs the help of worms to break down the organic matter. This site provides great step-by-step instructions on how to start one, but the idea is simple: Get a bin with a lid, fill it with soil and red wiggler worms, and dump your organic matter in there. The worms will do the work to break down your garbage into something called castings, which are extremely rich in nutrients. Then you can transplant your castings into potted plants or a small garden.

Another popular method for tight living quarters is something called Bokasi, which originated in Japan, and uses a starter of specific microorganisms that break down your organic matter. Like the vermicomposting method, you need to purchase a starter of these microorganisms, but after that, it’s easy to maintain. You can even add dairy and meat to the compost, and the smell—according to Bokasi-ers—is minimal.

Compost for someone with a backyard

If you live in the ‘burbs or the country (basically anywhere that isn’t the city) composting gets a little easier. But yard-havers still have two main options to pick from: hot and cold.

If you are looking for a composting method that is super low-maintenance, then cold is for you. Create an enclosed area, or just pick a spot that you don’t go near very much, and dump all the leaves, yard waste, and grass you’ve got into the pile. Wait six months to two years ( continually adding new stuff and turning it around a bit with a rake or a shovel) and it’ll eventually decompose.

If you don’t want to wait around but are willing to do a little bit more work, try the hot method. For this method, you need the right type of “starter” material. That involves an equal balance of ingredients that are carbon rich and nitrogen rich. Things like paper, twigs, and leaves are rich in carbon while grass, coffee and tea grounds, fruit, and vegetables are rich in nitrogen. The proper mixture is key—you should have far more carbon than nitrogen. Once you have enough materials to fill a pile that’s at least 3 feet by 3 feet, start adding the organic matter in. Once together, the microorganisms inside will begin their work immediately. The mixture will keep heating up at first (a good sign), but after about a month, it will cool down and finish the composting at about half that temp. It takes a few months time, but the process will yield nutrient-rich soil that you can use throughout your garden.

Just let someone else do the composting

If you can’t or don’t have the time to do any of these things, don’t fret. You can still do your part. Often, local farms and even Farmer’s Markets will collect your compost material weekly—or on a regular schedule—and sometimes they’ll even do it for free. If you choose this route, collect all your compostable waste (that includes fruit and vegetable scraps, egg shells, used tea leaves, and coffee grounds) in a big reusable freezer bag. That will keep it away from everything else in your kitchen and will prevent it from attracting bugs and smelling.

Once you get into it, composting can be addicting, and become less like a chore and more like a fun activity. And even if it never turns into your favorite hobby, it’s something you can do daily to help the planet. Happy Earth Day, and happy decomposing.