Now Ships Can Get Advance Warning Of Monster Rogue Waves 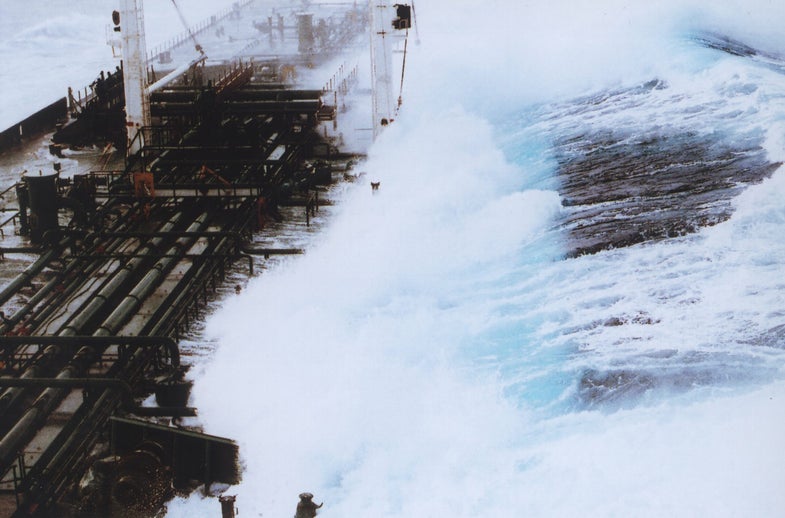 It’s bad enough to be on the sea during a storm, with the ship rocking in the high winds and rolling with the tempest-tossed waves. But it could always be worse.

Rogue waves are twice as large as the surrounding waves, which in stormy seas can be absolutely massive. Seafarers have reported waves like this over 110 feet tall, large enough to swamp a ship.

Rogue waves are unpredictable, coming seemingly out of nowhere. Until now, the only warnings that a ship’s crew had of an approaching rogue wave were the few seconds between when they saw the wall of water towering over their ship and when it struck. Now researchers at MIT think they may have developed a method that would allow ships to have 2-3 minutes of warning before a rogue wave appears. This could give them enough time to prepare for the hit or possibly maneuver the ship so that it hits the wave at a better angle (although the latter would be hard to do).

By analyzing patterns in the ocean, mechanical engineer Themis Sapsis noticed that rogue waves could be identified by looking for groups of waves interacting, as opposed to the more independent waves that normally roil the oceans.

“These waves really talk to each other,” Sapsis said. “They interact and exchange energy. It’s not just bad luck. It’s the dynamics that create this phenomenon.”

Sapsis and his team developed an algorithm that looks for these patterns and can alert seafarers to unusual activity using sensors already onboard.

By using high-resolution radar or LIDAR sensors to watch the movement of waves around a ship, and applying the algorithm developed by Sapsis, crews should be able to detect rogue wave minutes before they form, giving them enough time to adjust course, or at least hang on.

The method hasn’t been used in the field yet, so the next step will be ships or offshore platforms putting the system to the test.