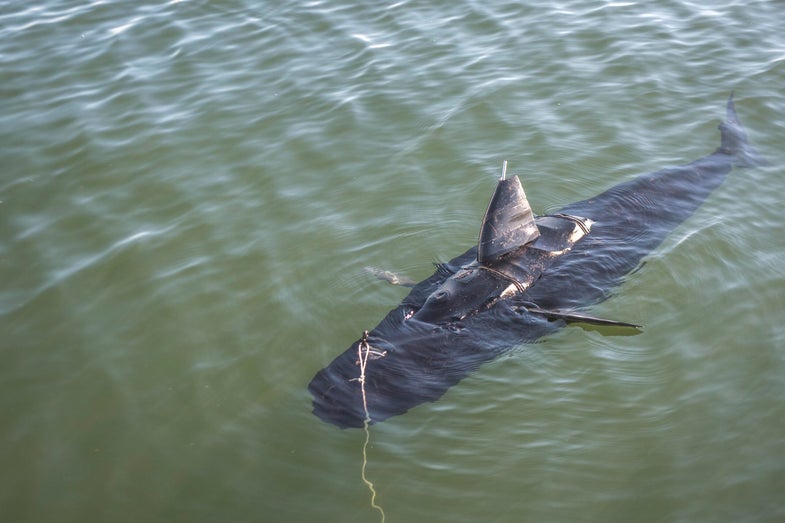 Last week, a new U.S. Navy robot swam near the Joint Expeditionary Base near Norfolk, Virginia. The robot is known by two names that run the gamut from Pixar-cuddly to over-the-top action movie. Project Nemo, a.k.a. GhostSwimmer, is a tuna-inspired bot that might protect soldiers in the future by going where humans can’t or shouldn’t.

The Navy plans to use the GhostSwimmer in “covert, riverine, or littoral” environments — shallow waters that better suit the bot’s tuna-inspired body than a boat. BioSwimmer, Project Nemo’s non-military variant, has already found a home in the Department of Homeland Security, where it will inspect harbors for underwater explosives. In Naval use, the GhostSwimmer will work similarly, exploring and mapping shallow waters to make sure they’re safe for larger vessels. Project Nemo can swim faster than the civilian version, giving it the option to scout for short periods of time at up to 17 miles per hour, or swim for a long time at around 3 mph.

Befitting a robot with “ghost” in the name, Project Nemo is designed for covert warfare. Its surveillance capabilities and silent movement let its remote pilot use it as a tool against hostile boats, finding weaknesses for other vessels to exploit. Controlling it through an app on a laptop, the GhostSwimmer’s pilot can send the bot forward, letting the Navy see threats before they become deadly. Finding Nemo this is not. Seeking Nemo, it definitely is.

Watch it swim underwater below: