How Can A Commercial Airplane Just Disappear? 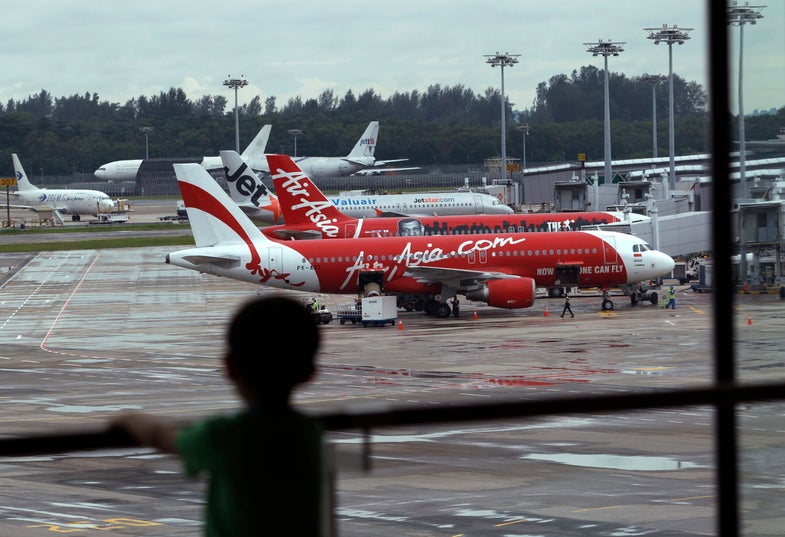 A child looks on at a viewing gallery overlooking AirAsia planes on the tarmac at Changi Airport in Singapore December 29, 2014. The missing AirAsia plane carrying 162 people is presumed to have crashed off the Indonesian coast, an official said on Monday, as countries in the region offered to help Jakarta in the search and recovery effort. The Indonesia AirAsia plane, an Airbus A320-200, disappeared after its pilot failed to get permission to alter course to avoid bad weather during a flight from the Indonesian city of Surabaya to Singapore on Sunday. REUTERS/Edgar Su (SINGAPORE - Tags: TRANSPORT DISASTER) - RTR4JGUT. © Edgar Su / Reuters
SHARE

Over the weekend, the world was gripped by a tragic, yet eerily familiar, occurrence. On Sunday morning, AirAsia QZ8501, an Airbus A320-200 aircraft flying from Indonesia to Singapore, disappeared from radar above the Java Sea, prompting extensive search and rescue efforts in the region. The flight was carrying 162 people.

The event evokes memories of the loss of Malaysia Airlines Flight 370, which also disappeared from radar screens in March of this year. While these two instances occurred relatively close together in time, the chances of such high-profile planes falling off the radar without any warning are extremely rare — especially within the same year.

“It’s unusual that if they were in some kind of emergency, that the pilots didn’t come back with a mayday or some kind of emergency declaration,” Vernon Grose, a former investigator for the National Transportation Safety Board and former scientist for the Federal Aviation Administration, tells Popular Science. “However, if the force of nature was sufficient and tore the wings off the airplane, the pilots wouldn’t have any time to communicate. But that’s pretty rare that you have two accidents like this so close to each other in the same year.”

“That’s pretty rare that you have two accidents like this so close to each other in the same year.”

To establish the location of an airplane, air traffic controllers use two types of radar. Primary radar consists of electromagnetic signals that bounce off any objects they encounter, indicating where the plane is physically in the sky. Secondary radar works by sending signals to a plane’s transponder, which then sends back signals indicating where the plane is and how fast it’s moving.

It’s not yet clear if the most recent AirAsia flight went missing from primary or secondary radar. If a natural force caused immediate destruction to the plane or caused electrical power to go out, the transponder would no longer work, and the plane would be lost on secondary radar, yet still visible via primary radar. However, if the plane fell at an extremely high speed, it would disappear from both radar systems.

Pilots also keep in touch with air traffic control over the radio, and the Aircraft Communications Addressing and Reporting System (ACARS) can transmit super short text messages via radio signals or satellites. As Grose noted, pilots will typically use one of these systems to indicate to ground control that something is wrong before a plane vanishes. Just before disappearing, the pilot of AirAsia QZ8501 asked air traffic control to change its route to avoid clouds, indicating the plane may have encountered disastrous weather conditions. However, a distress call was never made. 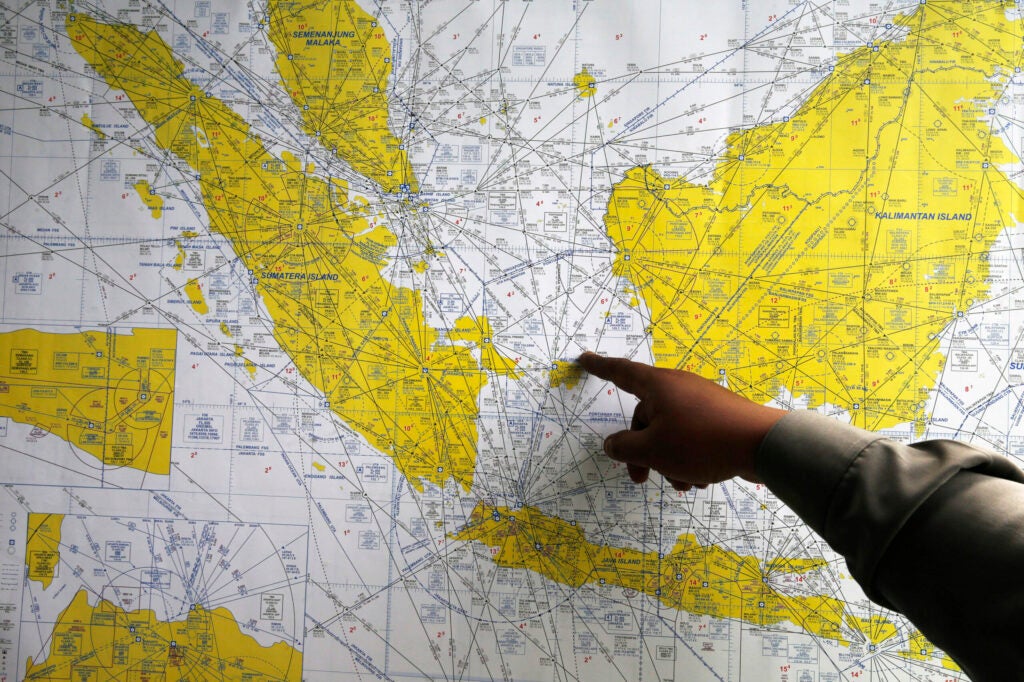 An Indonesian policeman points at a map of Indonesia at a crisis center in Juanda International Airport, Surabaya. The missing AirAsia flight QZ8501 carrying 162 people is presumed to have crashed off the Indonesian coast, an official said on Monday.

According to Grose, the lack of a mayday means that whatever happened to AirAsia QZ8501 likely occurred extremely quickly, either taking out the plane’s electrical systems or incapacitating the pilots. However, there is a diversity of opportunities for communication failure to happen before a plane disappears.

“If the plane’s falling, and all the power’s been blown out by an explosion, you’ll have no communication,” says Grose. “If the crew’s unconscious or dead, there’s no communication. Or they may not take the option to communicate; they could be so busy trying to bring the plane down safely,” as was likely the case with Air France Flight 447, which crashed into the Atlantic Ocean in 2009. “So there are a number of reasons why, as the airplane descends, you wouldn’t have communication.”

There are also numerous subtle ways pilots can lose communication with the ground, including switching to the wrong frequency or incorrectly setting the aircraft radio panel. Since the pilots successfully communicated with ground control minutes before vanishing, those scenarios seem unlikely.

And of course, terrorism is also a concern, as it was with Malaysia Airlines Flight 370, in which the captain was suspected of potentially tampering with the plane’s autopilot. (The cause of Flight 370 has yet to be determined.) However, Grose says he has personally ruled out terrorism as a factor in the AirAsia disappearance, believing worsening weather conditions are to blame.

As for any type of connection between the Malaysia Airlines Flight 370 and AirAsia QZ8501, Grose says it’s incredibly unlikely and that people shouldn’t speculate further until the wreckage from the planes can be retrieved. If anything, the tragedy simply adds to a terrible year for Malaysian aviation: AirAsia is headquartered in the Southeast Asian country, as is Malaysia Airlines, which lost a second plane this year after Flight MH 17 was shot down over Ukraine in July.

“That just says that life itself isn’t predictable,” Grose says. “It’s tragic and ironic that Malaysia airplanes have had three tragedies in less than a year.”