The thrill and physics of flying upside down

What does it actually mean to do a barrel roll in an aircraft? 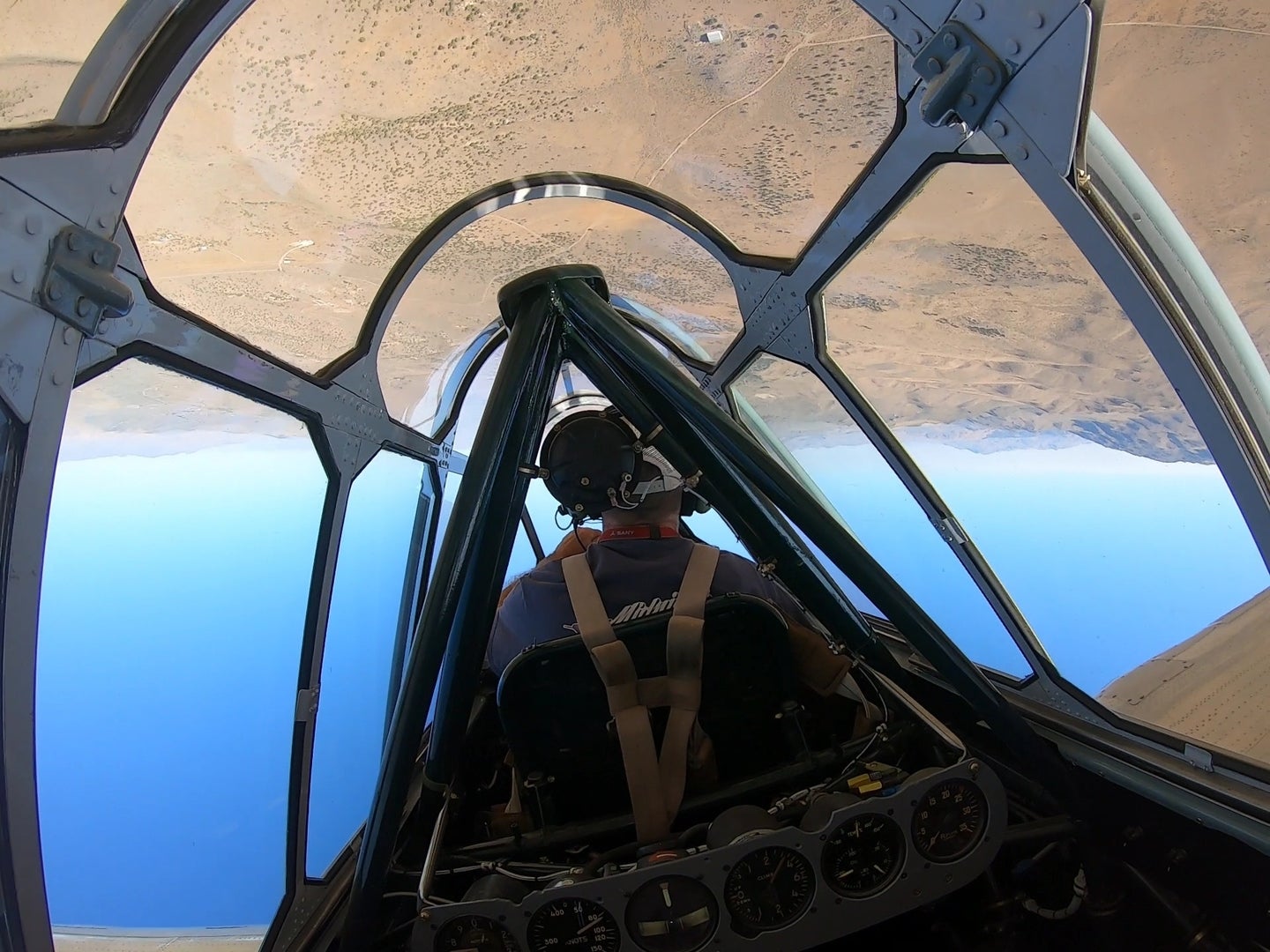 Flying in a silver airplane over the brown desert hills of Nevada, pilot Dennis Buehn prepared to roll us by pointing the plane’s nose upwards above the horizon. I was strapped in behind him, in the only other seat in the 38-foot long plane, and felt a push backwards as we climbed. He then deftly executed an aileron roll, quickly steering the aircraft upside-down and then right-side up again.

“Wow. Oh my god,” I said. I remember a brief feeling of disorientation, but the flip was over in seconds.

Just a few minutes later, Buehn landed his AT-6C aircraft—a restored plane originally made in 1942—at Reno Stead Airport. “[The] airplane’s quite capable of a lot more,” Buehn, a veteran of the Vietnam War and former test pilot school instructor with the Air Force, told me after the flight, leaning on the plane’s wing.

Unless they hop in a small aerobatic plane, most people don’t have the chance to fly inverted. Instead they sit upright on commercial flights, eating peanuts and watching movies like they would at home. But rolling in a T-6 or similar aircraft is a classic maneuver that’s worth trying out, or at least thinking about, if you’re in the I-love-flying camp.

That moment in the T-6 wasn’t my first time flying upside down. That honor goes to a physically punishing flight in an Air Force F-16, during which my pilot momentarily inverted us at the end of a steep climb, and then, later on, gently and slowly rolled the aircraft upside-down and back again. I said the exact same thing that time: “Wow. Oh my god.”

Just roll with it

Rolls actually come in different forms—aviators perform aileron rolls, point rolls, barrel rolls, and slow rolls—and pilots can discuss or debate their subtleties. You might think that the barrel roll is the simplest, but that stunt is actually slightly more complex than you imagine: It involves part of a loop within the roll where the plane changes heading mid-maneuver. A pilot flying north who does a barrel roll will briefly be oriented west or east during the stunt. Ultimately, the simplest way of thinking about a generic roll is that the plane rotates around on its long axis from upright to upside down to rightside-up again.

It’s also possible for a pilot to roll a plane in a way that the G-forces (known as just Gs in the aviation community) stay positive, so that someone doesn’t feel pulled upside down by the Earth’s gravity. The effect is such that a glass of tea on the dashboard could stay unspilled. That’s different from, say, flying steady and inverted, which leaves the pilot and passenger hanging upside down from the restraining belts; or flying with the wings consistently perpendicular to the ground, in which case you’re hanging sideways from your harness—a maneuver I experienced during that F-16 flight.

The most famous rolls in history may be the ones that aviator Alvin “Tex” Johnston demonstrated over Washington state in 1955—in a big Boeing 707 prototype aircraft. Transport airliners are not certified for aerobatic flight, so pilots are not supposed to do that; aerobatic-class planes are designed to withstand a certain number of positive and negative Gs, which makes them suitable for rolls and loops.

“When we talk about aerobatic maneuvers, there’s roll, loop, spin,” says Richard P. Anderson, a professor of aerospace engineering at Embry-Riddle Aeronautical University and a pilot. Most aerobatics combine those three actions in some way. “The roll is certainly one of the fundamental maneuvers that you do, and it’s one of the first ones you do in aerobatics,” he explains.

Become one with the plane

Mastering the roll helps pilots learn more about their relationship to the plane they fly and its abilities. It’s pretty eye opening for the passenger, too. “The roll is a classic maneuver that really broadens the perspective of pilots in the awareness of what an aircraft is capable of doing,” says Brian Dillman, an associate professor of aviation and transportation technology at Purdue University and a pilot. “They become more a part of the airplane through this whole experience” and see the aircraft as “an extension of themselves, rather than a machine that they sit in.”

Aerodynamically, “the airplane doesn’t know you’re upside down,” Dillman adds; the plane is just reacting to the medium flowing around it. One aspect that pilots have to consider, though, while the plane is inverted, is the angle of attack that the wings have against the oncoming air: They might need to bring the nose of the plane up more than they would when flying right side up, so that the wings still produce the right amount of lift.

Dillman says that one exercise he likes to do with student pilots to get them familiar with flying inverted is to have them point at the airspeed indicator in the cockpit, both when they’re right side up and upside down. That teaches them that no matter the plane’s orientation, the physical relationship between the pilot and the cockpit instruments remains the same. (Think about sitting at your desk, but suddenly the room flips. Your computer mouse would be in the same spot and hand as before, and the text on your screen would still be right-side up.)

Some pilots realize during that moment that “the relationship [of the instruments to them] hasn’t changed,” Dillman says. “It’s just that the picture outside is different.”

Popular Science was on the ground (and in the air) in Nevada covering the Reno air races. Check out our gallery of aircraft at the event, a by-the-numbers breakdown of the high-speed aviation competition in the desert, and a glimpse at the past and future of the planes fighter pilots train in.

This story was originally published on October 1, 2019.