Most Concussions Happen During Practice For Student Football Players

Here's what can be done 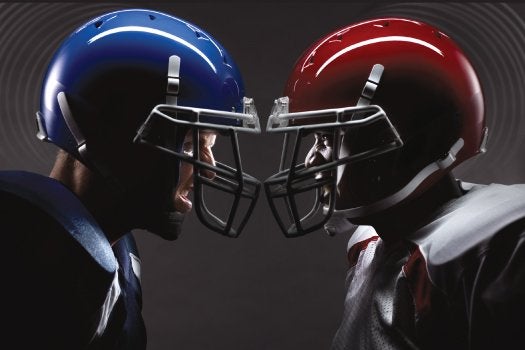 Over the past few years, research and some high-profile incidents have illuminated the harmful long-term effects that concussions can have on football players’ brains. Repeated head injuries can lead to personality changes, memory loss, speech problems, and rapid neurological degeneration. Football concussions are on the rise, and they don’t just happen to the pros–younger athletes get them, too, starting from their first peewee league. And according to a study published today in JAMA Pediatrics, concussions aren’t just happening during game time–high school and college players actually had a higher number of concussions during practices.

In the study, the researchers tracked thousands of non-professional football players ages 5 to 23 over the course of two seasons. Collectively the teams reported around 1,200 concussions. For youth players, these concussions were more frequent during games, but for high school and college teams, about 57 percent of the concussions that players received were because of practice. College students had the most concussions overall, with about 4 per 1,000 players.

There are a number of reasons for this discrepancy, according to a Reuter‘s article. One reason is that older kids simply have more practices, and the players are larger and able to do more damage. Even as late as high school, coaches are still teaching players to tackle properly, one expert says, and they erroneously think that the only way to do so is to pit players against one another. But other reasons for this high concussion rate are more nuanced–coaches may not be trained to recognize the signs of a concussion, or players feel a greater stigma in reporting a head injury.

Policies from league administrators can limit how much time players are in direct contact or can eliminate some of the most harmful drills altogether. And while the study authors aren’t calling for a moratorium on football altogether, they do write that they are “concerned,” noting that these issues need to be addressed, especially for players with long careers ahead of them.