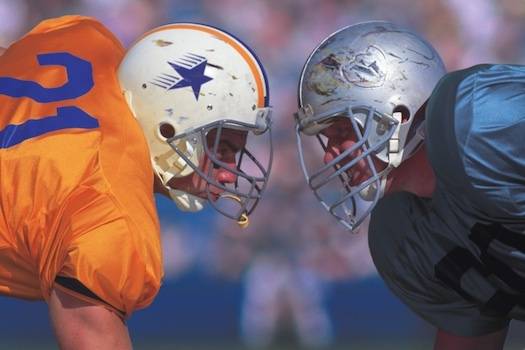 Last week, an autopsy revealed that Cullen Finnerty, a former college quarterback who in May went missing in the woods of Lake County, Michigan, had chronic traumatic encephalopathy, or CTE, the degenerative brain disease at the forefront of the debate over connections between head injuries, professional football and brain damage.

CTE is associated with memory issues, speech abnormalities, and behavior and personality changes. The problem is, some scientists still doubt whether or not the disease even exists. A controversial new study from the Journal of the International Neuropsychological Society suggests that it may not be its own unique neurodegenerative disorder, and that the cognitive impairments of football players don’t look very different from those experienced by the general population.

Christopher Randolph, the study’s first author and a professor of neurology at Loyola University Medical Center in Chicago, says we don’t yet have adequate research to draw direct connections between football and neurological issues.

***
There’s not sufficient evidence to justify the assumption that CTE exists.CTE is typically only diagnosed in dead brains, during autopsy, as was the case with Finnerty. Earlier this year, a breakthrough study scanned the brains of five (still living) former players and found a buildup of an abnormal protein called tau, in patterns consistent with those found in CTE-diagnosed brains during autopsy.

However, Randolph says that doesn’t necessarily point to football-related cognitive impairment. “The question really is, does having tau in your brain mean anything?” he told PopularScience.com. “There’s not sufficient evidence to justify the assumption that CTE exists at this point.”

***
This isn’t the first study to question the validity of CTE diagnoses. An Australian study from April of this year also expressed skepticism. “At present, there are no published epidemiological, cross-sectional or prospective studies relating to modern CTE,” the researchers wrote. “[T]he speculation that repeated concussion or subconcussive impacts cause CTE remains unproven.”

In Randolph’s study, a group of 513 former players and their spouses completed a health questionnaire to determine whether they were exhibiting signs of mild cognitive impairment–issues in memory and cognitive functioning that would be noticeable to an observer, but haven’t progressed to the point of getting in the way of daily life. Studies of cognitive impairment often focus on the responses of a spouse or family member, since people with cognitive issues might not be aware of the extent to which they are impaired. Later, 41 players who were identified as being probable cases for mild cognitive impairment came into the lab to undergo in-person testing, including MRI scanning to rule out the possibility that the impairment was caused by something like a tumor, and neuropsychological testing to look for patterns in language, memory and attention issues. 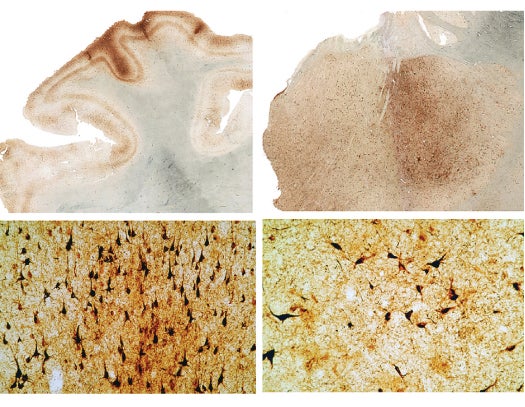 Dark spots in the brain of a former football player correspond to the buildup of tau protein.

The study found that retired NFL players had a higher incidence of mild cognitive impairment than the general population–35 percent of the spouse-reported sample exhibited signs of clinically significant impairment, compared to a previously published rate of 5 percent prevalence for men under 75. “This is certainly suggestive of the possibility that there is an increased incidence of late-life cognitive impairment in retired NFL players,” the researchers write, but they also warn that since there was no control group available to compare with, it’s too early to draw conclusions in this realm.

Significantly, the study also found that former football players’ conditions didn’t look very different from anyone else with the same level of cognitive impairment due to, say, Alzheimer’s. This suggests that CTE might not be its own, unique disease, according to Randolph. “Different neurodegenerative diseases have very different cognitive profiles,” he says. Though they all involve some sort of cognitive impairment, diseases like Huntington’s, Alzheimer’s and Progressive supranuclear palsy (PST) differ in the patterns of degeneration they cause.

Chris Nowinski is a co-director of the Center for the Study of Traumatic Encephalopathy at the Boston University School of Medicine. He calls it “preposterous” that Randolph’s study concluded CTE might not be its own disease because the retired football players had impairments similar to those of other patients with mild cognitive impairment.

It’s like saying, ‘Cancer is found in lots of different places. It could be in the brain, it could be in the liver, so it’s just cancer. There’s no reason to distinguish between the two.'”This paper shows a lack of understanding of neuropathology,” he says. The finding that retired football players showed similar attention and memory problems to people with mild cognitive impairment (MCI) is to be expected, according to him. “We know that the MCI population and the CTE population both have damage in the medial temporal lobe and the frontal lobe. The difference is where the damage is outside of those areas.”

“All along folks have been saying the differences are behavioral and executive. That those are the things they didn’t test, that’s the most clear and surprising flaw in the study,” he explains. “‘It’s like saying, ‘Well, cancer is found in lots of different places. It could be in the brain, it could be in the liver, so it’s just cancer. There’s no reason to distinguish between the two.'”

Still, “no one disagrees that there needs to be a lot more done on CTE,” Nowinski says.

But even if CTE might not be a disease in its own right, as this paper argues, the potential link between football and brain damage hasn’t been disproven. Football players might still be at higher risks for Alzheimer’s or another neurodegenerative disease. To start, Randolph advocates a controlled epidemiological study using a random sampling of retired NFL players and demographically-matched non-athletes, which could more definitively say whether or not cognitive impairment has a higher prevalence among retired NFL players than the general population.*

This sentence originally stated that Randolph advocates a random, controlled epidemiological study. It has been updated for clarity.