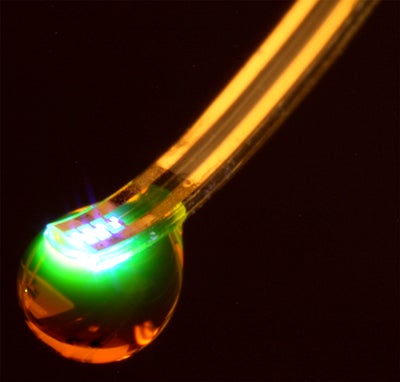 Researchers have a hard time understanding how tiny changes to networks of neurons in an animal’s brain can affect its behavior. Now a team of researchers has figured out a way to tinker with the neural networks of mice in real time, using a wireless controller that can both shine light on the brain and deliver drugs to it. The device even lets scientists control the movements of their test mice from afar.

Neural circuits are thought to be key for various neurological disorders having to do with stress, depression, addiction, and pain—researchers can study them by adding various chemicals or light to neurons to mimic the disease. But observing or manipulating neural circuits to figure out how they work has been notoriously difficult. When researchers do tests on mice, the animals have to be awake and moving around, but the devices to monitor their brain activity are usually hooked up to wires, so they can’t move freely. When they’re implanted, the devices often displace a substantial amount of the mouse’s brain tissue, which could change the outcome of the experiments.

In this recent study, published last week in Cell, researchers tested a device made of soft materials and just one-tenth the width of a human hair—much less invasive than the devices typically used in drug injection experiments. The devices were also hooked up to tiny batteries so that they didn’t need to be attached to wires and contained reservoirs of the drugs or viruses that they wanted to test so that they could be injected wirelessly. 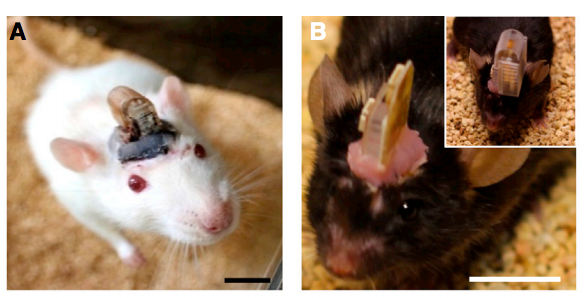 Mice with the device implanted.

To test the devices, researchers implanted them in the brains of several mice, which were put in a cage about three feet from the remote control. The device allowed them to precisely map the mice’s neural circuits by injecting viruses that label cells with genetic dyes. By injecting a morphine-like drug to the ventral tegmental area (VTA) of the brain that controls motivation and addiction, the researchers made the mice walk in circles. Viruses injected into the mice’s brains using the device made certain neurons in the VTA very sensitive to light; when the researchers shined light on those neurons using the device, the mice stayed only on one side of their cage.

In the study the researchers provide explicit instructions for how to manufacture the device, which contains four LEDs and has the capacity to inject four different chemicals or drugs into the mice’s brains. The researchers hope that other scientists will use their plans to discover more about how neural networks work to create or treat diseases.