What Happens To A Football Player’s Brain During A Concussion?

Inside the injury that could destroy the NFL 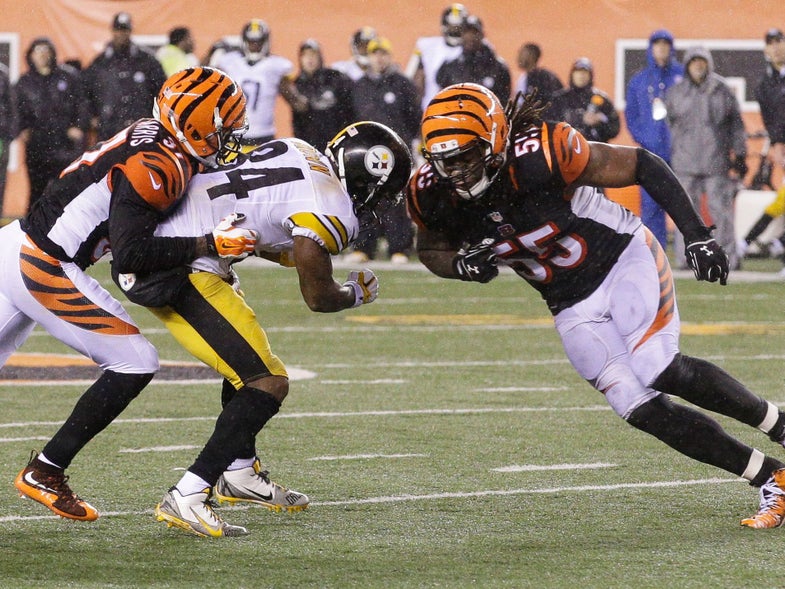 No matter who you root for during this Sunday’s Super Bowl 50, a showdown between the Denver Broncos and the Carolina Panthers, you can be sure the competition will be so fierce that there will be an estimated 130-plus plays hundreds of hits, tackles, spears, and lay outs. For a young and healthy athlete, that can lead to serious brain trauma.

According to the NFL, there were 271 documented game-related concussions this past season — the most recorded by the league since 2011. Roughly one-third of those were caused by helmet-to-helmet contact. One of the worst of those hits occurred in January, during a grinding back-and-forth playoff match between Cincinnati Bengals and the Pittsburgh Steelers, a game generally regarded as one of the season’s dirtiest.

How dirty? With 22 seconds left in the game, the Steelers’ star wide receiver, Antonio Brown, was mid air, ready to catch a ball that he hoped would put the Steelers within range of a game-winning field goal. Instead, Bengals’ linebacker Vontaze Burfict launched himself at Brown as he came down, slamming his helmet (which in the NFL can weighs four to six pounds) into the side of Brown’s head, whipping it sideways on his brain stem. The hit, at an estimated 707 miles per hour, carried about 1600 pounds of tackling force. It flattened Brown on his back, seemingly knocking him unconscious. Jim Nantz, the NFL’s normally unflappable play-by-play guy, was apoplectic, calling the assault “disgraceful.”

The Steelers, who ended up winning the game 18 – 16, later said Brown had suffered “concussion like symptoms.” In the NFL, that’s code for ‘has a concussion.’ But a concussion is only part of the story. What happens to the brain when hit by a linebacker (or cornerback or defensive lineman) is a fascinating and disturbing mixture of physics, biology and human frailty. The victim is left groggy and in pain, and can suffer devastating physical, mental, and even emotional injuries life.

To peek under the cranium at the moment of impact, Popular Science spoke to Dr. Robert Cantu, a co-director at Boston University’s Chronic Traumatic Encephalopathy (CTE) Center. He is also a clinical professor of neurosurgery at the university’s School of Medicine. He told us what mostly likely went on inside Brown’s head that day.

As Burfict slammed into the left side of Brown’s head, he twisted it up and to the right. The slo-mo is painful just to watch. According to Cantu, a hit like that would lead to a textbook rotational concussion, among the worst a player can suffer. There are several things happening inside Brown’s skull, the moment of impact. Brown’s brain begins to twist and spin. It does this in the opposite direction of the hit and inside his skull’s cerebrospinal fluid, a clear fluid that cushions the brain. In that same moment, his brain’s nerve fibers stretch and rotate.

Picture the brain as a bowl of grey spaghetti that is suddenly flung out of an airplane. Those noodles would stretch. Some would snap from the pressure while others would merely thin out in a way that would damage the sensitive neurons.

A large percentage of NFL concussions are the results of T-bone hits (at the ear hole) or right between the eyes. These hits rattle the brain’s center of gravity. What they do is make the brain to rock dangerously backwards and forward, repeatedly hitting the skull. In young athletes (think teenagers), the brain is flush with the bone. So this effect is not as pronounced as in older players, who have a one-eighth to a quarter-inch space, more room for the brain to ricochet off the skull, and thus to cause more harm.

Helmet-to-helmet hits can reach between 100 and 150 on the G-force scale (for comparison, consider that an F-16 fighter jet rolling in a turn has a G-force load of nine). Blows to the side of the head, like the that laid out Brown, are far more dangerous. The spinning a brain undergoes during a rotational concussion can cause significant structural issues.

As Brown’s body recoils, his brain continues swirling back and forth before finally oscillating to a stop. That’s where things fade to black, both in Brown’s consciousness and in our scientific understanding.

There’s a lot about concussions we just don’t know. For instance, as Stanford bio-engineer David Camarillo recently told PBS KQED’s Quest blog, a hit as high as 150 Gs may not cause a concussion at all. But a hit of about 50 Gs, roughly the force of really strong punch in the face, can waylay a player for weeks. We do know, however, that one of the serious issues is the wobbling of the brain. “The exertion caused by a rotational hit puts a much greater degree of stretch and strain on the nerve tissue than a linear hit,” says Cantu. “It isn’t just going in one direction. It is going side to side, front and back.”

Cantu continues, “Everybody recognizes that rotational forces are more likely to cause nerve cells and their fibers to actually break, and have a higher chance of causing blood vessels to be stretched beyond their ability to stay intact.”

As soon as Brown’s head is hit, his brain violently accelerates. Neurotransmitters — chemicals that allow neurons to communicate with each other — are released, but since the trauma is so great, these neurotransmitters are chaotic and rendered effectively useless. At the same time, the new membranes surrounding the brain’s neuronal cells stretch so thin that ions like potassium and sodium flow out of the neurons and into the fluid-packed extracellular space. These ions are quickly replaced by calcium, which flows into the cell and basically paralyzes the neuron.

The cell is unable to transmit nerve impulses. So what you have is a cell that is alive, but is greatly impaired and nonfunctioning. Cantu calls it “an energy crisis in the brain.” And it can last not just minutes, but for months. That means whatever responsibility that cell controls, whether it be memory, speech or rage control, it can’t do its job. “So if the cell affects vision, you won’t see properly,” says Cantu.

Microseconds after the ion chemical reaction, Brown’s nerve cells and fibers start to stretch. Once the blood vessels in those parts break, microscopic hemorrhages occur. Doctors using specialty MRI scans have seen these ruptures in injured NFL players as tiny holes where vessels have bled out. If the vessels bleed into the brain’s tissue, the fluid could kill neurons, which can already be in bad shape from a hit as severe as Brown’s.

Scientists do not know how to measure the number of cells injured in a concussion. They just don’t know. But for athletes who suffer from CTE, a degenerative condition that can only be diagnosed through autopsy (90 out 94 former NFL players who authorized the examination over the past eight years have had it), the cell death is crippling. It leads to massive atrophy in the medial surface of the brain’s temporal lobe. That’s the region and area of the brain that is associated, in part, with memory and language. If the cells don’t have enough rehab time (say, a player takes the field too soon), they “tip over,” says Cantu, and die, causing brown stains to develop throughout that region (a phenomenon noted by medical examiners during autopsies on NFL players).

So far, scientists have identified 26 symptoms that can develop, depending on which areas of the brain are affected. For example, if a majority of the dead cells are located in the cerebellum (i.e. back of the head), players can lose their ability to balance properly. If they die off in the labyrinthine, which is located near the inner ear and is responsible for hearing, they might suffer dizziness and tinnitus. Or if the frontal and temporal lobes are inflicted, they might have trouble retrieving memories, making new ones, controlling their impulses, and keeping anger in check.

As Brown laid motionless on his back, just seconds after the hit, the cascade of ions fleeing his nerve cells continued. That exodus would likely remain steady for days (if not weeks or months) afterward. Almost instantly, there is an inflammatory response to address the dysfunction in the nerve cells. Other cells, known as microglia, bombard the affected brain areas and create inflammation to plug the leaking fluids. The symptoms can last from a week to ten days (80 percent of concussions) to a month (10 percent).

According to Cantu, Brown’s body doesn’t necessarily reboot while he’s sprawled on his back. “His neural impulses wouldn’t be normal, which means his reaction times are slow, his coordination is acutely off, and he could suffer from a cluster of symptoms,” he says. In other concussions, these symptoms have included fatigue, sensibility to light, irritability, and depression.

It’s unclear if Brown still suffers from concussion-like symptoms. If his injury is anything like other high-profile hits, he won’t have an easy road. In the months preceding, and following, Brown’s televised and talked about hit, and avalanche of NFL players have gone public with their own disabilities and fears. In January, former Pittsburgh and Washington wide receiver Antwaan Randle El told the Pittsburgh Post-Gazette that he suffers severe memory loss and is unable to even walk down the stairs. He is 36 years old. That same month, wide receiver Calvin Johnson (nicknamed Megatron for his unique blend of athleticism, strength, and absurdly soft hands), announced he will retire from the Detroit Lions at age 30 likely because of fears relating to his post-retirement health (Johnson hasn’t elaborated on his thought process, but it is not hard to connect the dots).

Within the past two years, roughly a dozen other current, and mostly young, players have permanently stepped away from the game because of health concerns (i.e. watching legends and idols like Junior Seau, Dave Duerson, and Terry Long waste away due to the ravages of CTE and then ultimately commit suicide).

Among the most injured is Adrian Coxson, a rookie wide receiver for the Green Bay Packers. This past August, during preseason practice, he was diagnosed with a Grade 3 concussion (the most severe on the diagnosis scale). He never took the field again, retiring before the 2015 season even began. He told the National Football Post following his decision, “The next hit to my head could possibly kill me or be life damaging.”

Science is hoping to learn more about concussive injuries from the players themselves, during life and death. Oakland Raiders’ quarterback Ken Stabler, nicknamed the Snake for the years he spent engineering harrowing runs through defensive formations, suffered from CTE and died of colon cancer last summer. He donated his roughly three-pound brain to Cantu’s CTE Center for analysis.

“The very severity of the disease, at least that we’re seeing in American football players, seems to correlate with the duration of play. The longer they play, the more severe we see it,” Dr. McKee told the New York Times.

So as we couch surf our way to our way through Sunday’s Super Bowl, keep an eye on the Cam Newtons and Peyton Mannings and Josh Normans. The number and types of hits each one suffers during their careers takes a collective toll. While concussion headlines have overtaken the actual science of these injuries, everyone hopes that will soon change, hopefully before anyone becomes another victim like Ken Stabler.