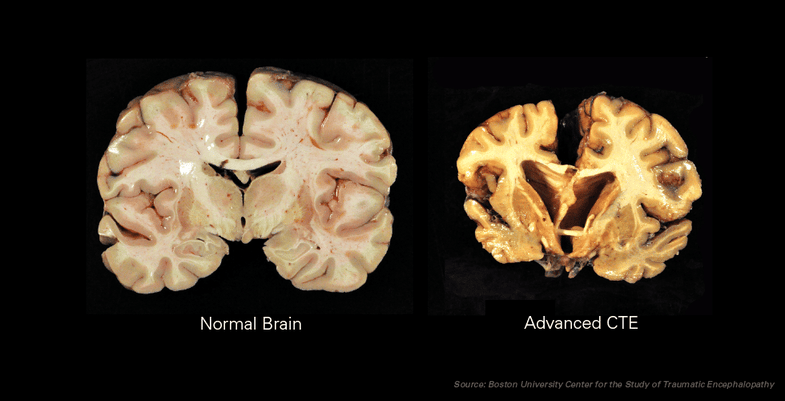 After decades of research, the tragic suicides of several former pro football players, and even a movie, we are starting to grasp the devastating effects of chronic traumatic encephalopathy (CTE), a degenerative brain disease caused by repeated head injuries like concussions. Now researchers have looked beyond the pros and found that trauma from recreational sports may bring on the condition, according to a study published in this month’s issue of the journal Acta Neuropathologica.

For the study, researchers analyzed clinical records for patients who had donated their brains to the Mayo Clinic Brain Bank and selected 66 patients that were known to have participated in contact sports as young adults. When the researchers examined their brain tissue, they found that 32 percent of the patients showed distinctive signs of CTE . They also discovered two genetic markers that might make patients more susceptible to CTE, since they only appeared in the genetic makeup of patients who had developed the disease.

While these findings may seem disturbing, it’s important to look at them with some caveats. This study is the first to analyze brains in a brain bank for signs of CTE, and it’s one of the first to determine the presence of the disorder using the guidelines established by the NIH—guidelines that are likely to shift as more studies are done on similar brain banks. The sample size is also quite small, as Bloomberg News points out, especially if it’s supposed to be representative of the overall population as the researchers claim. Also, the researchers note that some of the patients included in their study suffered from dementia; while CTE often appears with other neurodegenerative conditions, the diseases may play a role in each other’s development, muddying the specific effects of CTE.

The researchers note that their findings (especially those about the biomarkers for CTE susceptibility) need to be studied with a larger cohort. And although mounting evidence for the damaging effects of contact sports has been making some parents think twice about enrolling their kids in peewee football, the researchers don’t want parents to interpret this study as discouragement from athletics. “The purpose of our study is not to discourage children and adults from participating in sports because we believe the mental and physical health benefits are great,” said Kevin Bieniek, the study’s lead author, in a press release. The hope, he added, is that studies like this one can help researchers and coaches develop more effective ways to protect the brains of young athletes.