Megapixels: This swamp is full of frozen gator snouts

But don't worry, they're just fine. 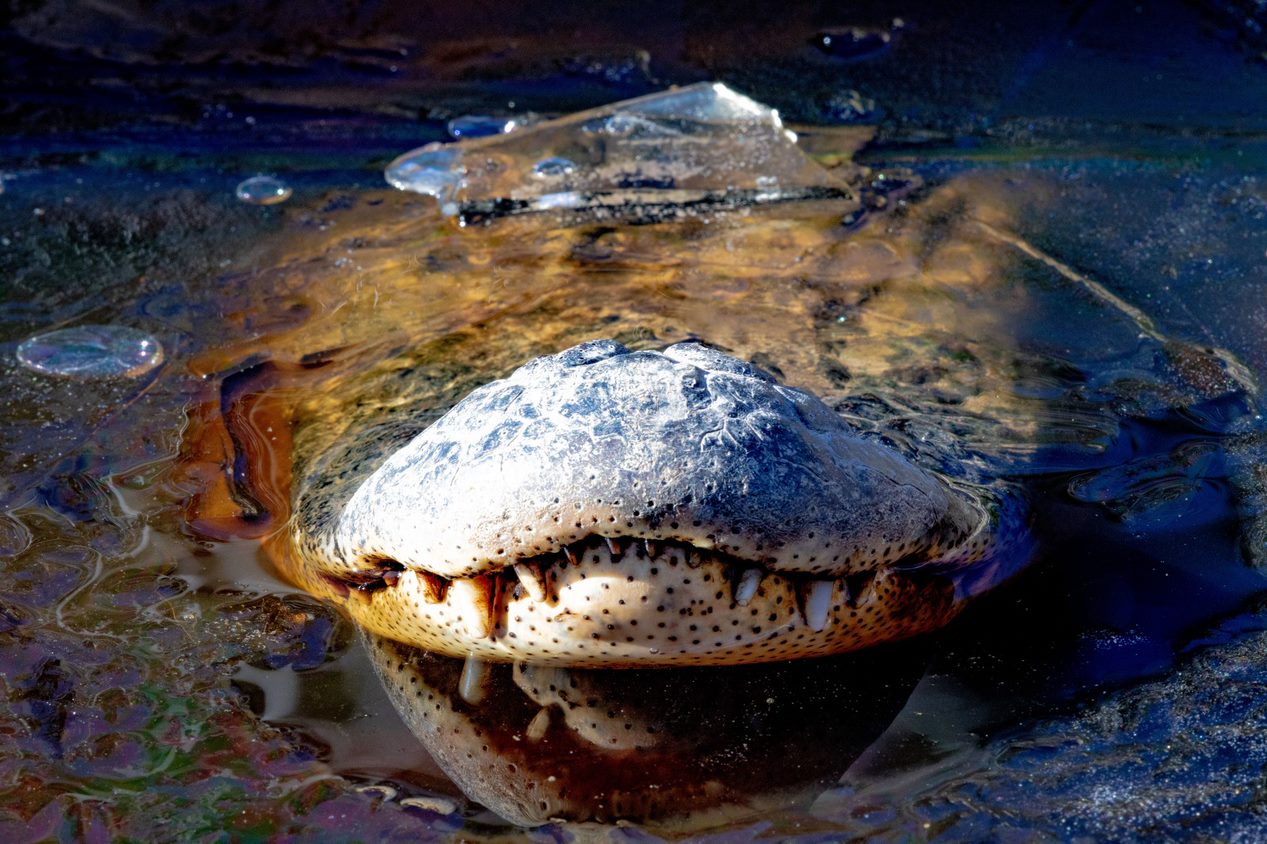 If you’re a human, you deal with especially chilly days by bundling up in a hat, coat, and scarf. If you’re an alligator, you dip under the water and embrace the freeze.

Above, you can see some of the reptilian residents of Shallotte River Swamp Park all tucked in for a wintery nap. The North Carolina park saw similar behavior last year, when temperatures dipped below freezing and General Manager George Howard noticed what he thought were the offshoots of cypress tree roots jutting out of the ice. In fact, the swamp’s alligators had poked their snouts up above the water just as the surface froze over, which allowed them to access an oxygen supply while the cold water eased their bodies into a deep snooze.

This survival technique is called brumation, a sort-of-kind-of hibernation used by cold-blooded animals. Remember those iguanas that keep freezing and falling out of trees in Florida? Same thing. And just as those stiff, gray iguanas pop right back to their green and springy selves with a little warm sunlight, the rescue alligators at River Swamp Park will soon be back to their usual swimming and snapping.

You’d be forgiven for thinking the alligators must surely be dead or at least distressed—last year, so many folks thought the lake was full of frozen gator corpses that Howard pulled one out of the ice to prove it was still alive. Reptiles can’t warm themselves up when the world around them gets cold, so brumation saves them by slowing down all their bodily functions and conserving energy.

The biggest difference between this and mammalian hibernation is that it varies depending on the temperature. While hibernating animals literally go to sleep for a seasonal stretch, reptiles can still conduct a lot of their usual business during brumation. A few days stuck in the ice is an extreme scenario; during cold-but-not-freezing weather, alligators will eat less than usual (or not at all), grow lethargic, and snuggle down into relatively toasty mud deep below the surface. But they’ll still drink water, according to the South Carolina Aquarium, and they emerge on warm days to bask in the sun. In 2018, River Swamp Park’s gators quickly reemerged to enjoy more typical North Carolina weather once the cold snap ended, though “enjoy” might be too strong a word—temperatures in the 60s are still decidedly frigid by an alligator’s standards. They were healthy but cranky, which is understandable given the circumstances. Why don’t you try getting stuck in a frozen swamp?