On the 40th anniversary of the Apollo 11 moon landing, it seems like every news outlet worth its weight in... 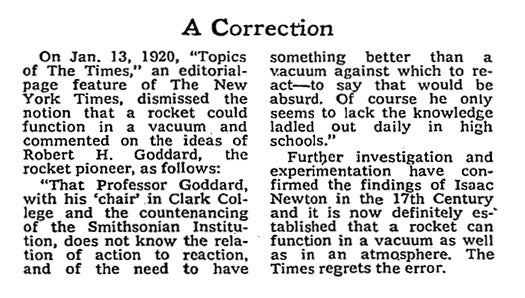 On the 40th anniversary of the Apollo 11 moon landing, it seems like every news outlet worth its weight in regolith is reproducing classic content to put the historic moment in the proper content. Well, here’s one Apollo-related news item, printed on July 17th, as Aldrin, Armstrong and Collins were well on their way to the Moon, that I doubt the New York Times wants to draw much attention to today: a retraction of a 1920 article which stated rocket motors couldn’t work in the vacuum of space, almost fifty years after the fact.

JULY 17, 1969: On Jan. 13, 1920, Topics of The Times, an editorial-page feature of The New York Times, dismissed the notion that a rocket could function in a vacuum and commented on the ideas of Robert H. Goddard, the rocket pioneer, as follows.

“That Professor Goddard, with his ‘chair’ in Clark College and the countenancing of the Smithsonian Institution, does not know the relation of action to reaction, and of the need to have something better than a vacuum against which to react — to say that would be absurd. Of course he only seems to lack the knowledge ladled out daily in high schools.” [Oh, snap!]

Further investigation and experimentation have confirmed the findings of Isaac Newton in the 17th century and it is now definitely established that a rocket can function in a vacuum as well as in an atmosphere. The Times regrets the error.”

I love this, not because of how wrong the NYT turned out to be, but because of how right the editors thought they were. It’s a nice reminder of how one man’s ridiculed notion can turn into reality a few decades later. Take note, Robert Bigelow, Richard Branson, Elon Musk, and the like.

Unfortunately, this correction came about 24 years after Goddard’s death (the cause of which was, surprisingly, not a rocket to the face) but you’ve got to love the idea of some editor digging this editorial up, waiting to see if Apollo 11 made it into space, and then hastily writing a correction.

The Gray Lady, however, held fast on its assertion that Orange Tang is nasty.