PharmaSat to Test Drugs in Space

Ever wonder whether antibiotics work in orbit? NASA has 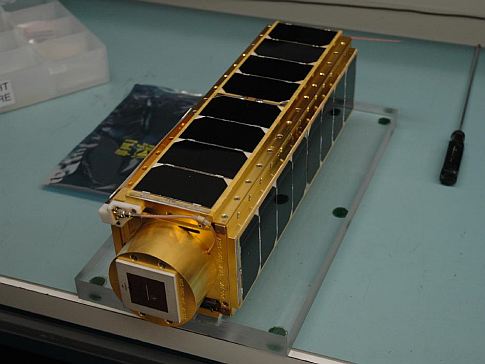 It’s miserable enough to be under the weather in the comfort of your home, but imagine coming down with a bad cold when you’re stuck inside a small crew module 200,000 miles from Earth. You’re coughing on your fellow astronauts and that space food you ate half an hour ago is now floating around your zero-gravity spacecraft.

Luckily, mission control packed some antibiotics into your survival pack… but will they work in space?

Microgravity can impact living organisms in a variety of ways, and now NASA researchers want to find out how it affects pharmaceuticals. On May 5, a small satellite about the size of a loaf of bread will launch as a secondary payload on a U.S. Air Force Minotaur 1 rocket. Weighing in at about 10 pounds, the nanosatellite — called PharmaSat — houses a micro-laboratory with sensors that can detect the growth, density, and health of yeast cells. When NASA spaceflight engineers make contact with PharmaSat, which could happen as soon as one hour after launch, they will send a command to the satellite to initiate a 96-hour experiment, which involves administering an antifungal treatment to yeast cells at three dosage levels.

After PharmaSat separates from the Minotaur 1 rocket and enters orbit at approximately 285 miles above Earth, it will begin transmitting radio signals to two ground control stations, in Menlo Park and Santa Clara, California. The primary ground station at Menlo Park will then transmit mission data in near-real time to mission managers, engineers, and project scientists at NASA’s Ames Research Center for further analysis. The nanosatellite could transmit data for up to six months.

In addition to monitoring the yeast’s reaction to the antifungal treatment, PharmaSat will also record the pressure, temperature, and acceleration levels that the yeast and the satellite are exposed to while orbiting Earth at 17,000 miles per hour. The results of the mission will help researchers learn more about drug action and effectiveness in space.

“PharmaSat is an important experiment that will yield new information about the susceptibility of microbes to antibiotics in the space environment,” said David Niesel, PharmaSat’s co-investigator from the University of Texas Medical Branch Department of Pathology and Microbiology and Immunology in Galveston.

The U.S. Air Force rocket will launch sometime during a three-hour launch window beginning at 8 p.m. EDT on May 5. To view the launch via webcast, visit http://sites.wff.nasa.gov/webcast//.