There’s plastic in your poop, but we have no idea how dangerous that is

Microplastics are showing up everywhere. 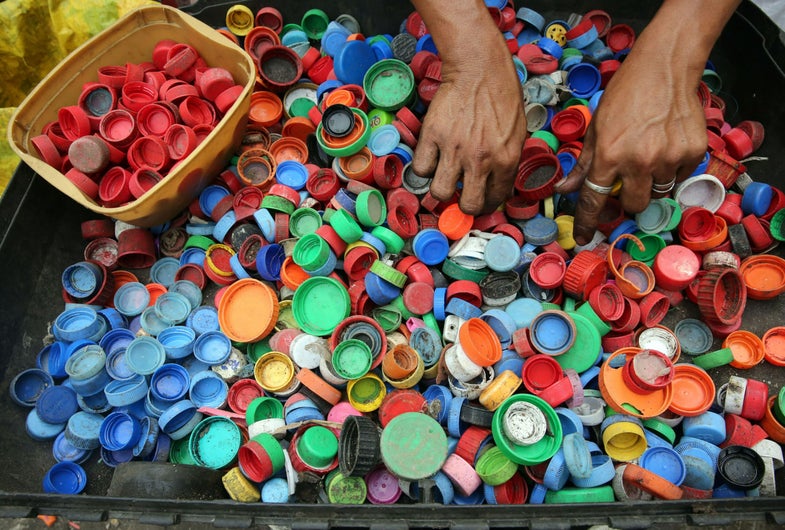 Humans love plastic. We put it on and in everything from food wraps to face wash, and in doing so we also send it off to distant oceans and the dusty corners of our homes in the form of microplastics.

These tiny bits of polymer infiltrate almost everywhere, and likely wrapped around the globe before we even realized they existed. And now, we’re finding them in our poop. (They’ve probably been there a while, too.) Researchers at the Medical University of Vienna and the Environment Agency Austria are the first to find microplastics in human stool samples. They plan to present their findings at United European Gastroenterology Week this week.

While the news that your poop likely contains tiny bits of plastic might seem alarming, scientists have suspected this for years now. After all, microplastics have popped up pretty much everywhere we’ve looked. They’re in beer, shellfish, tap water, and even the air in your house. One study even suggested that you could get a large proportion of your microplastic exposure from air particles falling onto your food.

We’re rapidly realizing how ubiquitous microplastics are, but we still know little else about them.

What exactly are microplastics?

The commonly cited figure you see is the technical definition of a microplastic: any piece smaller than five millimeters (that’s 0.02 inches) in diameter. For reference, a strand of spaghetti is about two millimeters wide, and a standard round aspirin pill is about 14 millimeters across. Those figures might make you wonder why you haven’t been noticing bits of plastic in your food. Surely they’d be crunchy at that size. And you’re right—that’s the upper limit for a microplastic piece, but it’s not necessarily the standard.

Again, we don’t have much data about the average size of the microplastic pieces in the world, but a lot of the bits we find in food and water are more on the scale of nanometers—microscopic, in other words. Some of the pieces aren’t, though, like the beads in some exfoliating face washes that have come under fire in recent years for making their way, by the millions, directly into oceans, streams, and lakes. And some of the fragments found in this most recent study did reach the five millimeter mark, even though the participants probably had no idea they were swallowing bits that big.

Where are all these particles coming from?

Every time you wash synthetic fibers like fleece or polyester, they can release microscopic plastic fibers that end up in the water supply. When you drive your car, bits of ground rubber come off and wash away in the next rain. Microplastics even come from the unintentional breakdown of the products we use every day like straws and grocery bags and takeout containers. They come from the paint on boats and the nylon in fishing nets. Heck, some of it is from people flushing their contact lenses down the toilet (stop doing that!).

The point is, microplastic comes from almost everywhere because we’ve put plastic almost everywhere. But like all things, plastic breaks down over time. Even minuscule bits that chip away add up across a population of 7.5 billion.

How do I end up eating them?

Because microplastics end up in our water supply they can end up in beverages like beer, and because we also wash particles into the ocean they can end up inside fish and crustaceans, which humans then eat. But as mentioned before, some microplastics also settle onto your plate from the air. Researchers at Heriot-Watt University found that the average U.K. citizen might consume 10,000 particles per year just from household dust.

What are they doing to me?

We really have no idea at this point. A 2017 editorial in The Lancet Planetary Health summed it up well: “Microplastic contamination seems more widespread than we perhaps knew, and they are regularly being ingested by people worldwide. Most concerning is how little is known about the effects of microplastic consumption on human health.”

We’re only just beginning to figure out how much plastic might be inside our bodies—this European study is the first to show that it’s accumulating in our guts—but we’re still not sure what kinds of problems it might pose. Fragments might physically damage internal organs or could leach chemicals. And as that same editorial points out, it will be difficult to study the effects because microplastic is so ubiquitous. We’ll have to look across populations who have varying levels of exposure and try to correlate it with health effects, which won’t be a very exact way to study but will likely be the only way. We can’t exactly do a clinical trial where physicians would deliberately dose patients with tiny plastic beads.

Caution, then, is key. Plastic fragments aren’t likely to be good for us—at best, they’ll be neutral. But it can’t hurt to try to reduce our exposure.

How can I avoid microplastic?

Unfortunately, you probably can’t totally eliminate microplastic from your diet. As we said, this stuff is literally in the air you’re breathing. The best you can do is avoid some of the more obvious routes of exposure. Plastic water bottles shed fragments, as do plastic takeout containers and other food packaging. Reducing your use of all these may help you minimize your plastic intake. Beyond that, vote for politicians who will advocate for better environmental regulations. Bottle deposit programs and charges for single-use plastic bags in stores have helped countries like the U.K. and Germany increase their recycling rates to above 95 percent and decrease their disposable bag usage by 80 percent. Measures like these could help solve the problem at its source.