Tuberculosis’ Game Of Hide And Tweak 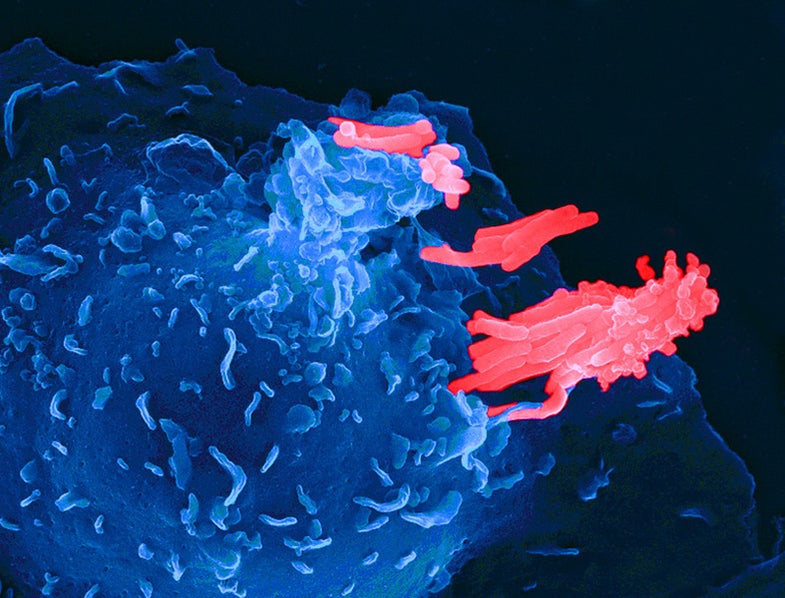 If you’re looking for the perfect pathogen, you need look no further than Mycobacterium tuberculosis. This bacterium has been a scourge on human health for millennia and taken countless lives. Even today, up to a third of the world’s population is infected and over a million lives are lost.

The reason behind tuberculosis’ infection perfection comes from its [mechanism](http://www.omicsonline.org/vaccines-against-mycobacterium-tuberculosis-exploring-alternate/ strategies-to-combat-a-near-perfect-pathogen-2161-1068.S1-003.php?aid=12610) of pathogenesis. If the bacterium can enter and establish itself in the lower respiratory tract, an immediate battle is initiated in which the immune system attempts to kill the invader. It’s usually unsuccessful as the pathogen has several routes to evade attack.

Over time, a microscopic cold war is initiated in which various branches of immunity attempt to take on the bacteria but never seem to accomplish the mission. This silent combat can continue for years until finally, the immune system is drained allowing the bacterium to take over and eventually consume the lungs. The prognosis at this point is dire.

Until the 1940s, there was no effective therapy for the disease. But the advent of antibiotics signaled a change in the dynamics. A variety of antibiotics was found to have activity against M. tuberculosis and became standardized as treatment to clear the infection. But that apparent victory was short-lived as resistance became rampant in the 1990s. The rise led the World Health Organization to declare the disease had returned and was now a crisis for global public health.

The routes to antibiotic resistance are numerous and are due to a variety of factors such as lipid metabolism, DNA mutation, and maintenance of the cell wall. One particular mechanism of importance is known as efflux in which the bacterium develops a means to shuttle the antibiotic out of the cell so it cannot cause troubles. How this characteristic arises, however, has been the subject of much debate.

Efflux is conducted by several proteins found in the cell wall known as pumps. In M. tuberculosis, these efflux pumps are present at all times. Some can deal with antibiotics but they are usually not expressed at high enough levels to prevent death. But when there is sub-lethal exposure to these drugs, the pumps are produced en masse and save the cell from destruction. It’s one of the reasons why following treatments to the letter is so important.

Yet, resistance can still occur in those who adhere to the program meaning other factors occurring within the lungs may be contributing to the trouble. However, finding those molecular processes is an exercise in frustration as examining the cellular activity within the lungs of an infected person is almost impossible in real time. Models need to be made to mimic the situation and hopefully, find some answers along the way.

Last month, a team of researchers from South Africa and America unveiled such a model. They developed a laboratory-based culture system in which they could replicate combat between the bacterium and a particular member of the immune system. What they found was that a hallmark mechanism of infection could also lead to the development of resistance.

The group worked with a relative of the bacterium, M. smegmatis. This species is a surrogate for the more dangerous tuberculosis. This substitution meant experiments could be done without restrictive bio-containment protocols.

To mimic the biological world, the researchers developed a microfluidic device to grow the bacteria. But, their target wasn’t the lung tissue. Instead, they wanted to explore the intracellular environment of an immune cell, the macrophage.

The decision came as a result of a known stage in the battle between the immune system and the pathogen. When infection begins, many of the bacteria are taken into macrophages in order to be killed. But, tuberculosis has a specific mechanism to halt this killing process allowing it to live inside the cell. Here, it can grow, multiply, and eventually spread without any threat from the circulating immune cells on the outside. According to the team, this could be where resistance develops.

With everything in place, the next step was to add antibiotics. A number of current choices were used including rifampicin, isoniazid, ofloxacin and hygromycin. The team expected the bacteria to evade all the antibiotics over time but they were surprised to see resistance emerge against only one of the drugs, rifampicin. A further test revealed the action was due to an efflux mechanism.

The results of the study suggest anyone wanting to fight tuberculosis with rifampicin has to deal with a rather troublesome obstacle. Granted, this study hasn’t been confirmed in actual patients. But if this process is occurring, current treatments may be inadequate.

How to get around this problem is also at the moment a mystery meaning there are no easy answers. Yet, with the model in place, possible options may soon be realized. Although this route may not solve the entire problem of tuberculosis, by at least figuring out how to keep resistance at bay, treatments can continue to be used and eventually, more lives can be saved.