Never Mind the CDC: The Search for Anthrax on the ISS

The recent news of an anthrax containment breach at the CDC was startling to say the least. While the risk... 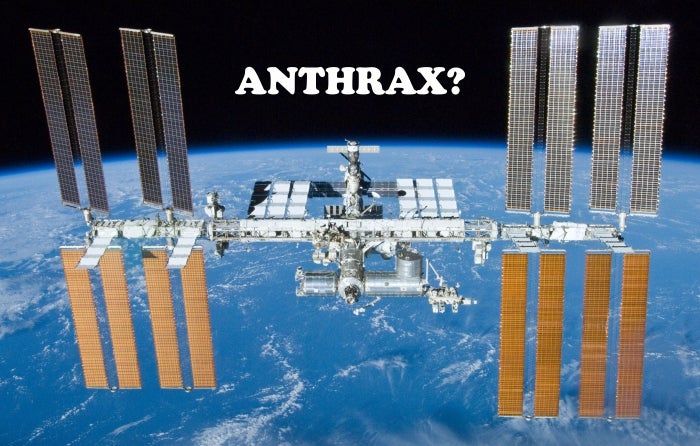 The recent news of an anthrax containment breach at the CDC was startling to say the least. While the risk of infection was low to nil, the news revealed the weakness of even our strongest containment systems. The event also highlighted the potential for widespread infection –particularly from an environmental bacterium such as B. anthracis _– in an enclosed space._

While the CDC has the ability to quickly mitigate and resolve such issues; in other places, such as the International Space Station, the consequences could be dire. A leak of a pathogen as potentially deadly as anthrax during experimentation would leave the crew with limited options for remediation. Aside from experimentation, there is another worry. The development of a microbial ecosystem capable of harboring pathogens may also silently create a rather unwelcome situation and an unexpected crisis.

Unlike research studies, in which the bacteria are known and procedures to prevent and/or mitigate an outbreak are taught and tested, the natural ecosystem is usually unknown. In response, researchers have been working diligently to better understand the nature of the space station microbial ecology and provide some perspective on the health risks to the crew.

The ability of microbes to survive in space has been tested for decades yet experiments to better understand the ecosystem of space didn’t happen until 1996. A joint team of researchers from the United States and Japan sent an enclosed ecosystem onto the Space Shuttle (STS-77) for a 10 day mission. The results suggested there was little to no difference between Earth and space travel with one exception – microbes were found in higher abundance from the space samples. This suggested all microbes could not only survive but also thrive in microgravity conditions. This was good news for those wanting to create extraterrestrial biomes but for infection disease specialists, this certainly was concern.

In 2001, one of the first tests to determine the nature of the microbial ecosystem in space was conducted on both the space shuttle and the Mir space station. They found the presence of environmental and human bacteria as well as fungi in all areas. The results suggested there was a need for regular cleaning and disinfection as well as proper air filtration to keep the space station safe.

By 2004, an American team of researchers tested the bacterial ecosystem of the International Space Station in the hopes of identifying any potential pathogens. They tested the air, surfaces and water and found some 63 bacterial species and 19 fungal isolates. In all cases, the nature of the microbes was environmental and posed no health threat. Yet, as the authors conceded, this was only the initial stage of habitation and the results were helpful in determining a microbial baseline. Over time, the ecosystem would most likely change and the chance for infection could increase.

In the following year, an examination of the water system on the Mir space station highlighted how the situation might be changing. For the most part, the bacteria isolated were environmental in nature and posed no threat. Yet, there were some opportunistic pathogens identified. This could potentially lead to a problem as the immune system of astronauts slowly weakens as a result of extended space flight.

Then in 2013, a Chinese group of researchers described the changes in a known space station inhabitant, Bacillus cereus, after a short space exposure. The bacterium, an opportunistic pathogen and relative of anthrax, demonstrated an increase in its ability to cause infection through upregulation of its endotoxins. The authors suggested there might be an increased risk of B. cereus – or other anthrax-related Bacillus strains – becoming more virulent and posing a risk to astronaut health.

While a theoretical threat was suggested, there was yet no way to show whether the crews were at risk. Earlier this month, however, a team from The Netherlands revealed a new means to identify B. cereus as well as anthrax. The results also left the group with a need to take a deep breath.

The researchers took samples from the Russian section of the ISS – the Zvezda Service Module (DOS-8) – and brought them to their lab in Groningen. There, they attempted to identify genetic markers associated with anthrax and its relatives. As expected, they found B. cereus but that was not all. There were signs of yet another species. At first, they believed they might have found B. anthracis. To be sure, they conducted further analyses – if this was anthrax, it would make headlines around the world. Thankfully, the more rigorous testing revealed this was not a crisis; the isolates were from two other species, B. weihenstephanensis and B. mycoides.

Though this study suggests there is no current risk for anthrax on the ISS, the overall experience points to a need for more attention to the potential of introducing a pathogen on board space vehicles. Moreover, as the authors indicated, testing needs to be accurate such that false positives are minimized and identifications are as confident as possible. This is particularly important for future space travel, including manned missions to Mars, which could happen in as little as a generation from now. Unlike the CDC, should anthrax or any other significant pathogen find its way into the ecosystem, there may be little to no way to prevent disaster.