A New Way To Spy On Microbes 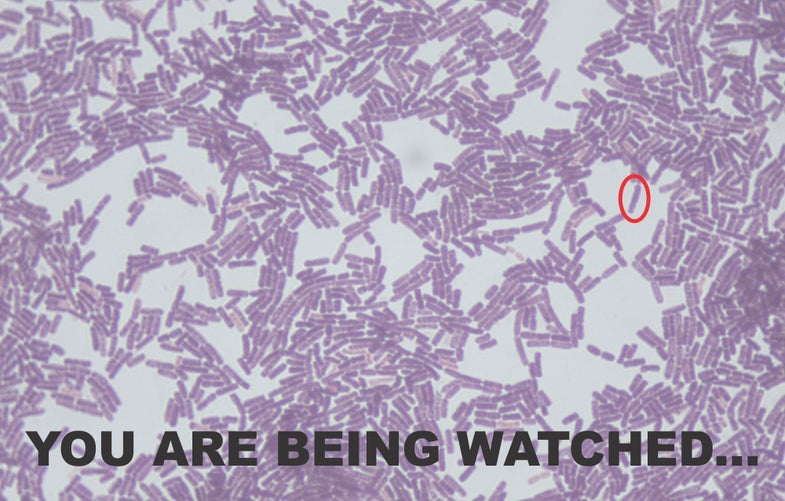 The concept of watching individuals is not a new one. There are already several ways to locate a person and track his or her movements. But the same cannot be said for microbes. The ability to track a single bacterium as it lives is much harder than it seems. Among a population of billions or even trillions, any effort to hone in on one specific member presents a significant challenge. For one, they all generally look alike. They also tend to group in clumps making isolation in situ nearly impossible. Then there is the presence of dead cells; they can still retain the same shape and structure long after they have become inactive.

Despite the odds against the objective, a team of German researchers may have solved the problem. Last week, they provided the first glimpse into a single-bacterium tracking system. Using a combination of microscopy and software, they were able to demonstrate how a single cell can be identified, recognized, and eventually stalked until it is no longer viable.

The group focused on a single species, Bacillus amyloliquefaciens FZB42. The bacterium is an environmental species with the capability to produce several functional byproducts useful to humans including antimicrobials and agents for plant pathogen control. The strain is easy to grow and can be cultured quite efficiently in batch fermentation.

Although ease of growth was a main factor in the choice of B. amyloliquefaciens, the authors chose this strain for an entirely different characteristic. The bacterium is motile thanks to a flagellum. This particular trait provided the ability to track the bacterium over time as a function of its movement. It also gave the authors a simple means to determine if cells were alive or dead.

The process for analysis was relatively simple in design. The team grew the bacteria in a fermenter and then at times, took samples for imaging. Visualization was performed in a unique flow cell with the capability of changing the thickness of the cell. This provided not only the ability to control the number of bacteria entering the area but also the shear force to ensure the flagella were not inadvertently chopped off.

The pictures were taken with a camera which took 15 images over a half -second. The overall result would show either living and moving bacteria or ones incapable of motility and thus considered dead. The camera could also provide other calculable information such as cell shape and size. This aided in identifying those single cells and ensured any observed movement was due to the cell, not the environment.

When the system was in place, the team attempted to identify the cells and whether they were alive or dead. The results were as expected. They could easily identify single living cells based on motility. Even more beneficial was the ability to identify the bacteria regardless of the turbidity of the solution. In a fermentation environment, the liquid will become denser over time and could interfere with the observations. Yet there was no such trouble in this case.

But visualization was only one part of the tracking. The other was to link up the movement, cell size and shape to another critical factor, metabolic state. In a fermentation environment, this is critical to ensure production is consistently at its highest level. Changes in metabolism can directly affect the performance of the system. The team was able to correlate the velocity of motility to the various stages of bacterial growth. Lower motility meant a lower level of performance and the need to reinstate harmony in the culture. The result provided an overview of the entire population without having to perform a number of tests. One look was all they needed to detect any trouble.

The authors suggested this initial stage of testing opened the door to even more observation-based analysis of bacteria under different conditions. This includes variations in nutrient levels, the introduction of bacteriophages, temperature and even oxygen concentrations. Due to the relative ease of the visualization, optimization of any fermentation protocol may be easily achieved. The other benefit could come from widening the scope of bacteria from this one species to others known to have flagella including Escherichia coli.

The concept of tracking bacteria visually may be a major step forward in fermentation but there are other areas in which this particular technique may be useful. Many human pathogens also have flagella and as a result could also be observed using a similar protocol. For anyone undergoing therapeutic treatment to remove infections, a real-time assessment of populations can ultimately help to improve outcome. Moreover, this technique may be able to quickly identify resistance in a population such that antibiotic therapy can be more efficiently provided to ensure resolution and a return to health.