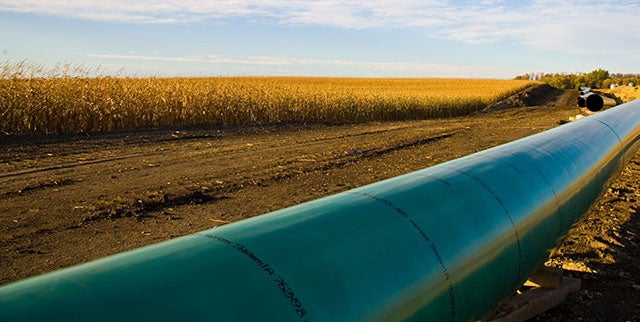 It’s a bit too late for Halloween, but in a move that suggests a Hollywood-style mad scientist putting a fresh corpse into suspended animation, the Canadian company TransCanada is trying to freeze the permit process for its pet project, the proposed Keystone XL oil pipeline. Earlier this evening TransCanada announced that it has sent a letter requesting Secretary of State John Kerry to suspend its permit application for the time being.

The unusual move comes as the project faces yet another delay in its mission to bring crude oil from tar sands fields in Canada, down through the midsection of the U.S. to refineries on the Gulf Coast.

For those of you new to Keystone XL, it’s fair to ask what an oil pipeline has to do with John Kerry, and why this particular pipeline has been taking so long to get off the drawing board.

The answer to the first question is simple. Keystone XL is a huge proposed pipeline (1,179 miles) already partially completed, but whose final stage would cross the border between Canada and the United States, which means it requires the seal of approval from the U.S. Department of State, in addition to any other required domestic permits. TransCanada submitted its initial application to the State Department in 2008.

The answer to the second question is not quite so simple. After all, the US is already webbed with thousands of miles of pipelines for oil and gas, so what’s another thousand or so, give or take?

Think of Keystone XL as a symbol for the wrong project at the wrong time, and the picture becomes a little more clear.

The benefit of the project to U.S. consumers, for example, is not immediately obvious. The price of gasoline has been dropping through the floor without the benefit of new oil from Canada, and the slow but steady emergence of alternative fuel vehicles is providing the driving public with new choices.

TransCanada has also tried to promote Keystone XL as a critical job-creating engine for the U.S. That argument was compelling in the immediate aftermath of the 2008 global financial crash, but a lot has changed since then. The U.S. auto industry has recovered from its near-death experience, and the domestic energy industry is creating thousands of new jobs in the renewable sector.

Since TransCanada is not a U.S. company, Keystone XL also attracted more than the usual attention that a pipeline would face for potential environmental risks, including impacts on Native American treaty lands.

TransCanada’s initial strategy of seizing private property for the pipeline in Nebraska through eminent domain didn’t help matters much, and state-level approval for a less aggressive route through Nebraska have been winding through the courts.

Meanwhile, President Obama has been dropping plenty of hints that Keystone XL does not provide the domestic benefits that would justify federal approval, leading industry observers to predict that a definitive thumbs-down is imminent. Leading Democratic Presidential candidate and former Secretary of State Hillary Clinton has also come out against the pipeline recently (despite currently having no say over its approval), while most of the leading Republican candidates have voiced support for its approval.

In that context, the letter to Secretary Kerry is the corporate version of a Hail Mary pass. TransCanada appears to be holding out hope that if it can suspend the permit process for another 12 months or so, the next U.S. president may be more supportive.

The company could get its answer sooner rather than later. While TransCanada maintains that there is solid precedent for suspending the application, it’s possible that the State Department could turn down the request, and the clock will keep running.