Q&A: How ‘Star Wars’ Creators Made BB-8 Into A Robot Icon

R2-D2 finally gets a robotic rival 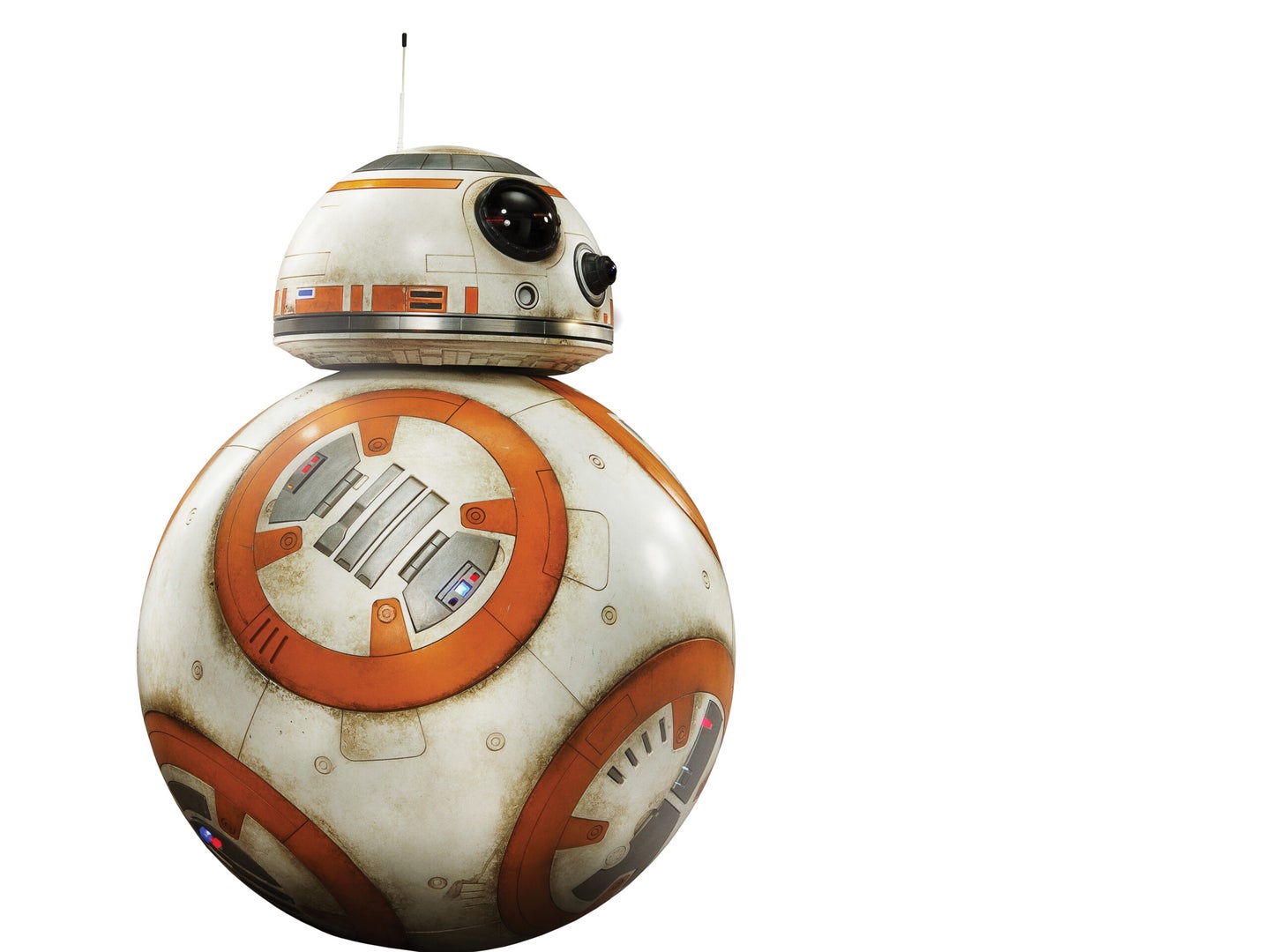 Star Wars: The Force Awakens doesn’t hit theaters until December 18, but it already has a breakout star: BB-8, the endearing ball droid that made its debut in the movie trailer this summer. Rather than rely on computer graphics, director J.J. Abrams asked the film’s creature-effects (CFX) team to create an actual BB-8 in the form of cleverly engineered props. We spoke with Matt Denton, electronic design and development supervisor, and Josh Lee, senior animatronic designer, about the inspiration and inner workings of the most iconic science-fiction robot in years.

Popular Science: How was BB-8 conceived?

Josh Lee: It was J.J.’s idea. We first saw it as a sketch on a napkin that had been scanned and emailed over to us. It caused a lot of head-scratching about how we would achieve it on set. So the first thing I did was build a model out of polystyrene and anything I could lay my hands on. I just wanted to get the movements down—the ball rolling, the head pitching. Instantly it was full of character.

PS: What did you do to give the robot personality?

Lee: You can cock the head. You can roll with the head pitched forward, which gives it a look of intent. As you go around a corner, you can lean the head into the corner to look controlled—but if you lean away, it looks wacky.

Matt Denton: In animatronics, our goal is to make robots not look like robots most of the time. If one looks robotic, usually we’ve failed. We try to make it look emotive and expressive, like an animal.

Lee: With R2 all you can do is rotate the head and make a sound—sad sounds, if he’s sad. To make BB-8 look sad, you can just drop the head. All you have is a head—there are no eyes—but you can do a lot with that.

PS: What was the process of bringing BB-8 to life on the set?

Lee: When we were researching how to technically achieve this design, we thought of several ways of doing it. The first was to actually do it for real—get the head balanced on top of the ball and have that roaming around. It was very tempting, but it wouldn’t have provided the precision of movement you need for filmmaking, or the reliability. So we came up with seven versions for the film—three main ones and some variations.

PS: How were they different?

Lee: One was the wiggler. It didn’t roll around, but it could wiggle its head and body on the spot. We would bolt that to the set or bury a baseboard in the sand. Then we built the trikes because we needed a stable driving version. We motorized the ball and had the head move around on top by means of a curved track system. Motorized castors on the back allowed us to steer it. That version could go over pretty much any terrain. The only thing that defeated it was deep, very fine sand.

And then there was the puppet, which had an axle going through the ball, rods coming out, and a track system for the head. A puppeteer in a blue or green suit would hold the rods, and have very fine control over the head and ball. That’s how we achieved some of the more-subtle acting shots.

PS: And yet another BB-8 rolled on stage at the Star Wars Celebration fan event in Anaheim?

Lee: Yes, in production we used those props. But I couldn’t stop thinking about how we could make BB-8 for real. At Star Wars events you always see R2-D2, so I thought we would need a BB-8 to go down the red carpet. In my spare time—weekends and evenings—I started working on it. And then Matt and I built a proof-of-concept model and showed it to Neal Scanlan [the head of the creature shop]. He showed the producers, and they released a bit of money to make it look like an actual BB-8.

“In animatronics, our goal is to make a robot look emotive and expressive, like an animal.”

PS: Does it work in the same way as the Sphero toy?

Denton: It’s a totally different beast. Sphero is a hamster in a ball, and BB-8 has a head that’s independent of the body so it can spin on the spot.

Lee: The Sphero toys are really fun because they’re madcap and out of control. They roll all over. But when you’re doing an event, you can’t have that. You need to precisely puppeteer it. And that was a big challenge—figuring out how to get rid of all the wobble in a sphere mechanism.

PS: How does BB-8 compare with other animatronic projects that you’ve done?

Lee: It’s entirely unique. It’s the nicest thing I’ve ever made, and it also had the most interesting challenges.

Denton: The crew and the cast got really fond of it. People would sort of chirp at it as we carried it past. On its last day on set, it wrapped like an actor would and got a round of applause. That’s certainly never happened to one of our robots before.

PS: Do you think it will invoke the same love in fans?

Lee: I don’t want to jinx it, but yes [laughs]. It’s been very strange because we spent the last year and a half keeping this massive secret, and now my son’s got a BB-8, and it’s on duvet covers—it’s everywhere.